I bought a nice little house in 2004 that needed some fixing-up. I've always liked older homes, and thankfully found a great girl that likes them too :-)

Anyway, we now live together and I am making steady progress on the layout. Here are a few early photos of what I did to get the space ready. First is of the old oil tank. My buddy Rick wisely suggested that digging this big, 55-year-old guy out from behind a beautiful, finished layout would be a bad idea. This came after installing a new oil burner and boiler: 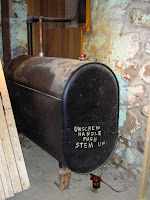 This was a bear of a job, only possible for us thanks to Rick who does it for a living. Long story short, we got the old tank drained and outside, and then discovered that the foundation needed work. (Old homes, yea, I know.) Here's a photo showing the newly-repointed stone foundation, along with a new mortar pad for the new heating tank. In the far right is some of the first benchwork, studs framing out a wall for the layout. 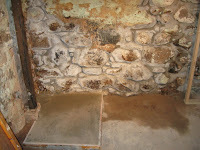 Once that dirty work was done, and a multitude of other plumbing, landscaping, and painting jobs were complete, progress began on the benchwork. Here is the west wall in a fall 2007 photo, coming along bit by bit. 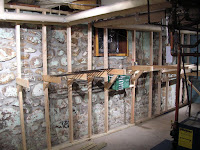 The big turnback loop at the end of the wall has been framed out here, using modified L-girder benchwork made popular by Lynn Westcott's books from Kalmbach Publishing. 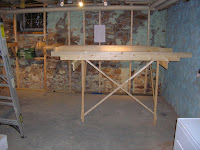 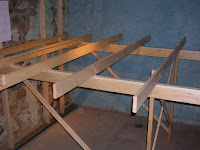 A good view of the benchwork. This will be the frame that supports the 'big turn' area. More to come soon!