The Onondaga Cutoff - On the Cover of Railroad Model Craftsman!

I'd always hoped to be able to contribute to the hobby press, ever since I was a young boy whose only tangible link to the hobby was those same pages of Model Railroader and occasionally Railroad Model Craftsman.  If anyone had told me a few years ago that by summer 2020 I'd be involved with the hobby press with articles, interviews and even a book, I'd have stared at them and blinked, then smiled and asked where I can sign up.

I am excited to announce that the Onondaga Cutoff is featured on the cover of RMC's September 2020 issue, with a feature article inside to boot! 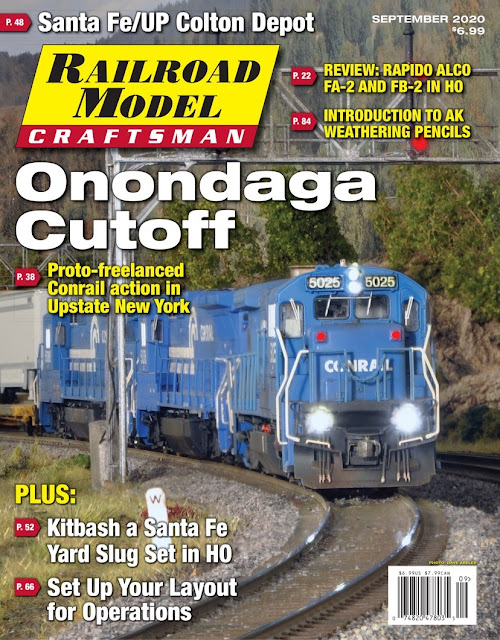 Those monthly magazines were highlights I looked forward to, especially with large color photos of cutting-edge layouts of the time:  Cat Mountain & Santa Fe, Utah Belt, Virginian & Ohio, La Mesa's Tehachapi Pass, Rand Hood's and David Bontranger's Rio Grande work, and many others.  Thanks to good fortune, mentorship and a lot of work learning to improve my writing and photography, several articles have come together and I am grateful to be able to continue that process, and hope maybe someday there's a few young people that in their minds will have added the Onondaga Cutoff to that list of iconic layouts for the hobby.

Pick up a copy at your local hobby shop or book store, or at https://shop.whiteriverproductions.com/products/rmc-202009

There is a great deal to be thankful for!

It is always fun to push the limits in the hobby, and we hit a new milestone in the virtual operations world last night:  a successful test of operations with engineers using remote techniques from overseas to run trains on the Onondaga Cutoff!

Gordy Robinson, about 3,250 miles away in Scotland, and Martyn Jenkins, about 9,600 miles away in Australia worked through the internet to hook their WiThrottle devices to the OC server.  Using Skype for a radio repeater, I spoke into my FRS radio in the layout room, and they heard me in real time in their homes, and replied accordingly.   Incredible! 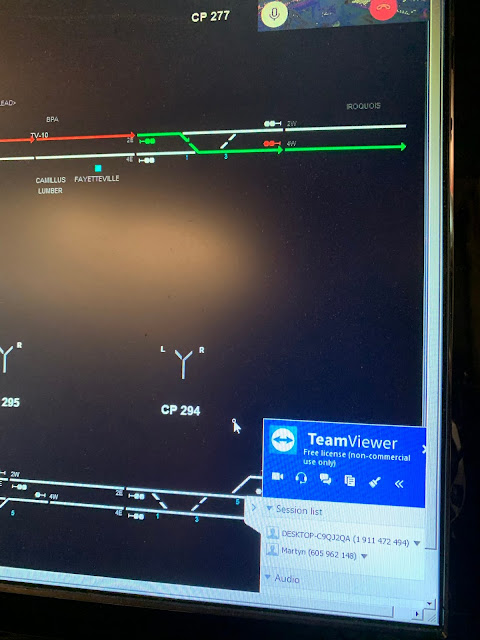 And so, given how well it went and the new level to which this brings the idea of remote operations, we will bring you a live Facebook feed of the first full operation with these two gents participating!

Note that you do NOT need a Facebook account to watch live with us.  An account would allow you to comment in real time but you can watch either way.  Just close out the login box and scroll down to see the video feed.

It will be just after noon on a September day in 1994, with many trains coming.  It is sure to please the trackside railfan.  Hope to 'see' you there tomorrow night!

Posted by RGDave at 4:20 PM No comments:

The railroad hobby is one that allows a tremendous amount of latitude, an ebb and flow to the intensity with which we pursue it.   In a lot of ways it mirrors life.   In both life and the hobby, it's been a year of big things.  For all of us, which is saying quite a bit.   When there are so many big ideas about and on the forefront of so many conversations, the distractions only increase.

But, the fire is still burning, and oftentimes among family activity, time and energy spent on home projects amidst a pandemic, work, kids, and play, there is time to fit in a few small layout projects that help keep the ball rolling.  The smaller projects can be satisfying, too!  One of those popped into my head this past weekend and last night I was able to bring it to fruition.

Conrail's Dash-8 locomotives in the late 1980's were delivered like many road's with standard, conventional cabs and a boxy nose on the short hood.  These noses came with a small grab iron in the middle of the nose.  Atlas Model Railroad Company, a manufacturer of model trains that did some very nice Conrail GE's in HO scale about 20 years ago delivered their models in that manner. 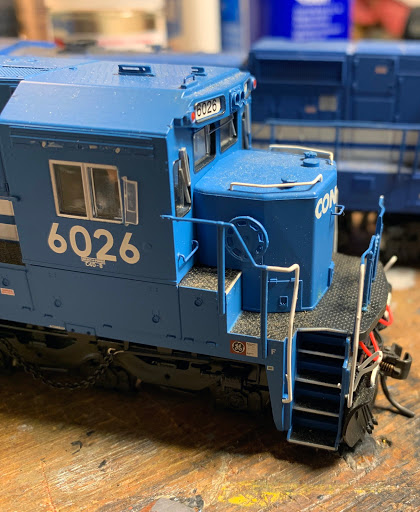 Zooming in a bit, you can see it more clearly: 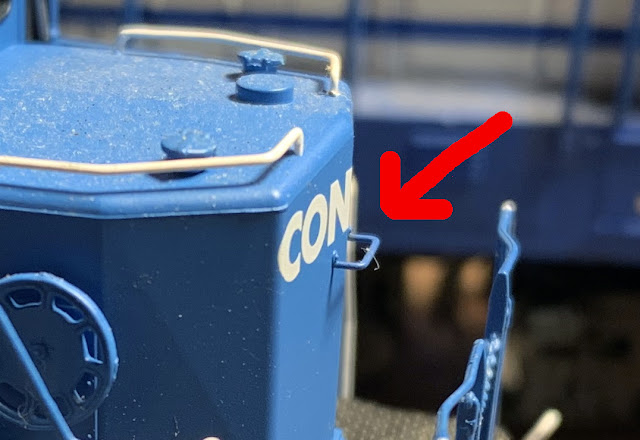 Around 1990, Conrail was changing.  The railroad had gone through more than a decade of cost-cutting, route abandonment, layoffs, and service failures.  The late 70's and early 80's were hard years for railroads and Conrail especially.  Great leadership and willingness to persevere won out, though, and government bail-out money helped to improve track, infrastructure and equipment.   But into the 1990's, Conrail was again an independent railroad company that was working to improve operations for shareholders and customers.  The company, sometime around 1992, made a move to modify each and every conventional cab Dash-8 on the roster to eliminate the small grab seen above and install longer 'pecos bill' grab irons for crews and mechanical personnel.   I am not sure if this was in response to injury or crew suggestion, but in either case the railroad followed through.
Since I am modeling 1994 or so, I needed up the updated grabs.  The tiny wire hoops that came with the models are inserted into holes drilled in the shell.  A quick pry with a needle nose pliers and they slide right out. 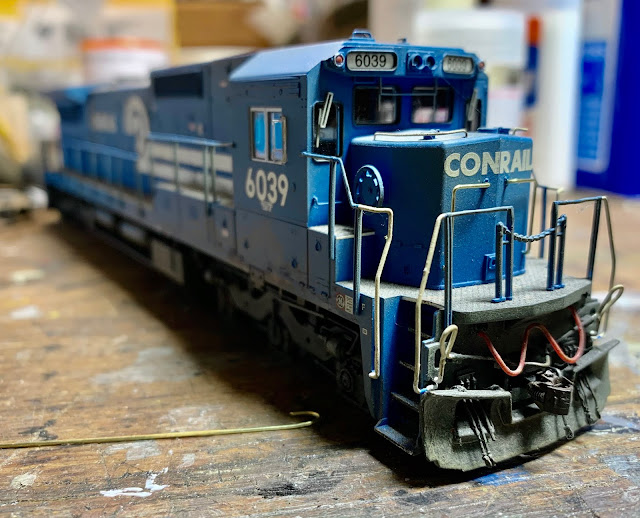 Removal of the small wire grab left two holes perfect for mounting the new railings, and to hold the bottoms I drilled new #74 bit holes.   I then used 0.017" brass wire to model 1" metal railings. 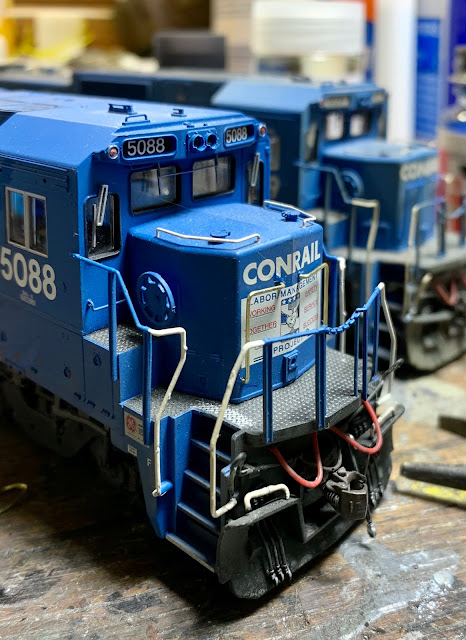 I bent them to fit, secured them with Loctite CA gel, and painted them to match prototype photos. 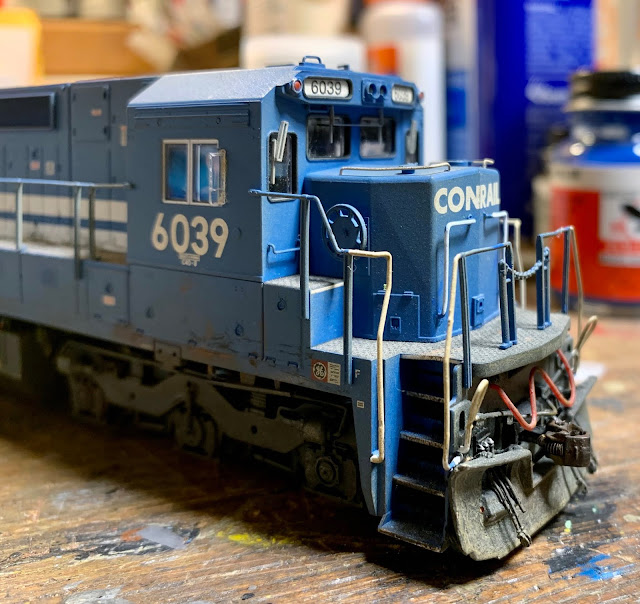 It's a minor change but since it is on the front of the units, it makes a larger impact than I expected.  Just another neat little way to tie the Onondaga Cutoff to Conrail in the middle 1990's!