As a final blog entry for 2013, I have put two new locomotives in service, which will help round out the roster for operating sessions.  Both are factory-painted models to which I added details, weathering, and decoders.  First up is Conrail 6345, a nice model of an EMD SD40.  I added lift rings, the cab roof antenna, grab irons, numerous warning decals, a snowplow, and weathering to this unit.  Here's the 3/4 view: 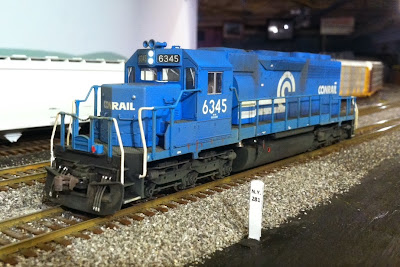 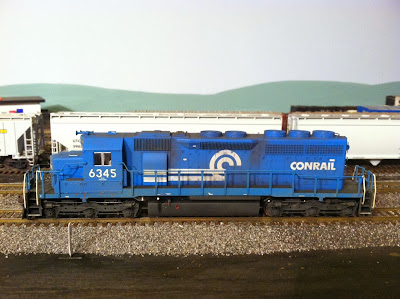 Finally, for the 6345, a cab-level shot showing some of the details and a closer look at the weathering: 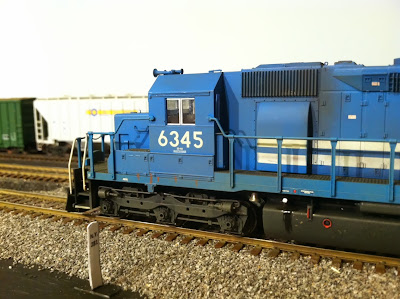 Also, at the request of several regular operators, I went ahead and put another run-through unit in service, the first SP locomotive I've ever finished.  SP 7427, a model of EMD's SD45, is ready for service!  SP power was relatively common on the Chicago Line in the early 1990's, especially on certain trains:  TV-556, TV-79, and SLSE.  This will be a nice compliment to the various D&RGW units I already have in service.  We will start with a 3/4 view: 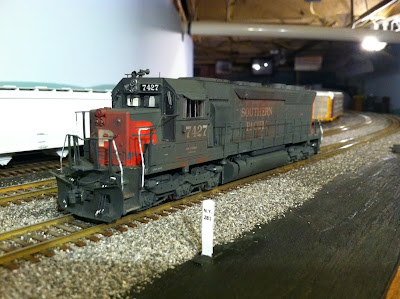 This is an Athearn model in their 'RTR' series, and boy, I am impressed with the details right out of the box.  All I added were a few extra grab irons per the prototype, drop steps, windshield wipers, and lift rings; the rest was pre-applied at the factory.  This was also an opportunity for me to extensively use pastels for weathering, and that was how I obtained the look of the worn paint underneath the dynamic brake blister.  A broadside shows this better: 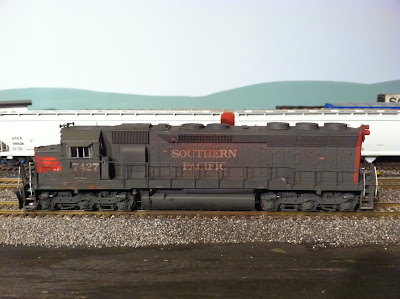 On SP and D&RGW, long, steep grades necessitated extensive use of the dynamic brakes, which created a lot of heat.  That heat was blown out through the grids above the lettering, and over the coarse of years and  years, and thousands of trips on steep hills, paint would fade and blister.  In many cases, you would see the base coat of red beneath the gray, which is what I modeled here.  Further, SP of the 90's was a cash-strapped company, and their image suffered as a result.  Their power was filthy unless it was brand new!  To capture that look, I airbrushed the unit with various washes and made heavy use of pastel chalks.  A cab-level view: 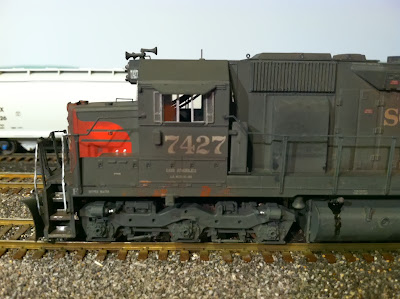 Just to show how much weathering was done, take a look at the photo below - this was how the unit looked straight out of the box: 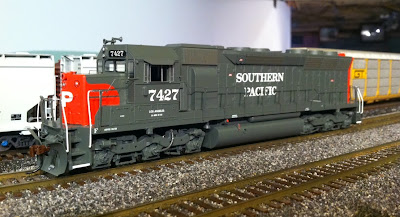 With that, I close the blog out for 2013, with excitement for 2014 and years to come.  2013 has been a fantastic year for me personally and for the Onondaga Cutoff, too.  I am thankful for my family, and especially my patient, strong wife, and for our beautiful, happy little girl.  It's a blessing to be able to make this kind of progress on a model railroad, and to share that with you here and also through regular operating sessions.  This model railroad brings people together and is a lot of fun to build.  For me, this is what the hobby is about.

Email ThisBlogThis!Share to TwitterShare to FacebookShare to Pinterest
Labels: Weathering

With some downtime ahead of the holidays and before the last signal bridges arrive, I decided to get the last of the local control panels (LCP's) in place.  The last two to go in were at CP294 and CP295, and to install those, I needed to install the permanent fascia board at the same time. 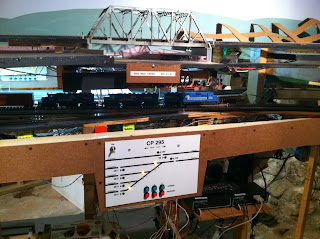 This took more thought than I had planned on - it was difficult to visualize how it would come together, as I did not make the original stringers long enough.  After quite a bit of time staring, beer in hand, at the issue,  I came up with an idea to build a new 'backbone' for the edge of the layout.  To do that, I needed to hang some timber girders to provide direction and support for the LCP's and the fascia.  I built L-girders out of 1X3 lumber, and fastened those girders to the existing stub-end stringers; with some careful measuring and fitting, I had my finished product.  Here's another view: 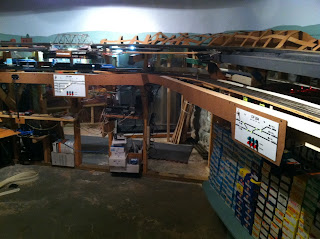 The fascia provides a nice, hard, definite edge to the layout, and finally defines the area that needs scenery.  We are approaching a stage of construction that will be primarily devoted to scenery, and I am looking forward to that.  That's where the magic really comes to full view!

Posted by RGDave at 3:56 PM No comments: