Merry Christmas to all, and Happy Holidays!  Best wishes for you all  in 2011!
Posted by RGDave at 11:41 AM No comments:

In this post, I want to cover a step-by-step process for modifying older 'electrofrog' or 'insulfrog' turnouts for DCC.  It is my opinion that this topic has received little, if any, relevant press.  Some sources say that you simply need to 'isolate the frog from the point and stock rails, and isolate the points from each other.'  Some say 'be careful' or even 'buy new turnouts.'  None of these offer a how-to solution on converting existing turnouts.

This project will save money for all of us building a DCC system who can find older turnouts used, or that matter, have old turnouts lying around, but not yet laid.  For example, I got my 50 Shinohara electrofrog turnouts for $5 each, albeit heavily used.  Regardless, this is much more cost-effective than the $25-$35 you pay for these new!

When you really sit and think about it, however, this process seems trickier than it sounds at first.  I went ahead and experimented.  I destroyed two turnouts in the process, but figured out a way to spend about 20 minutes work per turnout and have a good-looking, DCC-friendly machine in the end.

Frog number - anyone know how this works?  There is a precise trigonometric calculation (cosecants and cotangent angles) used by American railroads, but for our modeling purposes, we can treat it like a ratio of 'rise over run' as European railroad engineers do.  The 'rise' is how far the divergent track diverges per the unit length - so, therefore, the frog number is a geometric ratio of distance-to-offset.  A #4 frog (or #4 turnout) therefore measures four units along the straight route, while moving one unit along the diverging route.  Similarly, a #6 turnout measures 6 units along the straight for every unit diverging.  So, the larger the number, the more gentle the offset, and the more gradual the turnout.

Electrically, it is no secret that 2-rail model railroads generally run on DC power, with each rail an opposite polarity.  For DC railroads, then, with conventional non-DCC power, reversing the polarity reverses the current, and therefore the direction the motor spins.  Turnouts complicate things because rails of opposite polarity cross at the frog.  Therefore, there are two choices:  a permanently-isolated frog, or a frog that changes polarity to match the direction for which the turnout is lined, with that electronic conductivity provided by the point rails closing against the stock rails.   Frogs that are powered by the point rail contacts can cause problems with DCC, as a simple derailment (or out-of-gauge metal wheelset) can cause momentary contact across opposite polarity rails, which can cause quick damage to the sensitive DCC decoders.  Additionally, many manufacturers made turnouts with both opposite points connected by soldered crossbars, riveted in the center to ties or the throwbar, increasing further the chance of a short. 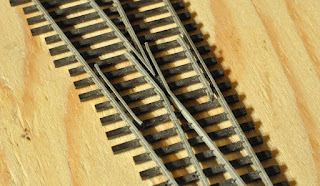 To isolate the frog in any switch where the frog is not isolated, a simple cutting disc in a rotary tool (such as a Dremel) will suffice.  A quick 4000-rpm slice through the 4 approach rails about 1/4" from the ends of the frog will isolate the frog. 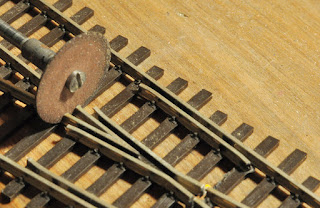 You can then fill these gaps with styrene secured with Cyanoacrylate Adhesive, and file to the profile of the rails, or you can leave them as air gaps.

In most cases, insulated frogs do not adversely affect operation.  For some extremely small-wheelbase locomotives, such as an 0-4-0 steam switcher or an industrial diesel 'critter', there may be a stall issue in higher-number (i.e., longer) frogs (#6, #8, #10, etc.), but everything else should be able to bridge the gap.  In any event, most modern turnout machines (including the Circuitron (r) Tortiose machines I am using) have a power-routing double-pole, double-throw switch internal to the machine that allows for automatic power routing to the frog.

The key here is that the point rails need power, especially if you have insulated frogs as described above, so that there are no stalls.  In some many older turnouts, the points are soldered together by means of metal crossbars, which are in turn riveted to the plastic ties or throwbar.  See the photo below. 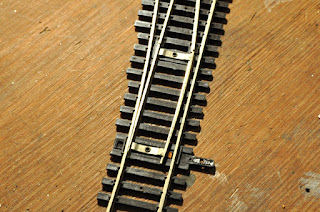 How does one isolate each rail if, by design, they are soldered together and riveted as one to the ties?

First, keeping the general alignment of the points is crucial for throw machines to align the points correctly after modification.  (I screwed this up, but was able to work around it).  My method was to carefully cut strips of .15" thick styrene from a sheet to fit between the ties, perpendicular to the points, and to secure these from below with small dabs of Walthers GOO adhesive on each point rail.  I put two on the points, one on each end, mounting them from below, several ties from the rivets. 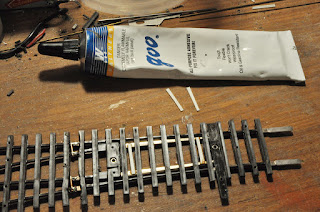 Once that cures overnight, I used my Dremel tool and cutting disc to cut vertically through the metal connection bars and their copper contacts beneath.  This caused a mess, but thanks to the styrene strips, the points held their gauge.  I used an x-acto knife to clean up the burrs caused by the cutting disc.  In the photo below, see the slice in the heel-point connector bar. 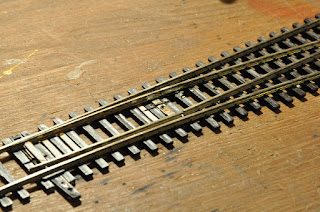 Once that is complete, the addition of several more styrene strips beneath the points and two on top of the point assembly over the old connections stiffens up the modification and improves the overall look as well.  Again, an overnight cure will allow all to set up well. 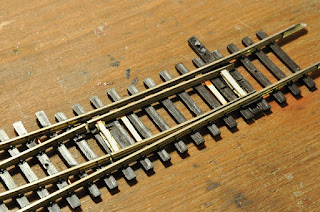 I test the isolation by hooking the turnout to a conventional transformer, throwing the turnout, and then checking for shorts if I bridge a point rail with the adjacent stock rail.  If there are no shorts, then my isolation is complete!

Finally, we need to make a modification to connect the now-isolated point rails to the stock rails to match their polarity, which in turn will be soldered to feeders and the bus.  Since each point rail only needs to be connected to the adjacent stock rail, small 1/4" pieces of scrap brass or copper can be soldered, creating an electrical bridge (e-bridge) to the points.

Early on in this process, I invested in a resistance soldering machine, which has been nothing short of a Godsend for wiring.  While a regular pencil iron works best for bus/feeder connections, the resistance machine is CRUCIAL for small, neat joints between feeders and rail, and in this case between e-bridges and point rails.

To install the e-bridges, I place the turnout upside down the work bench, then use a razor saw to remove the plastic webbing between ties.  With the rail bottoms exposed, buff the nickel-silver bottom of the rails with a wire disc on your Dremel, apply a dab of flux and 1/4" piece of brass wire, then resistance-solder the wire in place.  Work quickly to avoid melting and warping the nearby ties.  If they do melt, use the x-acto blade or any tool to straighten them while they are soft.  You can see on mine that the ties did warp a bit, but to me, that looks prototypical for a yard switch anyway.  The final soldered connections are visible in the photo above with the tube of Goo above the turnout.

The bright-white styrene strips between the points will disappear if painted rail brown, and actually do a plausible job of approximating some styles of prototype throw bar.  In my case, I think they even look better than the big, ugly round rivet in the turnouts as they were manufactured!  Here a modified curved turnout in Onondaga Yard has been laid in place, weathered, and linked to a Caboose Industries Inc. ground throw. 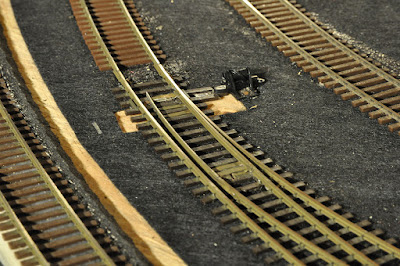 All for now.  Good luck, and my sincere best wishes to all through the Holidays and for a happy, healthy 2011!

A quick update to say that yes, I'm still alive, and all is well - the usual holiday activities are keeping me very busy and more thankful than ever for all things good in my life.

I am working on a big post regarding my turnout modification process and will have that up later this week.  Best wishes to all; thanks for your patience as we come to the start of the new year!