Hardshell, and a Visit!

Now that the cardboard web 'skeleton' for the hardshell scenery on the M&E was in place, I found a bit of time over the weekend to apply some plaster-infused gauze for the actual surface of the hardshell.  This was the first time I'd tried anything with hardshell scenery, and while the rumors of the general messy application process can be true, the results are worth it.  It is a very durable surface once cured, and it can be done with no filing or cutting down of foam, so it works very well for non-cliff surfaces.  Here's the area just north of Skaneateles Creek on the M&E, with fresh hardshell curing. 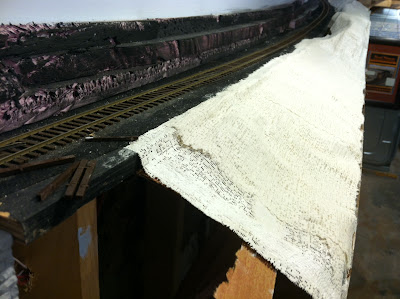 Next will come some scenery for this location, although much of that will be a trial and will be temporary, pending some additional painting on the backdrop and the final construction of the cliffs at Skaneateles Creek.

A separate, and more significant, note is that this weekend was the annual meeting of ProRail (http://njprorail.org/), an organization of layout owners and modelers that work to replicate prototypical operations on their model railroads.  This year's meeting happened to be in New Jersey.  Thanks to my friend Rich W., I was introduced to one of the members of ProRail several weeks ago, and he was able to attend a recent operating session on the Onondaga Cutoff.  He then invited me to visit during the ProRail operating session, which I did.  What a great experience!  His railroad ran very well, and it was a pleasure meeting so many serious modelers (and operators).  Most exciting for me, several of the guys took an interest in what they heard of my railroad, and about 15 gentlemen from ProRail made a quick stop that afternoon to see the Onondaga Cutoff!  It was an honor to give them a quick tour of the layout and the operation, and to run a few trains around the railroad for them.  I hope to be part of that organization some day and, as always, it was a pleasure to share the railroad with visitors!

Summer is around the corner, so layout time will decrease as it usually does this time of year, but these are exciting times for my layout.  All the time ahead that I am able to spend on it will yield significant results!

Signal construction has occupied most of my thought and effort over the last few months on the Onondaga Cutoff, as you can see from the last few months of posts here.  While most of the components are now on hand, we are waiting for delivery of more signals and of the local control panels - both key items that need to be on hand before we proceed.  And, signals will come before scenery, since working beneath the roadbed is easier before everything is hidden by scenery! 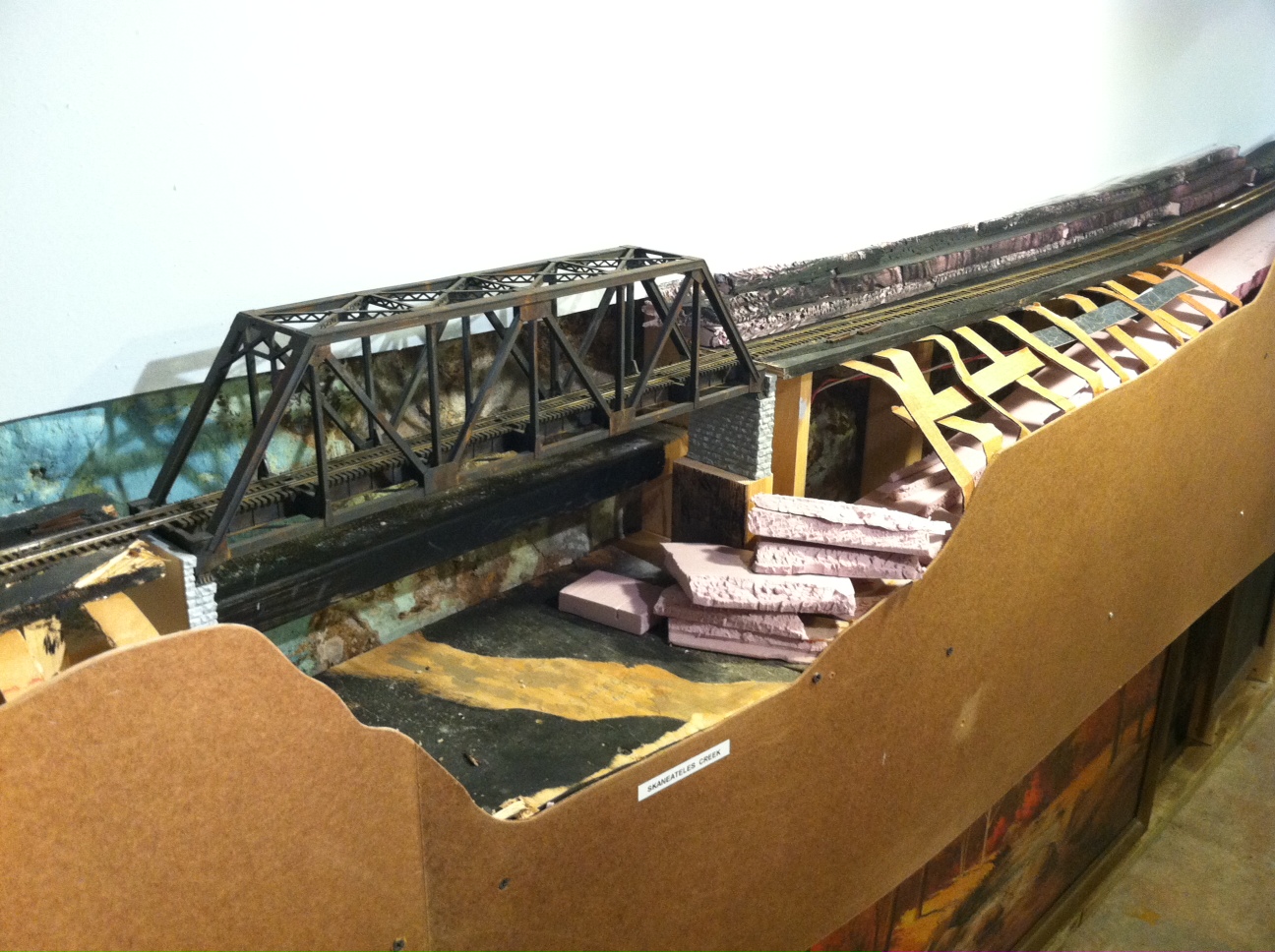 Here, we see the Skaneateles Creek bridge on the M&E, which has been in place for more than a year.  However, it was temporarily supported, so I began my scenery work by installing the abutments for the bridge.  Once those were in place, I cut cardboard strips into appropriate lengths and used hot glue to secure them on what will be a wooded hillside.  Foam will be cut to represent shale cliffs, and rock castings will also be installed to model a cliff alongside the creek, which will be the final step.

Maybe it's the springtime, but it sure is nice to be working towards some scenery at least at one spot on the Onondaga Cutoff!

Email ThisBlogThis!Share to TwitterShare to FacebookShare to Pinterest
Labels: Scenery

One of the real pleasures of building a model railroad for prototypical operation is sharing the layout with others during operating sessions.  The Onondaga Cutoff is built to represent traffic on Conrail's 'Chicago Line,' their double-track, former New York Central route through Central New York, and with that vision in mind, several guys have been a big help with some of the finer points of the progress on the layout and operation.

Much of that assistance has been mentioned here before, including Jack's invaluable help with route design and operations planning, Rich's help with paperwork and locomotive manipulations, and Nick's help with signal design and construction.   Those are all cornerstones of the model railroad.  For some of the details, Al T. has been quietly contributing since he has first been part of the crew.

In fact, so quiet have the contributions been that the operating crew now looks forward to seeing what might pop up next.  At one operating session, we suddenly found 'blue flags' for protection of standing equipment, used on the prototype to protect employees working on standing equipment. 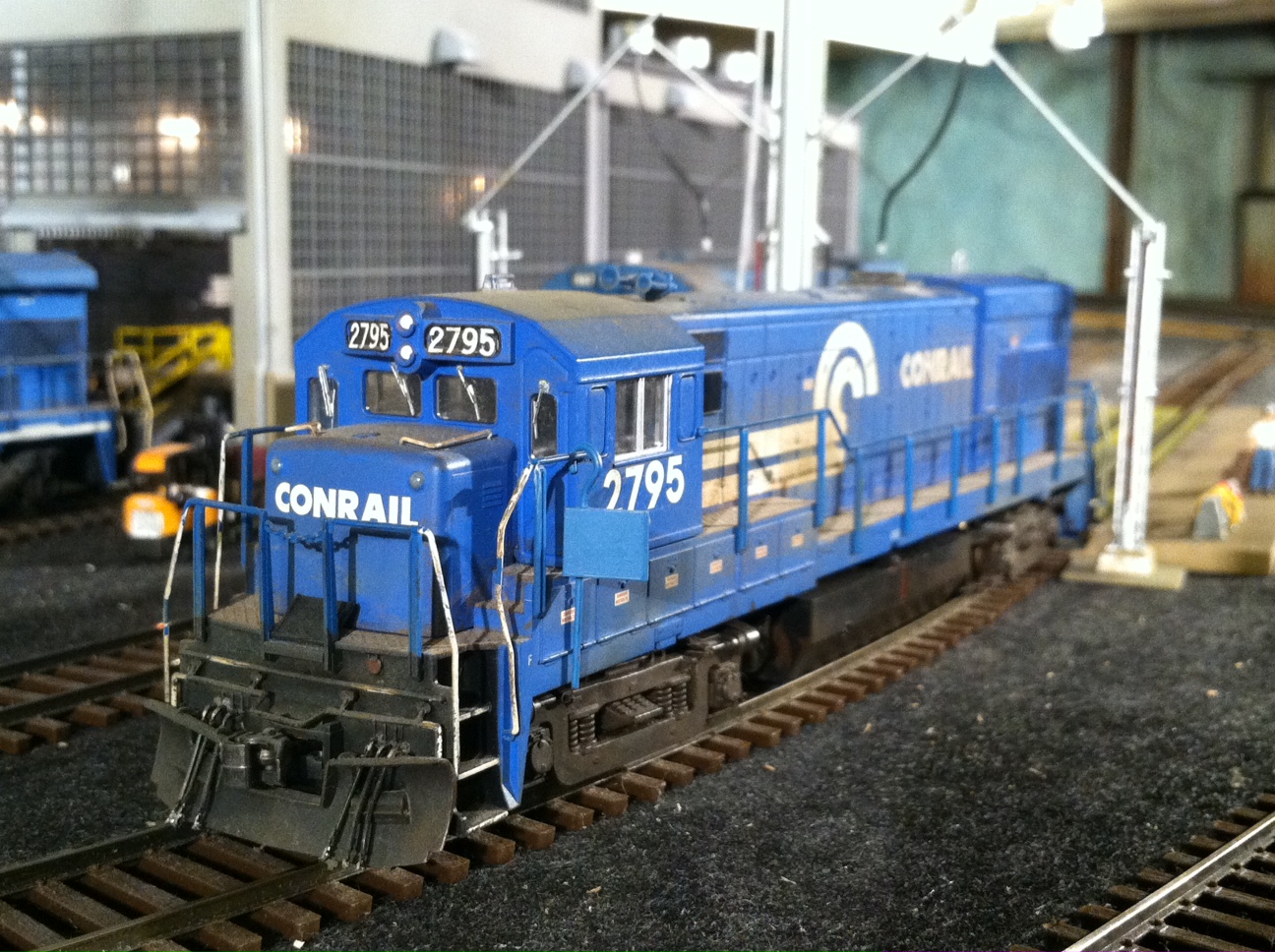 For locomotives in Onondaga Engine Terminal like U23B 2795 here, blue flags now protect mechanical department employees who may be servicing locomotives.  Before moving equipment with a blue flag, the engineer must use the radio to make sure crews are clear of the equipment.﻿ 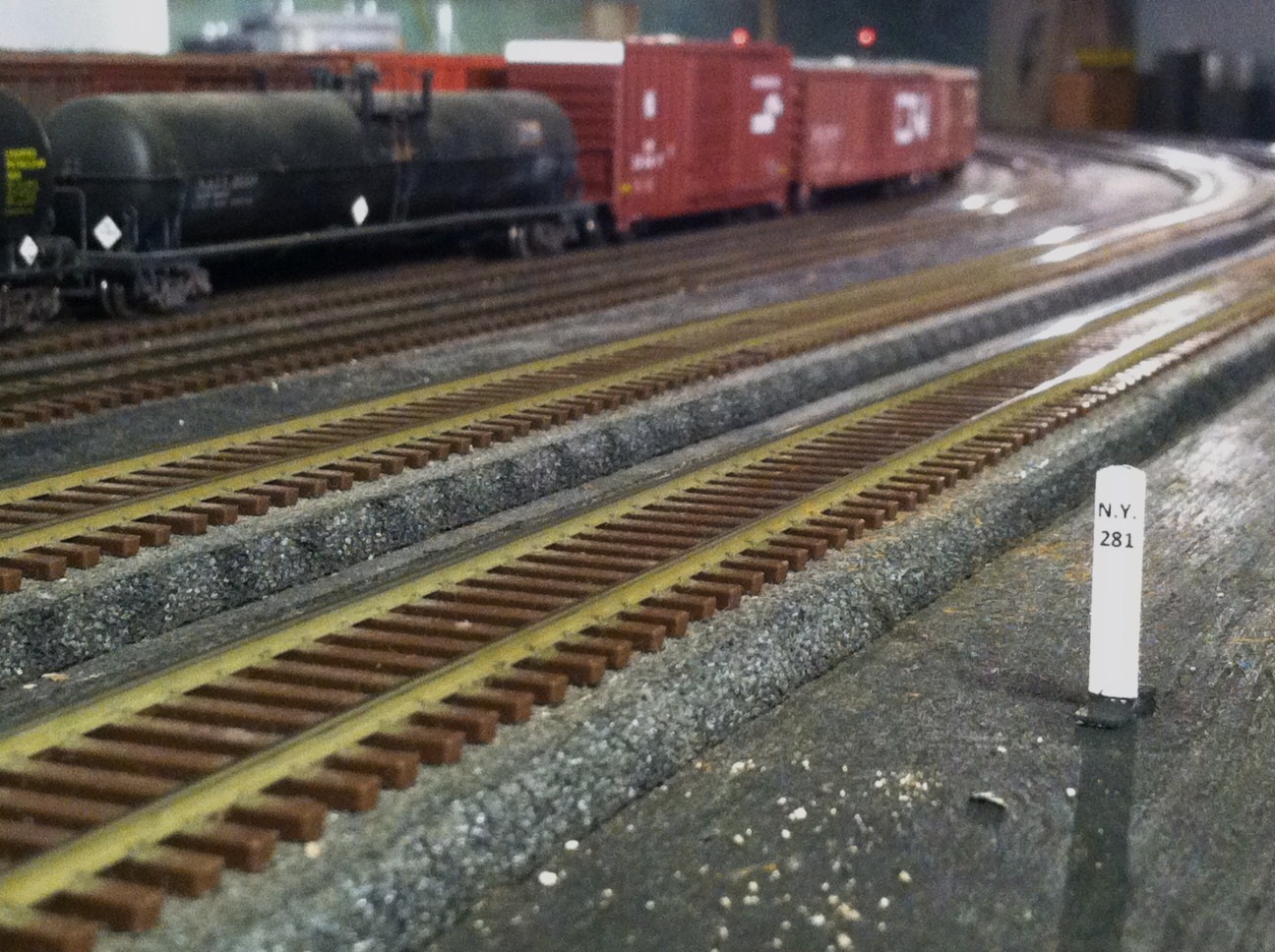 Another sudden arrival was a full set of the classic New York Central concrete milepost markers, ﻿nicely represented in HO scale and appropriately placed around the railroad at just the spots I would have placed them - but Al got to it first!  This sort of assistance really adds to the prototype feel of the layout, even before scenery is started.

At one session, out of the blue, a talking defect detector began to announce the safe passage of trains through Camillus, NY, over the radio - Al had put together a quick recording that sounded much like the Conrail voices sounded, and using his radio for one session, we had those sounds on the air.

Then, this past winter, Al was operating a train over the railroad and called the dispatcher to report some 'kids near the tracks.'  Turns out those kids were trying to light up the approach-lit signals with some copper cable to check if any trains were coming.  Jack and I can't imagine where Al got that idea.  Thankfully, there were no further issues. 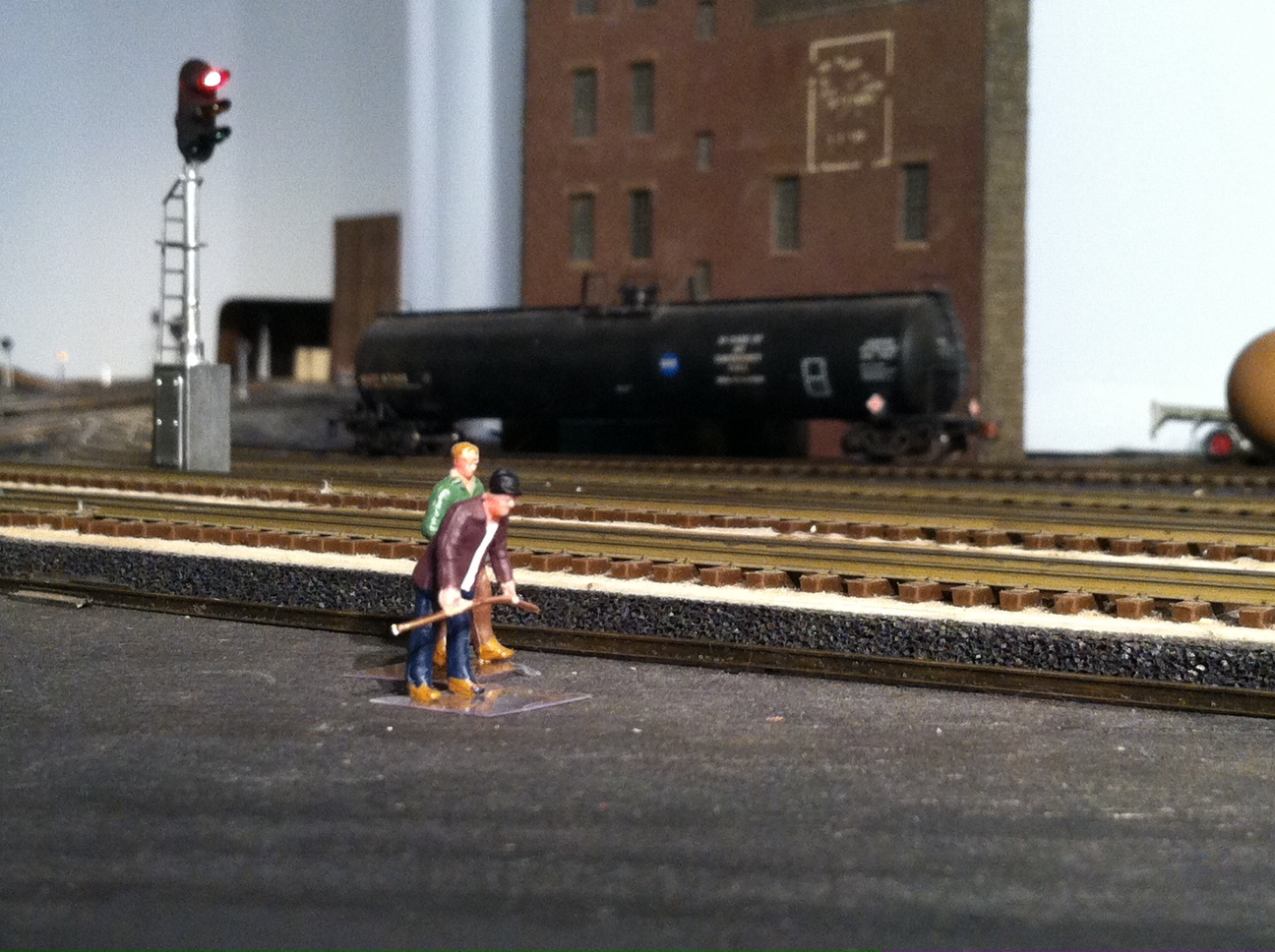 These sorts of details bring a layout to life, even one that has yet to see any significant scenery construction.  Model railroading is a social hobby, and the Onondaga Cutoff is better for it!