Time and a Sense of Place: Passing of the Torch

Moments come along in life that remind us of the journey we are on.  Some of those moments are full of bright memories, and others are in the shadows of darkness.  Regret, frustration, a sense of missed opportunity: these are real, honest feelings, and deserving of our time.  Darkness is part of life, after all.  However, the bright outshines the dark.  The bright spots are the most poignant of these moments and are nearly tangible in their nostalgia and in the good energy that we carry along in life.

On Sunday, June 8 2021, one of the influencers of the Onondaga Cutoff passed away.  At first glace, the life of Barbara 'Babby' Siegelman would have little to do with a model railroad.  She loved gardening, family, horses, and her community.  Giving and thoughtful, she had more friends than days in the year and was a wonderful person to speak with.  She spent her senior years raising her granddaughters on a horse farm built by her late husband and laughing late into the night on the phone with lifetime friends around the world.

And, she inadvertently offered one of the most direct influences of my vision for my model railroad: the vast layout built by her late husband in the basement of her country home in Bedminster, NJ. 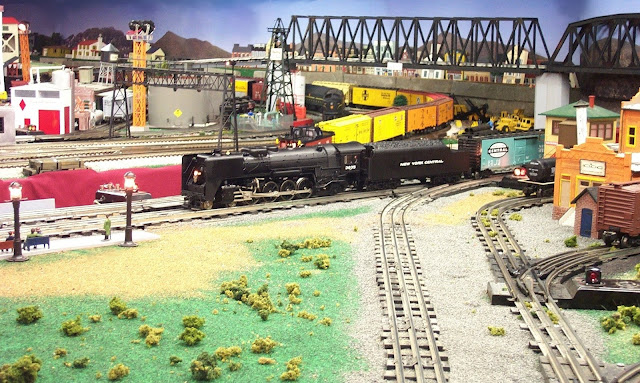 I literally stumbled into this one out of the blue.  The layout had been years in the making by 1995, but we wouldn't know Babby for years after that.  After my mother passed away in 1995, my dad poured time into his work as a teacher and into each of his three kids: me, my sister and my brother.  He saw each of us off to college as a widower, a show of strength I will remember for the rest of my time.  He'd regularly travel to Syracuse, Ithaca, and Millersville for sporting events in support of each of us, bringing friends along for the ride, creating community wherever he went.  He didn't date until about five years later, the summer of 2000.  A blind date was set up by his cousin, where he met Babby.  He called me on his flip-phone cell, after they had enjoyed supper and were walking the gardens at her home.  "Dee - you GOTTA come see this!  What are you doing right now?"  She had been talking of her late husband and how he wasn't the gardener - his hobby was in the basement.  Needless to say I didn't go down that night - never interrupt a first date! - but did shortly thereafter, and upon seeing the sprawling 3-rail O scale setup, I called Jack in the same manner Dad called me.  "DUDE - you GOTTA see this!" 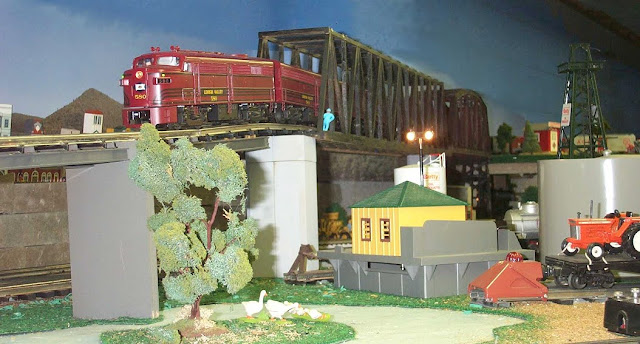 This was a huge 30' X 70' basement, and the layout was two tables: one about 20' X 30'with an operator's pit, and other about 20' X 10' that was controlled from the same pit.  Large loops allowed a few trains to move at once.  But it hadn't turned a wheel in the several years since Babby's husband passed.

At first we were a bit reticent about running the trains - after all, Babby's late husband had built it and we were guests - but after a few visits with Dad, Babby offered that I could call and we could come by ourselves.  Jack and I worked up a plan to make a few improvements and asked permission to do so.  Babby was thrilled, "I just love to see it running again, you boys are welcome anytime.  Give me a call and come down, and you can do as you please with it - it's wonderful to see it working again!" 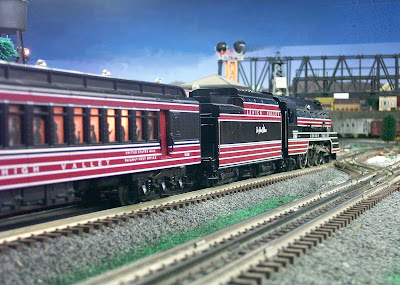 That was all the invite we needed.  Over the next few weeks we adopted the 'orphaned' layout.  We moved all of Jack's 3-rail stuff down there, and also boxes of all my HO stuff which at the time was in storage at my apartment in Westfield.  And from the fall of the year 2000 right through the start of the Onondaga Cutoff, Jack and I went to Babby's on hundreds of evenings, and put thousands of hours and dollars into the layout.  We were young, fully employed, and without many commitments, and the layout blossomed. 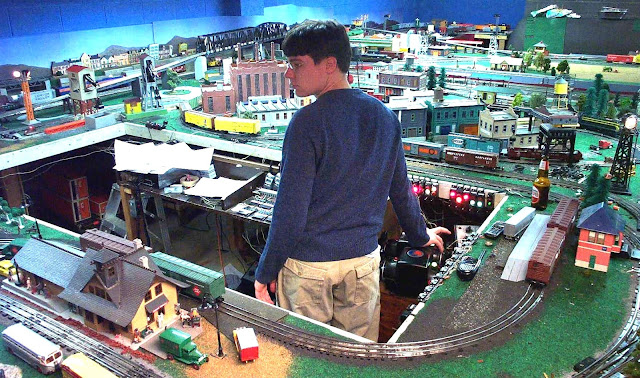 Jack came up with a name:  Claremont & Saucon Valley.  It represented generic northeastern territory allowing us to run different sets of power on different nights with the same operating plan. Jack developed a system of train symbols and a car-forwarding plan to fit the infrastructure. And we got to work. 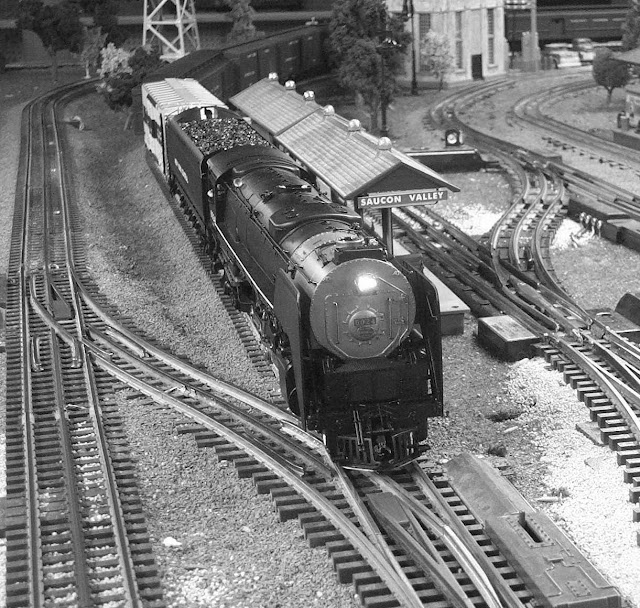 We rewired the whole thing to be run by three Lionel ZW transformers. We changed the routes, smoothed joints, added interlockings, added sidings.  I painted the walls, added backdrops, and added another interchange track to the two that were there already.  Jack slowly but steadily came up with a whole new design for the tracks and switches in the middle of the larger layout, and we separated wiring for the smaller layout where I would now be the operator. 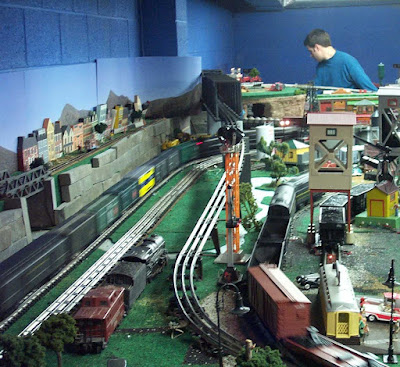 We developed a system to operate it by 'running time' instead of laps or distance.  This kept trains moving while we switched, classified or worked other trains.  Quickly the size disparity made operations tough, so with Babby's permission we reorganized the basement and added an extension to create an 80-car, stub-end classification yard. 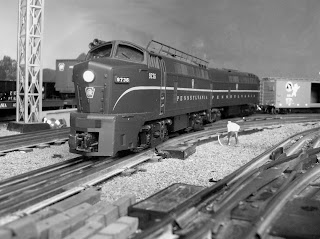 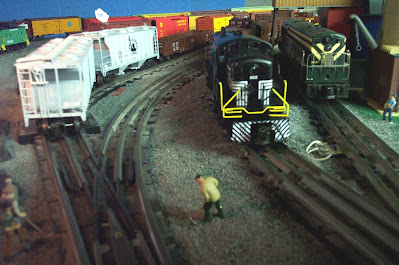 It was 3-rail, yes - but with mostly scale equipment thanks to Jack, and I began to contribute too.  After all, I had no home layout at the time, and this was the bird in hand.  Jack and I would bring beers and a pizza to the layout, eat it down, and get to work.  We installed large amounts of new Atlas O track and switches for reliability and appearance. The operation grew.  Big-time, main line action, with yard and switching to support it. 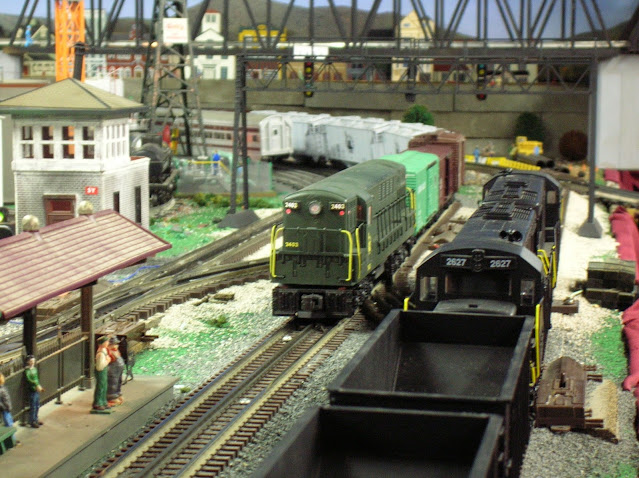 Babby began to have parties when we would operate so that others could come see the layout in action.  By 2003 friends started to bring their kids, and relatives made time to see it work.  We hung red curtains made from old tablecloths as layout skirting, and added scenery to improve the appearance. 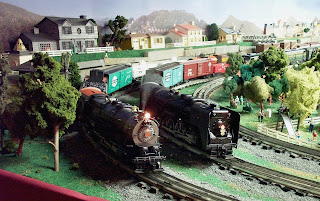 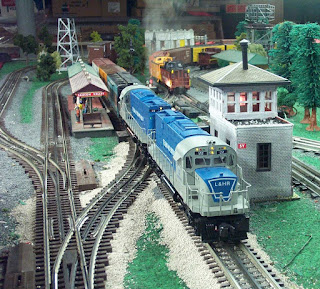 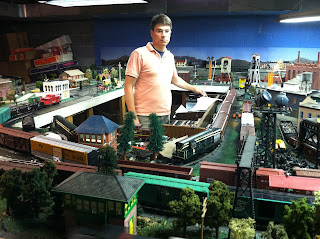 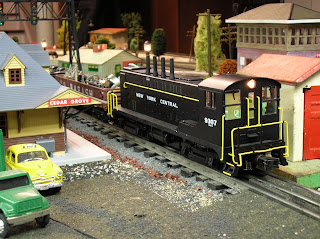 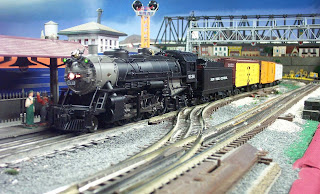 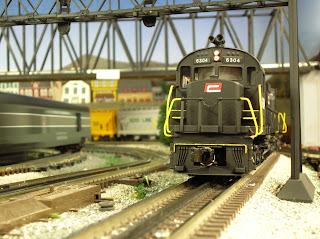 We turned the lights off and had 'nighttime' sessions too. 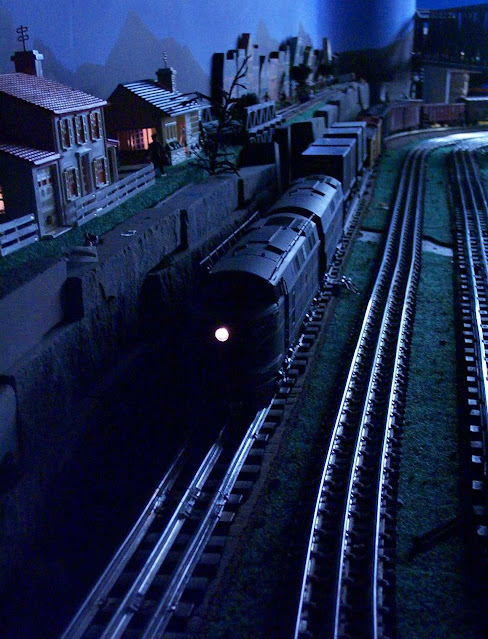 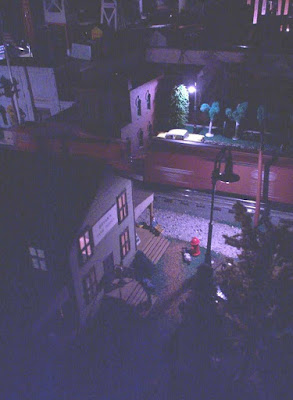 We continued with the layout through ups and downs in life. Jack traveled to Europe, and I traveled the American west with Heath. The night after 9/11, I was in the basement at Babby's painting the wall blue, full of sorrow and despair in the state of the world.  A few nights after my sister died in 2003, dad was with his cousin, Ben with his friends, and so I was in the basement at Babby's drinking beers with Jack.  A day after each of us graduated with master's degrees, we were down at Babby's. As the decade passed we discussed our families, hopes and fears in that basement.  Babby was a confidant as we searched our lives for women to fall in love with, a friend and a wise mentor.  We'd visit with her for a while during our visits and share the goings on.
The camaraderie grew to include regular attendees.  Scottie S. and Rick S. were both present quite a few times, sharing laughs, trains, and beers, and the fun continued. 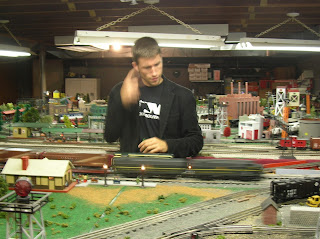 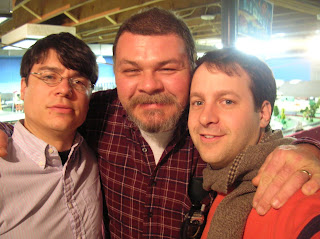 Most of all, it was FUN.  Trains moved and we had FUN.  And so many of the lessons we learned at Babby's are part of the foundational fabric of the Onondaga Cutoff:  camaraderie, fun, multiple-track mainline action, interchange, a car-forwarding plan, night operations, open houses, regular sessions for both readying the layout for running and for operations themselves.  The Onondaga Cutoff has roots in the energy of the Claremont & Saucon Valley.
And when Jack and I each got married, each of our wives met Babby and enjoyed the camaraderie, too.  Even as each family began to have children, we still made time for the layout and to keep Babby appraised of the journey.  And time goes on.  Shadows pass: Babby was in a terrible car accident around 2010, and was ill for months after.  We checked in, but visitors were restricted.  Once she felt better we returned, and the layout was off and running again.  By this time the vision that was so tangible to me was starting to be realized in the Onondaga Cutoff, construction of which began in 2008 and operations in 2011.  We split time between layouts but more children arrived in each family and time began to shrink.  We stayed in touch with occasional visits and calls, but time goes quickly, and for the first few months of 2021 I could tell things were different.  Reading of the news of her death was a breathtaking pause, a twinge in my mind and body in realizing in a moment the weight of the loss.
And so, Godspeed Babby.  Thank you, for everything.
Posted by RGDave at 5:40 PM 6 comments:

As regular readers know, we have a fully automated grade crossing on the Onondaga Cutoff.  Just west of CP 277, Highbridge Road crosses the Chicago Line, and the grade crossing is protected by lights and gates mounted on posts.  These are automated through the use of sensors placed along the track - distant sensors, located so as to provide gates being down before a maximum-speed train's arrival, and 'island' sensors on each side of the crossing so that the gates rise immediately after a train passes.

I used the Azatrax system for this as detailed in the March 8, 2019 post https://onondagacutoff.blogspot.com/2019/03/protecting-grade-crossing.html and have found it to be excellent.

However, it was designed for a simple double track main line application - not one with a crossover between the distant sensors and the crossing.  Essentially, where the diagram above reads 'Track 1" there are switches that allow trains to cross over in each direction.  Therefore, depending on the sequence of traffic, the machine would be deceived by certain crossover moves, since the incorrect sensor would be triggered or missed, and that lead to unprototypical operations.

After one of the Facebook Live video releases on the OC Facebook Page ( https://www.facebook.com/onondagacutoff/ ) a viewer commented that he could help with this.  Matt Paquette, who is a professional signal maintainer for a major northeastern freight railroad, advised that we could use the internal contacts in the Tortoise Machine to re-wire the distant 'E' and 'W' detectors to provide proper detection for crossover moves.   Matt built a new diagram to follow. 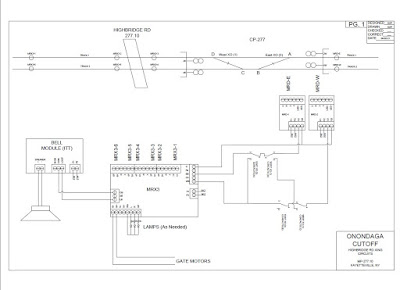 Essentially, the Q1 output needed to be routed through the internal contacts in the Tortoise machines so that the grade crossing board would see the proper distant detection for the move.  It took some doing and soldering in tight clearances - not my best work - but it's functional, and seems to test out.  The true test will be an operating session!

So, thanks to Matt, the Onondaga Cutoff just got more prototypical.   Matt's expertise helped where I had run out of choices, and this becomes another example of 'Let Experts Be Experts.'