What a Difference Headlights Make!

A few photos of a nice meet that happened last night on the Onondaga Cutoff... 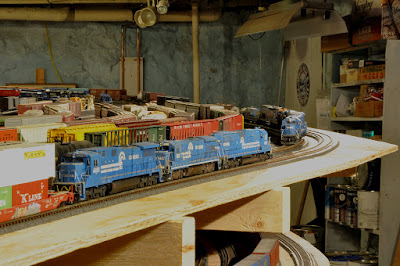 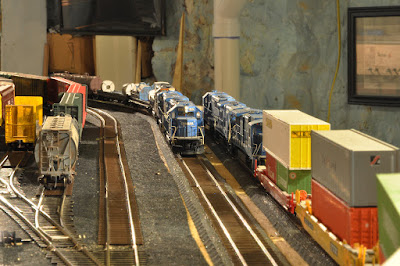 The command control really makes stuff like this fun.  With my ProCab controller, I can toggle back and forth between both of these lashups and a yard switcher at the push of one button.  FUN.

The snow was falling heavily outside, but the railroad action inside never slowed down!

As planned, I went ahead and installed two new power districts over the course of the week - both of them were installed on the visible main line.  Since the visible part of the layout is at the top of the grade, it requires the most current to keep trains operating.  Locomotives draw more and more current as the entire consist hits the grade.  Upon reach the summit at each end of the upper level, though, the locomotives must continue on level track while pulling the train up the grade, and so still draw quite a bit of current.

Installing two new power districts, each with its own EB-1 breaker set to 5 amps, I seem to have eliminated current-draw power interruptions.  With two heavy trains at mostly open throttles, 3 Athearn units each, working up 2% grades with 35-40 cars, I had no issues - a nice relief, given the prospective cost of adding another booster to the system.

Soon, I will be installing headlights in my older Athearn units for the first time, and will also work to finalize the design of the engine yard.  Winter is a great time for model railroading!

Building a railroad like this in my home means that much of what I am doing, I am learning by myself for the first time.   Therefore, a good part of the fine points of construction, operation, and electronics are learned trial-by-error...figuring out problems when the happen, and hoping I don't destroy electrical components!

So far, I did toast a decoder (due to a steel tool fouling the track, which tripped the breaker, but due to the length of time that passed before I realized it, the decoder shorted out anyway).  I have also had to learn the hard way with my breaker settings and power district design.

My NCE EB-1 breakers were installed as per the directions that come with the units.  While the booster itself has an internal breaker, I wanted to add a layer of protection before causing that breaker to trip, to ensure that the booster would last.  The additional layer includes the bank of EB-1 external breakers with a factory-set limit of 2.5 amps per breaker.  While fine for a small layout or for a large layout with no grades and small trains, this limit quickly began to get in the way of my operations.  Thankfully, NCE predicted this, and allows the user to adjust the trip limit of each breaker using jumpers provided with the kit.  I bumped mine up in steps, per the instructions, and stopped with each breaker set to 5 amps, since if I went higher the breaker in the 5-amp booster itself would trip before the EB-1.  All worked well with this idea until last night.

I was running two large trains, in different directions, when suddenly the breaker protecting the upper level tripped again.  The issue here is that this load is going to be standard for me:  two trains with more than 30 cars, 5 Athearn units total, moving upgrade on separate districts.   However, I noticed the breaker only tripped when both trains were pulling uphill AND then one crossed the insulated gaps onto the same power district as the other.  On separate breakers, 3 units and a big train is fine, even upgrade.

This leaves one solution:  time for another power district.

Fortunately, I purchased a total of six EB-1 breakers, one of which is reserved for the short line.  Therefore I have two remaining breakers.  My plan now is to add another insulated gap just east of CP280, and a new power district, allowing trains in different directions to pull over the top of the grade on DIFFERENT breakers, instead of the same breaker.  It is my belief that this will solve the issues of overdraw on the district.  But...time will tell.

Finally, the entire railroad that is currently in place is fully under the Digital Command Control system.  For those that haven't heard about it, Command Control differs from regular model train control by applying a constant voltage through the track, and using digital commands to communicate with locomotives or other powered appliances on the layout by way of a digital decoder that is installed for each locomotive or appliance.  I am a late-comer to this technology, which has been around in various forms for more than 20 years.

I purchased the North Coast Engineering (NCE) Power Pro 5-amp DCC system, with an add-on booster unit, and with the radio-control option.   This allows me to carry around the 'cab' without having to plug in any additional wires or cables while I operate.  On a big, walk-around layout, this is a huge advantage, and makes things much more fun even at this stage - when I have just one locomotive wired for DCC with the decoder.

The first 'operation' on the DCC railroad was a simple local working Onondaga Yard - the symbols for this will be WAON-3 (the symbol that works east of the yard, down to the online industries) and WAON-10, which will be the yard job and work the propane distributor in the yard as well as any duties around the yard.  So, therefore, my first train was WAON-10, with Conrail 3305 doing the honors: 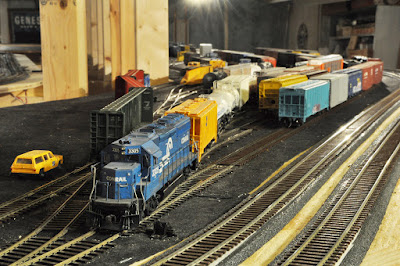 This location is a solid 20 feet from the command control units themselves, and so would have required plenty of wiring on top of all that I have done already to install plug-in locations necessary to operate this with a tethered cab.  Instead, I stood with cab in hand, and was free to walk around as needed.  FUN.

Some significant work was required to realign my bus wires, the heavy-gage cables that run below the tracks, for DCC.  All my power bus cables are routed into terminal strips that represent power districts, and each of those then is fed through a special breaker unit that NCE manufactures, and then to the command station itself, via another terminal strip.  It sounds complicated but it is well explained in the manual and when you stop and think about it, it is very linear and makes logical sense too. 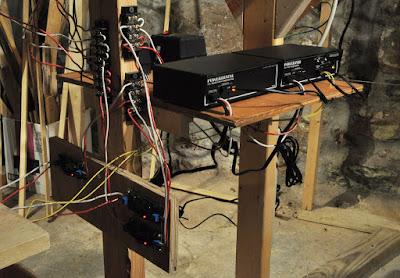 Here is a shot showing the NCE system itself - the command station (right) and the booster unit (left).  NCE's system actually has a booster contained in the command station, so I have two boosters, which is what is needed to run a layout of this size. 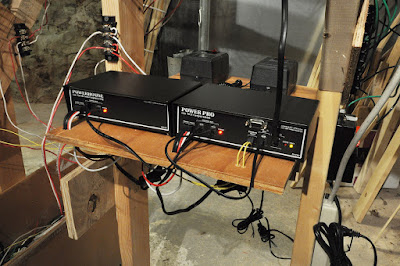 Regulating the current into the booster units are a series of 3 breakers, which can be expanded for the short line (that will be a 4th breaker) and even more if needed to run the mains.  Each has a red LED which is constantly lit when all is well.  When the breaker senses a short, from a derailment or otherwise, it opens, protecting the command stations and also the decoders in the locomotives from shorting out or burning up.  My panel is below, with both mainline breakers (one of these includes staging) and the yard/engine facility breaker: 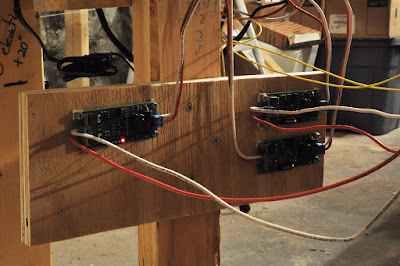 Once I install decoders in my locomotives, or need to reconfigure them or program a new locomotive, I use a 'program track' which is separate from the layout itself.  This track does not get enough power to run a locomotive, just enough to test a decoder installation and program the address and lighting, momentum, starting voltage, etc etc into each decoder.  It worked perfectly for me, according to the directions, on the first try. 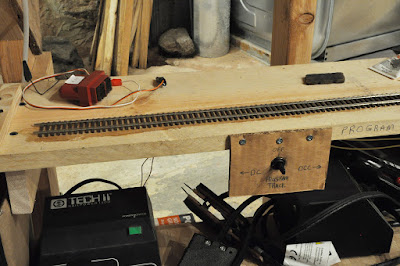 I also hooked up my old analog DC (regular cab control, not digital) transfomer to this track, via a double-pole, double-throw switch.  I can use this to test the first wiring of a decoder on low voltage, separate from the DCC system, to at least make sure there are no shorts immediately.

Now, it's time to wire up more locomotives, including installing headlights where appropriate.   It feels like a weight has been lifted off my shoulders - this has been a long time coming!
Posted by RGDave at 11:00 AM 2 comments:

It's official - day one for actual DCC functionality on the Onondaga Cutoff was January 10, 2011.  I installed a decoder in just one unit over the weekend, my custom-painted and detailed model of Conrail GP40-2 #3305.  Last night I was able to get the new 'program track' installed and running.  The full DCC system was hooked up to only one of the power districts so far (more on that soon) so I could only use the 'new' engine on a portion of the railroad - but so far, so good.

What a relief.  The electronics work.  I didn't screw up the first installation of a decoder.  And, it's FUN.

MUCH more to come on this as the winter continues!
Posted by RGDave at 2:35 PM No comments: