The weather here in NJ is finally beginning to feel like summer, and there's lots going on - house renovations, family get-togethers, and trips here and there, all on the horizon.  But, I filled the spring with lots of progress on the Onondaga Cutoff, and this post should bring you up to speed.

First, I have brought another locomotive on-line, this time detailing, weathering, and adding DCC to SD45-2 #6666.  It joined the fleet last week.  These locomotives were purchased by Erie Lackawanna, a Conrail predecessor, and were therefore always fun to see in real life.  They spent most of the Conrail careers around Cresson, PA, as helpers and coal train power.  However, there was a period in the mid-90's when they were leased to Canadian National Railway for several months, and therefore I can plausibly say this one is spending time on the Chicago Line as part of the CR/CN pool power agreement on trains CNSE and SECN, to and from Selkirk Yard near Albany, NY. 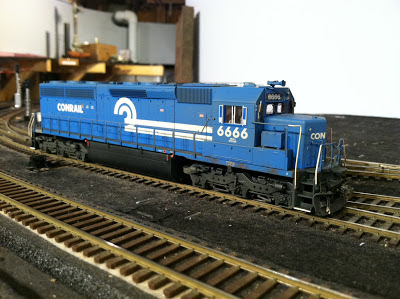 The mechanical department is also working to fill the roster with freight cars to serve industries on the railroad as part of a larger freight car forwarding plan that is currently under development.  Such a plan would organize car movements and help to manage yard capacity during operating sessions - stay tuned for more news on this as it comes to fruition.  Here we see a string of tank cars fresh from the work bench, ready for service. 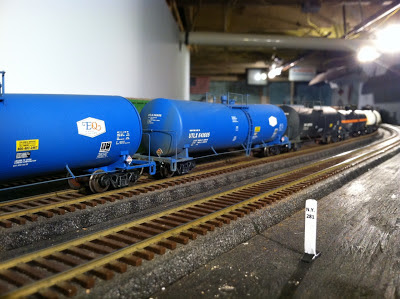 And, while working on locomotives and cars, the signal project continues as well. I spent an evening with Rick this week, using his drill press to create the holes that will be used to mount the push-button switches and the indicator lights in each Local Control Panel. 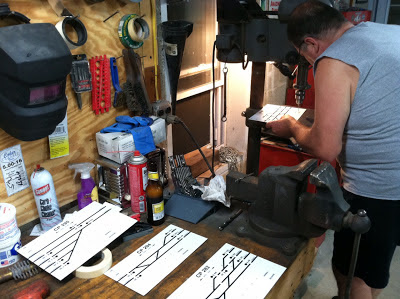 And, our little Susie is doing wonderfully - she is growing each day and is one of the happiest babies that I have met!  She's crawling, smiling, beginning to talk - every day is exciting with her and her mom is just the best mother I could have hoped for.  Good times.  :-) 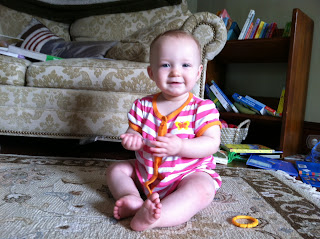 Summertime will certainly bring along many activities that do not include the Onondaga Cutoff, but I will fit in progress where I can - and bring you updates here as they happen.  Enjoy the season!

Email ThisBlogThis!Share to TwitterShare to FacebookShare to Pinterest
Labels: LCP

Tuesday of this week, thanks again to Nick and this time, Jack as well, we have another major step forward on the Onondaga Cutoff - the second of 6 interlockings is cut-in and fully computer controlled!  Tuesday, May 21, just before midnight, manual signals were removed from service and new, fully functional interlocking signals were placed in service at CP274, the easternmost interlocking on the railroad. 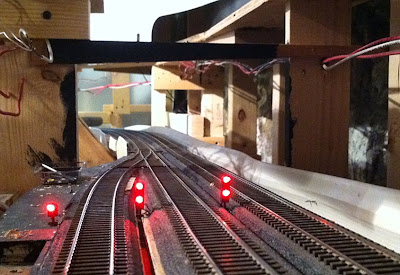 Here, we see the eastbound home signals for CP274, looking east with the Island East Lead coming in from the left, then Track 1, then Track 2 to the right.   The LEDs are nice and bright, and when seen in person, they appear considerably more red than these photos would suggest.  The brightness will be important, since as you can see, this is the lower level and will be covered by scenery above in the future.  Crews will be able to view their trains on the lower level from the side at this spot. 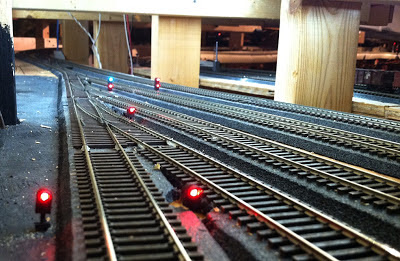 Next, we move to the westbound home signals for CP274, all of which are visible in this image looking west out of staging.  Tracks here are S5 in the immediate foreground to the left, then S4, S3, S2, and finally S1 all the way to the far right.

Single-head dwarfs guard the entrances to CP274 off S5, S4, and S3, due to the fact that the best aspect a crew can get out of staging is a slow clear (green) from these tracks.  Since all three of those tracks must pass through the #5 switch, which is a diverging move, that is the best aspect.

However, since on S2 and S1 trains do not necessarily need to diverge, a better signal aspect can be displayed, which requires another head on the dwarf signals.  Green over Green allows for a 'clear' aspect.  Seen here, S2 west is displaying green over flashing red, 'Medium Clear' for a westbound move from S2 to Track 1 west.

While we were able to get CP274 cut in in just one night, just like CP277, this belies the amount of work that was completed - CP274 is significantly larger than CP277, and so required much more work with both signals and switches.  While I worked to wire signals and Nick entered data into the CATS software and JMRI in the computer, Jack worked on the other side simultaneously, and wired switches to the SE8c.  This extra effort was absolutely essential to finish the work in one night. 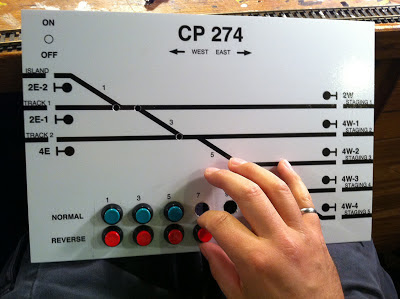 As you can see, another major step forward was to receive the final LCP's from the print shop - now that we are doing cut-ins for the real interlockings and signals, it is time to begin to install the LCPs to compliment that effort!  The only work remaining for me to do is to finish up the wiring in the local control panel (LCP) for CP274 as well as the first cut-in, CP277.  That said, Nick's design worked perfectly for the panels!  A blog post on this process is coming soon, but I wanted to show you what they look like - I'm very happy with how these are turning out.

Summer is slow to arrive this year in New Jersey, but progress on the Onondaga Cutoff is benefiting from that!

On the tail end of downtime while we wait for more signals to arrive, ﻿I decided to put a little ballast down and set up a handful of trees that have been sitting around for years under the layout on the recently-applied hardshell terrain on the M&E.  All of this is temporary, since I have more painting to do on the backdrop and more ground cover to apply as well.  But, what a difference it makes! 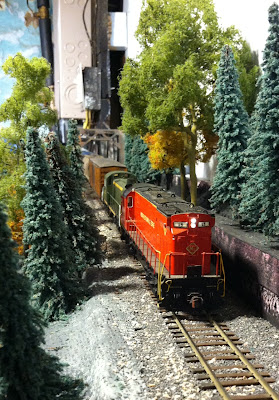 This is the area just north of Skaneateles Creek, and it really does look nice, especially when viewed along the tracks like this.  Nice to have one spot with some scenery in place.  It offers an immediate taste of just how much more fun it will be to run trains during an operating session over a railroad with scenery!  Signals first, scenery follows.

This is the 100th post in this blog - I'm excited about that, and happy to be bringing you the next 100 as we continue to build the railroad.