Sometimes, small steps can dramatically improve a scene.  A recent example is the scene of the bridge over Skaneateles Creek.  First, click on the link for a quick look at how it looked before - and, for comparison, here's a shot showing how it looks today: 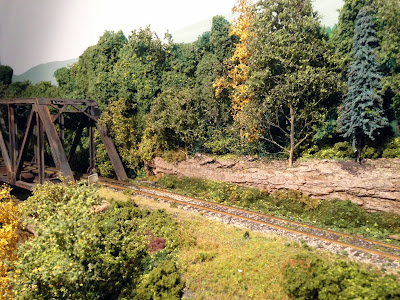 The technique used here was simply to apply 'puff ball' trees directly to the backdrop.  While the puff ball trees have much less intricate detail than the 'Super Tree' kits, they work well as backdrop trees, mounted behind the foreground trees.  Instead of an obviously amateurish painted forest canopy, now viewers see real, three dimensional forest canopy, with a distant painted hill to appear miles away. 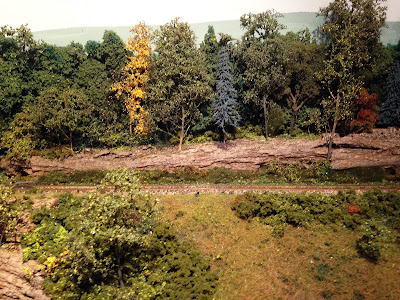 This is much more pleasing to the eye than the scene in the link above, right?  I'm pleased at how this came out, and will model all additional shallow scenes in the same way.  My eye is fooled by the backdrop and my focus goes to the railroad. 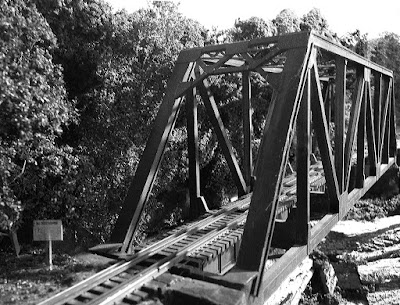 I had to play with some black & white imaging in Photoshop - I'm very happy how this looks now.

And, finally, for you locomotive fans, here's a shot of recently-finished C40-8W 6155 sitting at Onondaga Yard.  This is an Atlas model I purchased used.  I have added a DCC sound decoder and a few details, along with weathering, and now the 6155 can join the fleet.  I was never much of a fan of Quality-painted Dash-8 W's, but they do make a pleasing model of a 'plain Jane' unit that was a regular in the Syracuse area.

Email ThisBlogThis!Share to TwitterShare to FacebookShare to Pinterest
Labels: Scenery

Early in the morning of September 8, 1994, westbound train SEBU with four locomotives and 53 cars went into emergency as it passed upgrade through CP277 on the Onondaga Cutoff, just after 4 a.m. and still well before dawn.  The train notified the dispatcher and came to a stop, and the conductor then walked back to see what the issue was, only to find the following scene: 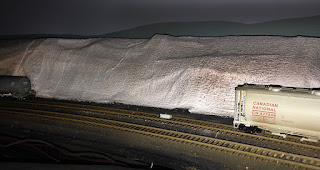 All cars were on the rail, but between the 5th and 6th car of the train, a mechanical defect caused some slack action to literally tear the coupler and its entire mounting from the frame of CN 377249, an empty covered hopper headed to Buffalo for interchange.  As the train was crossing over between tracks 1 and 2, this was a big mess, with both main tracks blocked.  Delays to priority intermodal trains started almost immediately. 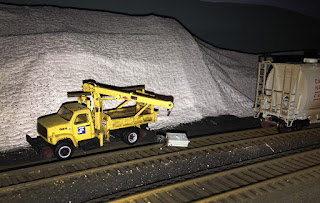 The train crew contacted the Mohawk Dispatcher, who in turn got in touch with the Trouble Desk, which immediately dispatched a mechanical crew with a boom truck to get out and clear the coupler from the railroad, as well as to assist the crew in getting the defective car set out.  With no coupler on the west end of the remaining train, locomotives from TV-5 were commandeered to push the back to the SEBU's train west up to Onondaga Yard, with the conductor protecting the head end.  The car was set out, and SEBU then started his scheduled work at Onondaga Yard, albeit with a conductor who wasn't too happy with how that run had gone!  Meanwhile TV-5's power reversed to go back to their train and continue their run west, now several hours late. 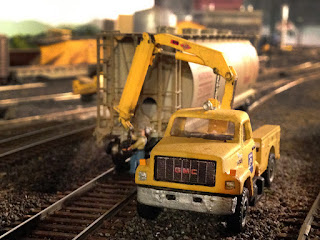 Once the regular Mechanical Department guys came on duty at 7, they fired up their block truck and used its knuckle boom to repair the defect on CN 377249 at Onondaga Yard.  The car will be added to an outbound freight later in the day.  No injuries, just a team of railroaders working together to get the job done right.

For me, stories like this one - an actual mechanical defect leading to a very realistic emergency situation, in turn requiring a realistic response to keep the railroad open - are part of what makes Operating Sessions such a great part of the hobby.  Having an HO scale railroad that can even generate prototypical problems is just a fantastic thrill - you never know what problems will pop up during a session on the Onondaga Cutoff, but rest assured the guys running will figure out how to deal with it!

It's a great hobby that allows us to be able to experience new things - in my case, after model railroading for more than 30 years, September 3, 2015 still will stand out:  We had our first operating session with fully remote dispatching.

Thanks to the internet and the capable networking skills of J. Alex Lang, as well as the signal design skills of Nick Anshant, the Onondaga Cutoff was remotely dispatched via CATS/JMRI software and radio from Jacksonville, FL for the first part of the session, and Pittsburgh, PA to close things out.  Crews talked into the radio, and by wiring a radio to the computer and Skype software, the remote DS could hear crews and talk back to the radio.  The DS lined switches and signals on their computers, and hardware moved on the OC.

More to come on this soon, but this was just too exciting not to mention immediately!