We have discussed the advantages of having a long-range view when designing and building a model railroad here before.  One aspect of that approach that tends to be rewarding is building a fleet of model locomotives that accurately depict what would be seen on the prototype.  In the case of the Onondaga Cutoff, a decent fleet of B23-7's is a requirement for service on yard and local freight trains, as well as on other assignments. 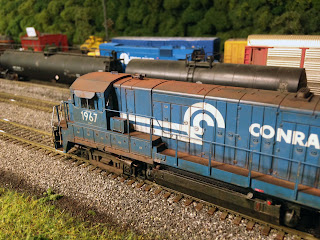 Here's a few images of the recently-finished Conrail 1967, a GE B23-7 delivered in 1977 to Conrail.  Seeing as though it was about 17 years old in 1994 and in original paint, this one was due for some weathering.  I added Conrail-specific details like the cab signal box on the walkway above, as well as a Sinclair radio antenna on top of the cab.  I then checked photos of the prototype online and was reminded that 1967, and many of its sister engines, developed a heavy coat of old rust on the roof surfaces. 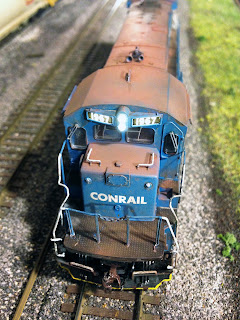 My 1967 came used and modified electrically from the stock model.  I found it on eBay, and knew it would be some work to get it set up.  It arrived with a charcoal-gray base wash already applied.  Thanks to the availability of weathering chalks, I was able to replicate that rust effect over the top of the wash, and developed layers of colors that really draw out the details.  (The yellow outline on the snow plow tells railroad personnel that this unit was modified to be clear for operation in 'Third Rail' territory close to New York City, where a third rail is mounted next to the track, allowing for passenger trains to draw electrical power for operation.) 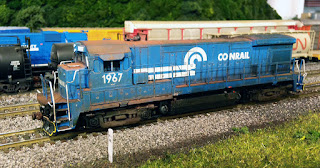 Having been built in Erie, PA, and largely maintained out of the big locomotive shops at Selkirk, NY, these units were regulars on the Chicago Line.  This is the third B23-7 to join the fleet on the Onondaga Cutoff, and there will be at least one more.  With these engines moving around, it's easier to believe that we are trackside on the Onondaga Cutoff in 1994!

Email ThisBlogThis!Share to TwitterShare to FacebookShare to Pinterest
Labels: Weathering

As we have discussed before, model railroading operations is a very community-oriented hobby.  It requires more than one person to pull it off realistically, and in most cases can require a group of people to come together to accomplish the goal of moving trains.

My buddy J. Alex Lang recently participated in an operating session as the Mohawk Dispatcher, and he did it from his home in Pittsburgh, PA - using the remote system described in September on this blog.  Afterwards, Alex did a nice write up of that experience on his blog, and I thought I'd share it with you all.

Posted by RGDave at 1:02 PM No comments: