In the late 1970's Conrail took delivery of a fleet of General Electric B23-7 locomotives. These dominated the Albany Division in yard and local service during the later 1980's and into the era set on the Onondaga Cutoff - the 1990's. By this time, the B23's were becoming a ratty bunch, and so Conrail started to rebuild and then repaint them at its massive Juniata Shops in Altoona, PA.

On the Onondaga Cutoff, I work to model locomotives at different stages of weathering, reflecting photos from the era. Here, Onondaga Yard on a warm fall evening in 1995 finds 1987 and 1989 working side by side, classifying cars for outbound blocks: 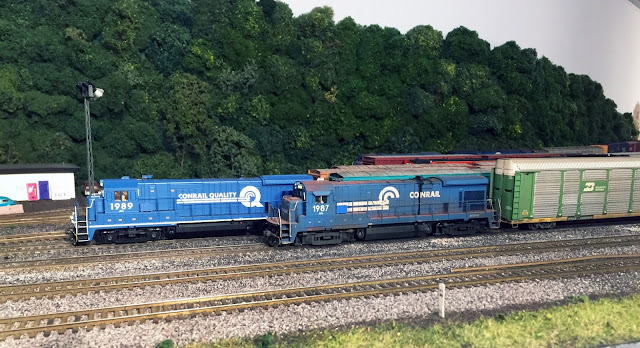 Below is a closer view of 1989, with the Conrail specific details like the cab signal box and Leslie RS-3L horn, deck-mounted ditch lights, and a lack of sunshades: 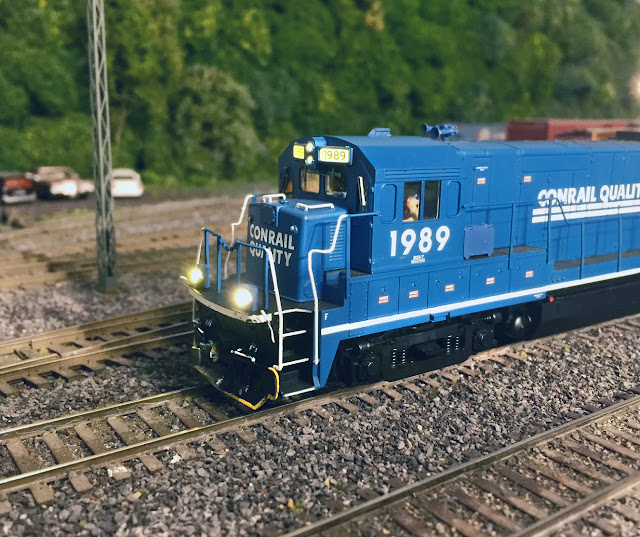 And finally an image to communicate some of the tiny work that goes into detailing an HO scale locomotive, showing the metal casting ditch lights that I drilled out using #70 drill bits to accept the LEDs and their wires. 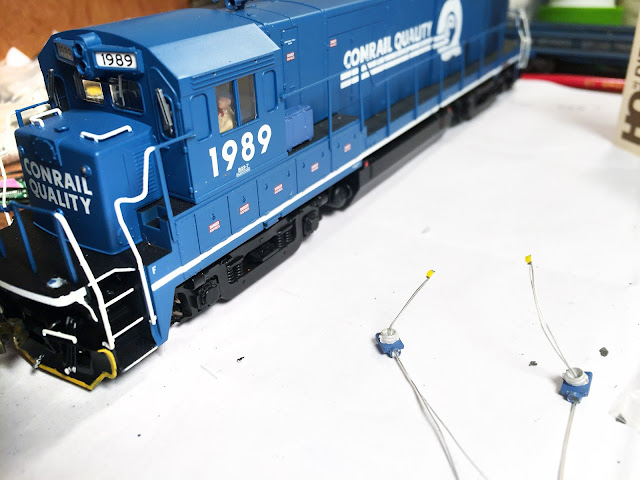 Conrail in the 1990's was a proud company that had come through a tough 15 years of demoralizing rationalization. But, part of that tough period was rebuilding the physical plant, and refurbishing a fleet of equipment - which developed a generation of railroad managers that defined the next 20 years of railroading in the Northeast.

And so it follows that some of the most ratty of the B23-7s were working next to freshly rebuilt B23-7's, and I have modeled that with Conrail 1987 wearing its 1979 paint, and with Conrail 1989 wearing its new ditch lights and 1995 paint. I enjoy weathering rolling stock and infrastructure, but when your era allows contrast, sometimes it provides as much interest as the weathering does.

Best wishes as the summer arrives!

Email ThisBlogThis!Share to TwitterShare to FacebookShare to Pinterest
Labels: B23-7, ditch light, Weathering

A critical part of prototype rail operations on any railroad is 'maintenance of way' (MOW) - the employees that work to keep the track, signals, bridges, buildings, and electrical services in a state of good repair.  Railroaders don't just run trains, or man the towers and dispatcher desk.  My whole railroad career has in fact been on the maintenance side of the railroad, so I am familiar with the equipment and people that do this critical work.

As operations on the Onondaga Cutoff have matured we have added some MOW activity, taking tracks out of service for maintenance.  This adds variety and challenge to the sessions as well as providing a job for one or two guys.  Here is a photo essay of recent track maintenance at an operation session. 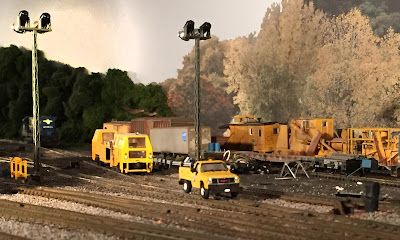 Early in the morning of Friday June 10, 1994, Track Supervisor Jacob is on his hi-rail pickup ahead of the ballast tamper, rolling east from Onondaga Yard into CP 280.   He has copied a 'Form D' - essentially a track warrant under the NORAC (Northeast Operating Rules Advisory Committee), authorizing him to be in charge of that track so that he can move the equipment to the work site. 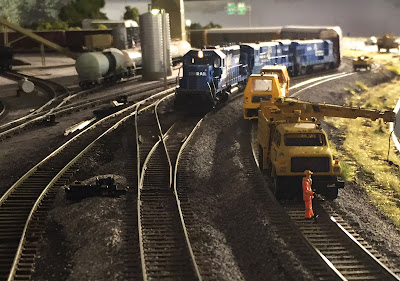 Once the equipment is moved to the work site, it is joined by a fleet of other vehicles adjacent to the track that work together to repair the track structure, in this case by replacing ties and tamping the ballast to level the rails.  While the work occurs on Track 2, Track 1 is busy handling trains in both directions.  Here ML-403 comes upgrade around a boom truck and the ballast tamper doing their thing. 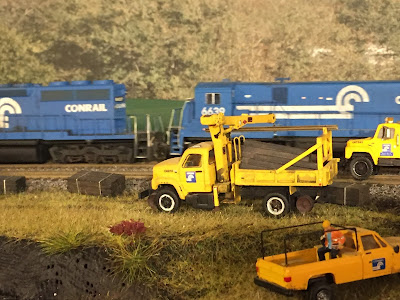 We turn to watch ML-403's locomotives blast past another boom truck laying out ties for spotting.

TV-13 works west later in the day behind three big GE's based out of Selkirk.  The engineer sounds the horn and rings the bell, following the rules, as he passes various maintenance vehicles and approaching CP 277. 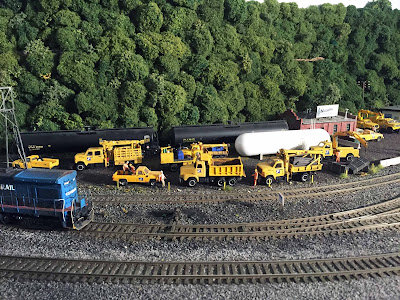 After the work is complete, by late afternoon, the track gang has cleared up.  They give the track back to the dispatcher for use with a speed restriction for the first few trains over the freshly tamped area, then remove the restriction once the track has settled under the weight of revenue trains.   The gang ties up all their equipment back at Onondaga Yard and heads for a well-earned few beers at a local tavern!

Modeling the maintenance of the railroad is something we can all do at operating sessions to add variety and give some credit to the railroaders that few enthusiasts pay much attention to.