Scenery along the main line of the Onondaga Cutoff near CP 277 has reached a point of completion where it is finally time to 'pour the water' into Snooks Pond.

Snooks Pond, a small lake in Fayetteville, NY is one of the spots of my family's lore from Central New York.  The Deans moved all over New York State in the 1940's and 1950's as my grandfather's job with General Electric in the radar and sonar divisions moved from Syracuse to Schenectady, then to Syracuse again; then to Ridgewood NJ, then back to Syracuse.  During the Syracuse stays, the family lived in Fayetteville for a time in the 1940's, Ridgewood around 1952, and then settled in Skaneateles the second time in the mid 50's.  My mother tells the story of her younger brothers and the family dog building rafts for sailing on Snooks Pond during the early 1950's in Fayetteville, which were tested by the dog - and always sank.  The dog swam safety back to shore.  Snooks Pond would be a winter ice skating rink and fun park for the family - all in all, lots of nostalgia there.

When I laid out the route for the Onondaga Cutoff, following the geology and elevations through Rams Gulch along I-481, I noticed the alignment took us quite near Snooks Pond - and I smiled. 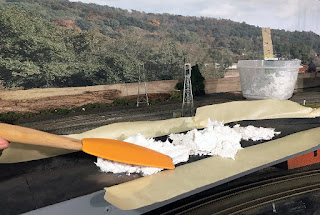 I began by defining the area of the lake, and filling the terrain in to suit.  I masked off the areas I wanted to keep clean and mixed a batch of sculptamold to create the landmass. 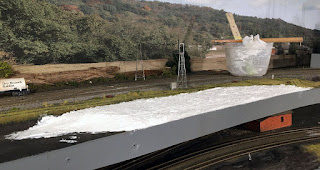 All contoured now and curing. 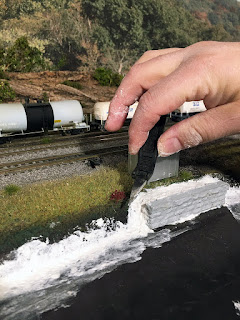 The area where the bungalow is for CP 277 has always struck me as awkward, with a narrow shelf for the bungalow.  This would have been a tower location on the original line, so I decided to add a retaining wall in the pond that would suggest a foundation for a former tower.  I filled in the back with sculptamold and shaped it to fit the look of eroded backfill. 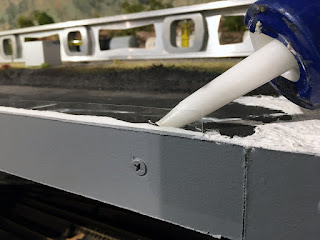 As that cured, I cut clear plastic 'dams' for the area that will receive the pour of the two-part 'Enviro-Tex' epoxy that will be the base coat of the pond.  (I plan to add ripples to the surface later with a different product.)  The dam is sealed with caulk. 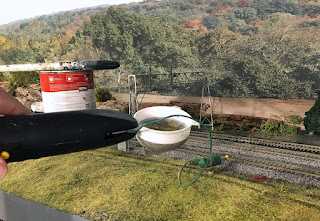 After the plaster cures, I painted it grimy brown-black and added static grass. 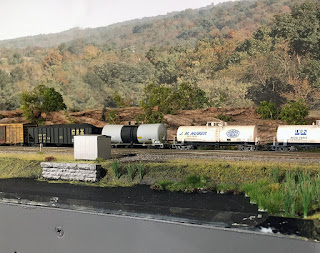 The final touches are a variety of plants around the edge of the pond, including swamp grass, cattails, bushes, and wild shrubs, from all sorts of sets I have collected from Scenic Express, MRC, and Noch.

Now I will finish up those installations, paint the base and pour the water (GULP) - another permanent move that would be costly if I screw it up!

Thoughts on a New Decade

Welcome to a new decade - 2020 offers hope and a promise of tomorrow, as all new years do.  I am optimistic for this year and decade to come!  Still, though, sometimes a date alone is worth taking time to reflect.

I'll include few images of the recent operating session which upon processing and viewing have helped me think and ponder over the 'here &  now.' 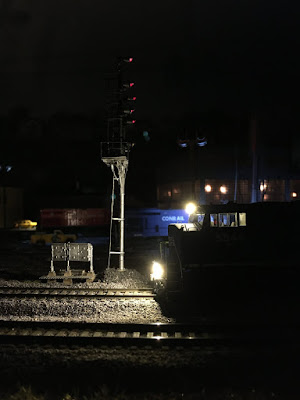 2019 was a year with new highs, balanced with several difficult lows.  I am realizing as time passes that some times of each year tend to be more prone to major shifts in energy, both on the layout but also in the larger context of life.  January has become such a time.  Early in life I'd be excited for snowstorms, for a cozy house on winter nights, for the chance at time off school, time trackside or working on models, and in later years time home from college.  Those memories are poignant and true, and remain where I somehow expect to be in January, even while life is so different from those days, all more than 25 years ago now. 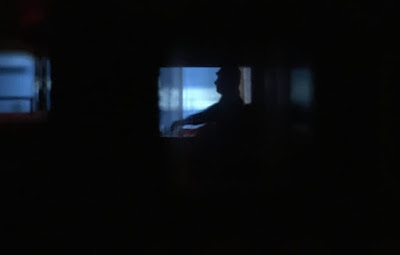 Today, firmly rooted in adult life, January carries more weight as well as expectation.  January now carries more awareness of darkness, and memory of things beyond my imagination 25 years ago.  My current sense remembers my father's death 4 years ago this month.  I'm more reminded of that this year than I expected.  These days in NJ there is less snow to be excited about, thought my excitement for a good storm remains.  I am aware of the weight of winter finances, family responsibility while recovering from holiday spending, making acute other financial considerations and that subsequent responsibility.  Work dominates the days and weeks before trailing off most nights and weekends, but to a higher degree than I'd hoped it still requires energy and interactions after hours.  Official volunteer activity similarly adds a layer of stress.  And it is my house that we work so hard to keep cozy, creating memories for my kids and my wife and I alike. 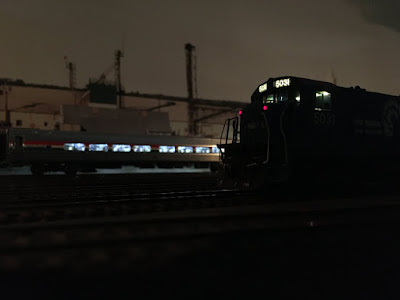 Mixed in with all that is this wonderful hobby which is truly in a golden age.  My family is healthy, which makes all other issues pale in comparison.  I have my health, a true blessing in a world of uncertainty.  And so I offer this as food for thought:  it is the Great Balance that is so perplexing.  I think there is a lot to be said for 'sitting' with the energy of our times, of the seasons and weeks and days, and reflecting on our being present with that energy, whatever it is.

Worth noting is that our first ever operating session on the Onondaga Cutoff was in October 2011, and it is hard to believe that makes 2020 the TENTH year of operations on the layout.  More to come on this as we approach this important milestone!

For me, and for many of us that model, I feel the hobby has a role in keeping us centered.  Ours is a real, tangible hobby, and one you can't really fake.  Either you create models or you don't.  You either read a few books or references or you didn't.  You attended operating sessions, or you didn't.  You have to have jumped in somehow to be part of the hobby.  That clarity of purpose is important for people and it's something I am thankful for.  The Onondaga Cutoff was built with the hope of satisfying operations, and keeping alive memories from a younger, more innocent life that I had when I was 10, 12, 16 years old, even 20 and 24 years old.  It has exceeded expectations on both.

I feel a great deal of gratitude this January.  Even though fighting a nasty cold and dealing with all there is to deal with, I am just so thankful for those that I join and that join me on this journey.  The amazing people in my world make this hobby and its operating sessions so worthwhile, and add to life in many ways beyond the hobby.  It is literally a hobby - and a life - of 'better together' and that is how I want to embrace it.

Here's to the new year, and decade!