Glimpses of the Operation

Once again we have a fun trackside glimpse of operations on the Onondaga Cutoff, thanks to regular operator Alexander B. whose style you will recognize from some other recent posts.  Using a small camera, we get to see trains passing from unique angles along the route.  This one focuses on the new grade crossing, which is impressive when your view is from about 6 scale feet above the pavement!

Thanks Alexander!  And for the rest of us, enjoy the show!

After some adjustments and tweaks, and a test run at a full operating session, I have made the final changes to the lighting setup on the new grade crossing at Highbridge Road.   With that working, I was able to make time to kitbash a bell for the setup, following suggestions from John at Azatrax and using the board to trigger the sound.

For posterity, I shot video of one of the first trains through the completed installation - TVLA, the most important westbound train on the schedule.  It's a good fit!  Turn your speakers on and have a look:


Like the prototype, the bell starts upon activation, and runs until the gates are closed (down).  Then the bell shuts off.  Some units trigger the bell again as the gates reopen, but others do not; I modeled the latter with bells only upon activation and closing.

What a hoot!  Thanks for watching!

After a push of late nights and dedicating a few larger blocks of time this month, the grade crossing at Highbridge Road is finally working, now protected with all lights and gates functioning as intended.  In all it was more than 30 hours of work time on the layout to get to this point - and the sounds have yet to be added!  That said I'd do it all again, because it adds so much to the scene. 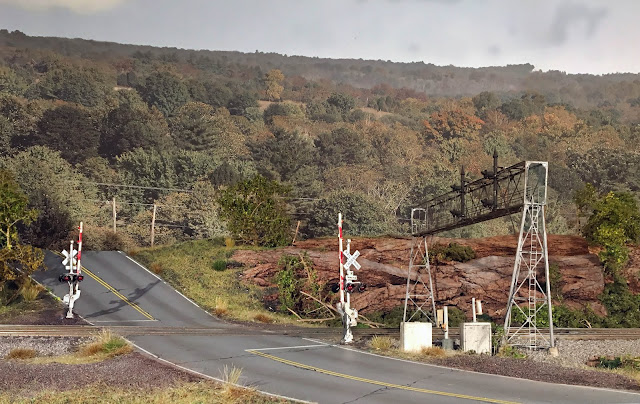 This installation used the Azatrax kit, which I selected from several choices.  It is available from their web site http://www.azatrax.com/controller.html - my application required the add-on pair of detection circuits due to the double-track.  It's a great kit with very good instructions and all parts needed, including the assembled NJ International crossing gates.

From a planning standpoint, it was tough to visualize the details of how I could mount the boards and locate the infrared detection LED's.  Further, this was my first foray into infrared detection, and so there was a learning curve with those.  Approach circuits for grade crossings need to be located according to the fastest trains, so that the gates are down before the train comes across the road.  So, mine are located about 7 feet from the pavement allowing even 79-mph Amtrak to pass safely.  Lots to consider ahead of, and during, construction.

Major projects are a balancing act, and projects that require the track to be out of service during construction are even more of a challenge.   This project was a mix of planning, track work, electrical work, and all of it had to be done within the 10" of height between levels of the layout.  Given existing wiring for block detection, signals, and track power, and it is a tight fit. 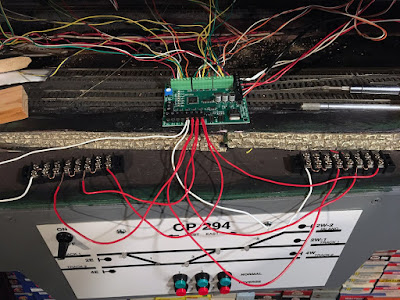 Even with planning, there is just no way to avoid the 'rat's nest' of wiring as you get started with this unless you're doing it below the bottom level of the layout and you can get away with short detection circuits.  With 8 infrared detection pairs installed, each two with LED-style units with two wires each, that is 32 wires for detection alone - before even touching the lights!

Different methods of detection exist. The Azatrax kit can use current-sensing block detectors, like my NCE BD20's - but only for the single-track installation.    For my set up the best choice was infrared, and using it as a 'reflective' setup allowed the sensors to be hidden in the roadbed. It is very important to include and wire only the sensors needed for your application - the instructions are key here.  The board is programmed for certain combinations of sensors for certain applications.  Here's how a final installation of reflecting infrared sensors appears from the top, looking down from about 7 feet: 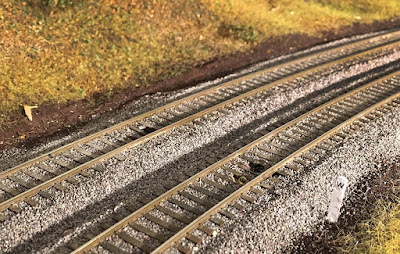 And, here is how it looks from a standing position next to the layout: 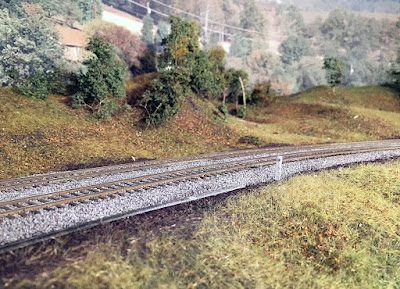 Having this level of the layout built at 58" from the floor is an advantage here.  The installation is basically invisible from the eyes of most operators.

Below, we can see more of how the sensors are aligned.  Here is a typical installation of the sensors, as seen from below the top level of the railroad: 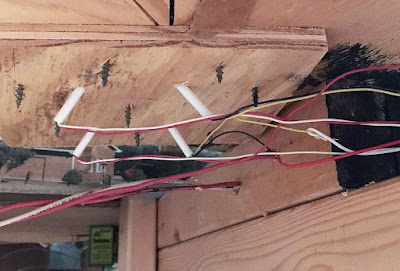 Each of the white angled tubes contains one of the infrared LEDs or receivers, set up in a 'reflecting' mode so infrared light generated by the LED bounces off equipment once it passes overhead, and is seen by the receiver.  These holes were drilled through the track and finished ballast - not for the faint of heart!  Sharp drill bits helped as did a steady hand.

I tested the installations one by one with different equipment, moving rolling stock by hand over the sensors.  In several cases, my first installation was not reliable as I had set the pair too far apart.  The reflection did not work.  So, I had to re-set several of these, but was able to fill the non-used holes with ballast which made them disappear.

The lighting was the most difficult part of the project.  The NJI crossing posts come with the primary LED lights wired, but no lights on the gates.  I elected to add three micro red LEDs to each gate, wired so that the last light is constant, but the two interior lights flash with the main LEDs.  The Azatrax board has terminals for each.  I drilled yet another hole for those wires (up to a total of 4 now, for each post) and ran them to terminal strips, which in turn were wired to the terminals on the board.  This was A LOT of work, all of it between the two levels of the layout in a tight spot.

And, then two of the LEDs ended up not working on the rear gate - the wires had evidently moved too much and the connection broke.  So, I had to wire up two additional gate LEDs on the layout.  In frustration I took a photo from my awkward location with the tiny wires.  Not fun. 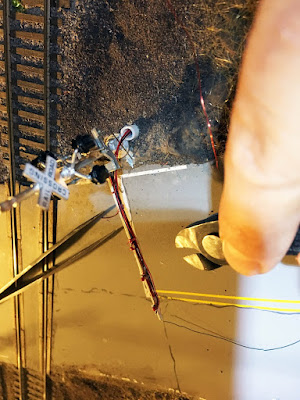 The final step was the gate motion.  The Azatrax board is wired to control Tortoise or similar switch machines and includes adjustments for speed control.  I drilled holes at a 30-degree angle per the instructions through the layout for the motion wire. The hard part is to locate the Tortoise below so as to reliably move the steel wire for the gates.  This took quite a bit of wrangling and adjustment, using all of my patience.  Again, though, it came together effectively.

Suddenly, then, I realized that I was finished - all that remained was to bundle the wires as best I could, and to clean up.

Next time I'll post a video for you all of the actual action.  It's worth waiting for!