Last week I was in touch with a fellow blogger who is also working to make progress on a large layout undertaking while married, working, and raising small kids.  It's a neat overview and much of what Greg has learned, I have learned in parallel!

Email ThisBlogThis!Share to TwitterShare to FacebookShare to Pinterest
Labels: Balance

A Sad, and Sudden, Change

Today I am the bearer of bad news - my father Peter W. Abeles passed away suddenly on January 12, 2016.  I am heartbroken and shocked - family comes first, even when that is difficult, and this will be a massive change in my world.

Dad was in seemingly good health, and was simply walking his & his wife's dog around the block near his home Tuesday 1/12 around 2 pm when he had an apparent massive heart attack.  Very sudden and shocking to us all.  We are in mourning but are working through that darkness so that we can more appreciate all the light and smiles he brought into our world.  He was quite a traveler over his life - my most recent trip with him was actually to Syracuse on a model railroad research & inspiration trip, on which we were able to spend some quality time with family, as well.  Such a privilege! 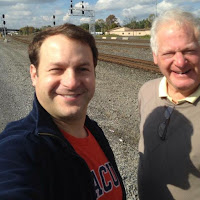 While not a model railroader, Dad loved watching people do what they loved to do.  He felt that human nature can be coached and guided for the common good, for the positive, when people build community and work to think of others needs before their own.  Therefore, he was a big supporter of the Onondaga Cutoff and the operating sessions we host.

He was a dedicated, committed father, husband, and friend, and will be dearly missed!

Over the past year or so, I have added some fascia to the layout, particularly in places where the basic land forms are in place up at the west end of Onondaga Yard and out along the M&E.  I chose 1/8" thick Masonite for the backdrop, the installation of which you can see in the Archives.

After a number of operating sessions with no major electrical issues in the track and signals, I decided it was time to put a coat of finishing paint on the parts of the layout that were closest to completion. 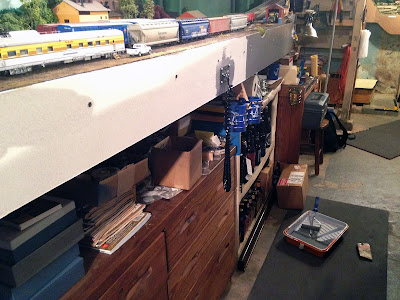 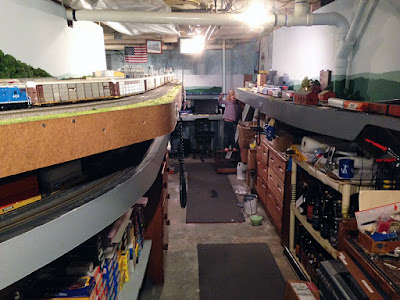 So, I selected a medium gray color, and the 'eggshell' finish which appears flat but can easily be wiped down as needed.  I loosened the screws on all the UTP-plug plates, Local Control Boards, and drink holders so that I could paint behind each of those items, and then got started - I used a 2-1/2" brush for cutting in around the details, and a little 6" mini-roller for the broad surfaces. 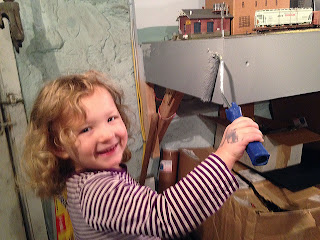 Susie came down to visit, and was very excited to see painting going on.  She asked to help and joined right in!  She's 3-1/2 today, which is hard to believe - looking back at this blog over that time is a neat exercise in time-lapse memory.  In some ways it feels like a few weeks ago, and in other ways, it is hard now to imagine life before children.  What a crazy, intense, and exciting experience! 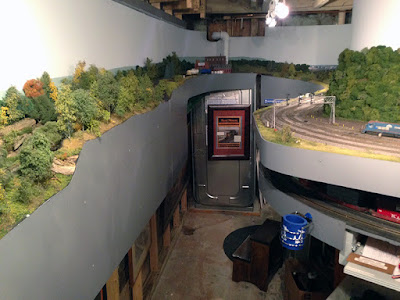 After a few hours, the results were more apparent, and I'll admit I didn't expect this big of a change in appearance.  I didn't mind the speckled brown of the Masonite but a coat of paint really makes the railroad 'pop' on first impression.  With a little bit of skirting hanging from the ceiling, and more of the same mounted below the fascia hanging down towards the floor, this view will be virtually complete.

Happy New Year!   Painting the fascia on the first part of the railroad was a big visual improvement and a great start for 2016!