A Little Progress is Still Progress

Summertime with a young family, and an extended community with many teachers, is a time of weekend trips, camping, and family activities.  Between that and working full time, summer months are not a high-volume production time for the Onondaga Cutoff.

However, there is still time to do a bit here and a bit there, and those bits add up.  Here's a late afternoon photo of recent scenery construction west of CP-280. 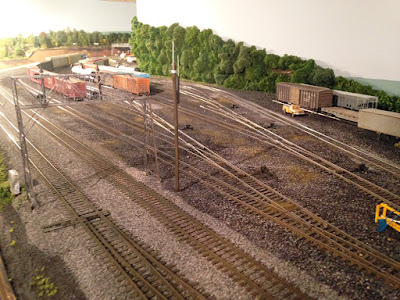 A few more trees have grown in on the hillside, and I am wrapping up the first layer of ballast for the east end of the major yard on the railroad, including leads into CP-280. Ballasting interlockings is a painstaking process, worked on a few ties at a time, all while working to get the colors and profiles correct despite avoiding stones and glue on moving parts of interlocked turnouts.  This is the first layer of ballast in the yard, with smaller crushed 'walking' stones yet to come as a finishing touch near the ladders and North Runner (the track running on the right side of the ladder tracks into the distance).

Enjoy the waning days of summer!

Email ThisBlogThis!Share to TwitterShare to FacebookShare to Pinterest
Labels: CP 280

Over the last few years, a pattern has developed that limits layout time during the summer.  With so many outdoor activities going on, and all sorts of family gatherings and weekend trips to organize, time for progress on the Onondaga Cutoff is limited.  Still, I aim each day to make some sort of effort to move things along, however small that may be. 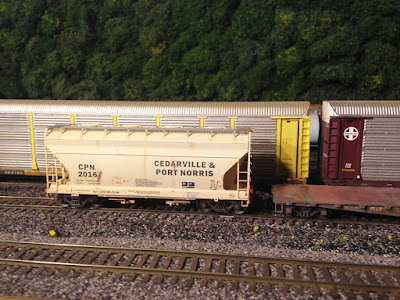 This car has a neat story:  At the last operating session, an operator donated a car from his freelanced shortline to my roster.  It's a great model that he lettered and weathered himself.  All I had to do was install the resistive wheelsets for block detection on my layout.  CPN 2016 will enter sand service on the Onondaga Cutoff.  And, while I was at it, I finally finished up the PC flatcar at right with heavy weathering as well as resistive wheesets.  The PC flat will enter the MOW fleet.  Both of these were relatively quick projects - a total of 1 hour spread over three nights - that help to keep progress moving on the layout.

A recent locomotive project was to model a Union Pacific SD40-2, to add to the fleet of run-through locomotives on the roster.  This engine came factory decorated from Intermountain as UP 3367, but in the as-delivered paint job from the 1970's.  Following great advice from Joe Atkinson, I removed the lettering and added decals to bring the engine to its appearance in the mid-90's.  Here it is, ready for weathering! 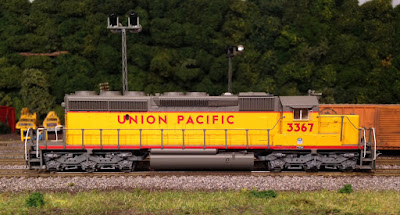 In addition to rolling stock, small windows of time are perfect for adding small details that help a layout stand out.  I finally got around to adding the joint bars to represent insulated joints at CP 282, beneath the big signal bridge there.  The joints, while subtle, really make the scene more complete, at least to my eye! 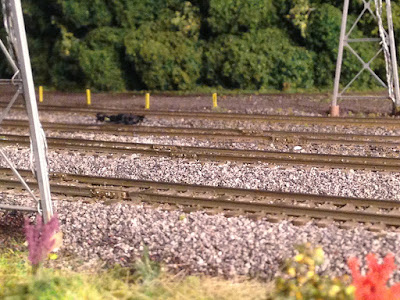 Much more challenging projects are on the horizon as we head into autumn in New Jersey.  With the help of my daughter Susie, I started to make more background trees to continue scenic progress behind Onondaga Yard, and will need several hundred more of those for scenery to continue on the M&E.  There are also a variety of locomotive projects at hand, including a relatively challenging kitbash to create GE C30-7A's in the Conrail livery.  Plenty of updates to come!

Posted by RGDave at 5:00 PM No comments: