Dressing Up the Railroad: A Long Gray Skirt

With much of the messier scenery work on parts of the layout now complete, I have been focusing more on some of the overall layout atmosphere on the Onondaga Cutoff.  This has included repainting and redecorating the entrance stairway to the layout, finishing the scenery on the M&E as it comes through the entrance stairway, and adding daylight LED lighting to areas to balance out the light temperature.

Layout skirting is something that does a wonderful job hiding the storage beneath a layout.  Rows of boxes and tools create an organized but chaotic and distracting appearance.  While flooring will be addressed someday as well, here's where we are headed: 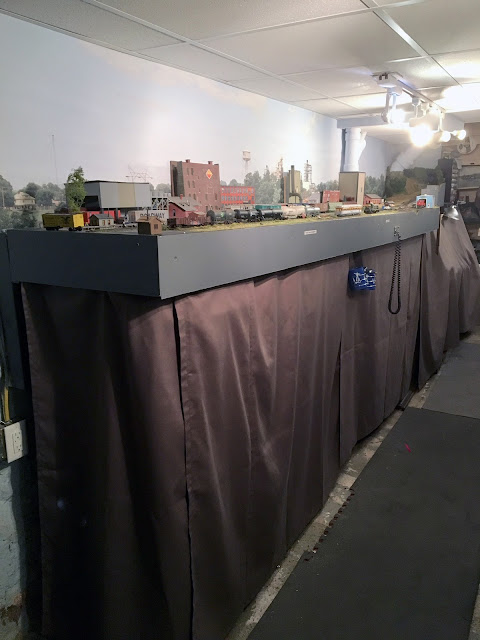 There are a variety of options available, most of them stock order fabric for trade shows and display tables.   I considered these but have several issues.

First, they are only available in rectangles, and with a sloping floor in a 178-year old basement, that would lead to an obviously uneven appearance along the un-level floor.

Further, these will appear tall due to the high layout heights, and I did not like the look of creased and fluted fabric at 48" high.  For the Onondaga Cutoff I prefer a look of flatter fabric.

Finally, these are generally fastened to their tables with Velcro.  Velcro is an issue for me here since I need to regularly access the storage below the layout, and tearing velcro off each time would eventually damage the fascia.  I needed more of a 'shower curtain' setup, with fabric that can hang from a support rod or pipe mounted behind the lower fascia, and easily be slid sideways to allow access.

Therefore, I considered another option: custom-created skirting.   A friend of the family loves to sew, and I approached her about the idea.  She advised that buying fabric in bulk would keep the cost down, and taking some careful measurements would allow her to quickly create custom-sewn curtains for each location around the layout, matching the changing elevations and special needs for some locations.

I remembered an article in Model Railroader some years back about layout skirting, where the author used Pex plumbing pipe and brackets mounted up behind the fascia as a support.  Clasp-hooks can hang from the pipe, and the fabric from that.  I made the decision that this was the best way to proceed. 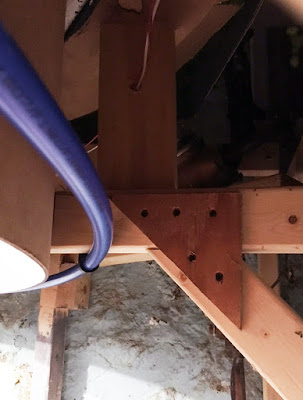 You can see here how the Pex curves along with the fascia.  I used clamps to attach the pipe to the joists.   The elevation matters as you want the pipe high enough behind the fascia to hide the clasps once installed.  The clasps I used are about 2" total from top to bottom, so I hung the pipe approximately 2-1/2" up.   Some adjustments are needed here and there due to how the fascia is mounted, but with some creativity and patience it came together well so far.

Here is a quick before, during, and after series for you: 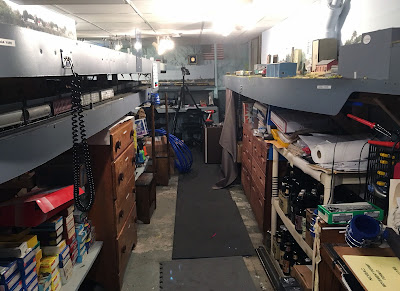 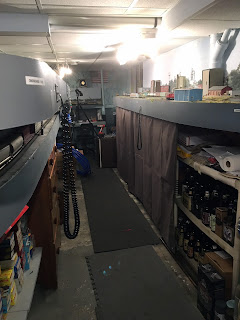 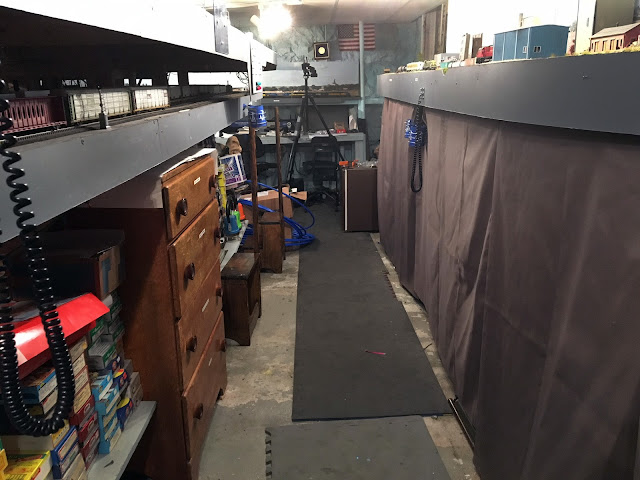 What a change this is, and will especially be once the other side is completed.  Now that this part is installed, the rest will go more quickly, and I expect to have the rest of the layout skirting completed later this summer!
Posted by RGDave at 10:06 PM No comments:

Email ThisBlogThis!Share to TwitterShare to FacebookShare to Pinterest
Labels: Skirting

After a month-long push with some late nights, squeezing in progress when I can, we have arrived at that wonderful 'finished but not complete' state in one of the most important spots:  the first impression of a visit to the Onondaga Cutoff.

Here are few quick shots of the first scene viewers encounter on their way down the steps to the layout space.  This is milepost 265 on the old Delaware, Lackawanna & Western Syracuse Branch, up in the steeply-hilled country south of Syracuse NY.   On my layout, it's now run by the Minoa & Euclid on their daily trips serving customers along the route. 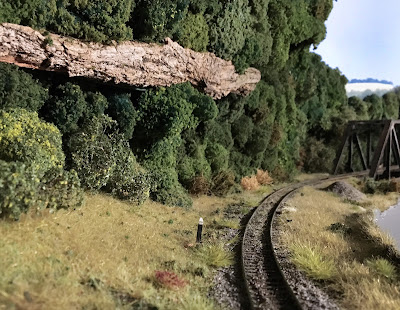 A tighter view shows one of the neat DL&W cast iron mile markers built by regular operator Al T., who you may remember years ago made me neat NYC mile markers and some other details including the Onondaga Yard Office.   Here's a tighter view of MP 265: 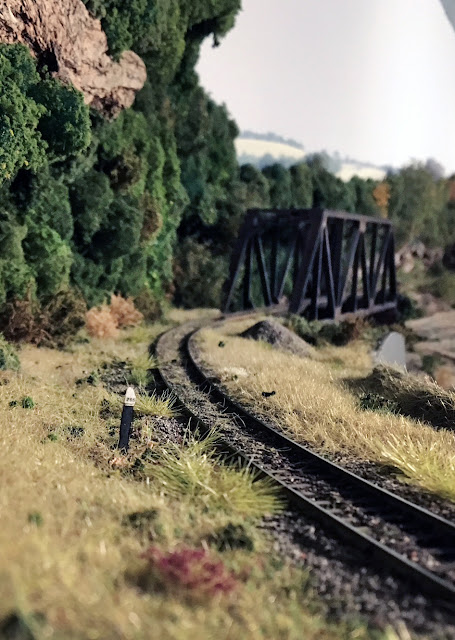 I am pleased with how the trackside bushes and weeds came out this time.  I believe it is because of a new and revolutionary way of installing the highlights - the best way I have found to avoid over-engineering the randomness of nature is to hand off the responsibility for it..... 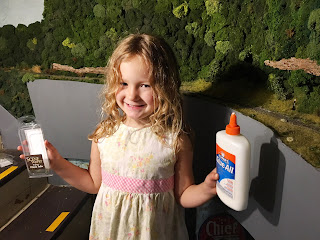 Susie turns out to be PERFECT at randomly placing scenic highlights.  :-) 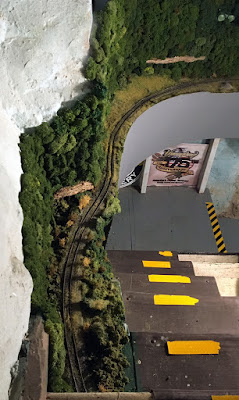 Finally the actual view down the steps, the real 'first impression' of the layout as of this weekend.  This is far more appealing than the random and scattered view that was here before the scenery was installed.  The next step this summer will be to mount and hang skirting below the fascia around the areas that are completed - and that will be a bigger change than any since the backdrop went in.