Here's a quick post to let you know about the second part of the interview I had with Lionel Strang (and Bruce!) on 'A ModelersLife.'   Once again, plenty of fun conversation, some shenanigans and insight into the Onondaga Cutoff and how it came to be.

Posted by RGDave at 5:21 PM No comments:

Email ThisBlogThis!Share to TwitterShare to FacebookShare to Pinterest
Labels: A ModelersLife, Podcast

Throughout my time in this hobby, certain tasks seem daunting just because I have never done them before.

Pouring the water for Snooks Pond was one of those tasks.  Over all the years I've been modeling, I had never attempted to use the available epoxy products or 'magic water' products available.  It was intimidating to a degree to be doing something that was a make-or-break technique on parts of the layout that were so visible.

Still, after all the prep in the last few months, it was time.  The 'dam' I made had dried in place, and all the painting and details were ready to accept the 'water.'  I watched a bunch of YouTube videos and a handful of videos on Trains.com from Model Railroader magazine, and after deciding on the 'EnviroTex Lite' epoxy product, it was time to jump in.

I followed the directions exactly, warming each bottle of the epoxy and the hardener in warm water, then mixing in plastic measured cups exactly as the directions ordered. 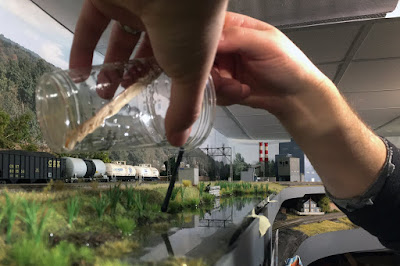 The epoxy was much less viscous than in the videos I saw, thanks to my warming it per the instructions.  This was a critical step.  I poured in the middle of the modeled area, and let the epoxy flow to the sides. 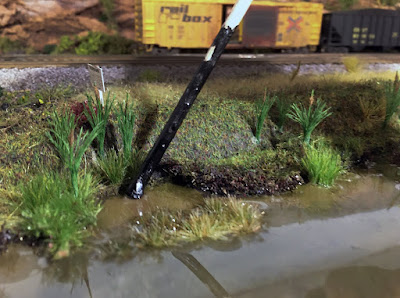 For most of the areas with the details, I needed to encourage the epoxy into the tight spots.  I used old sprues and paint-stirring sticks to do so.   The epoxy has about a 20-minute working time which was more than enough. 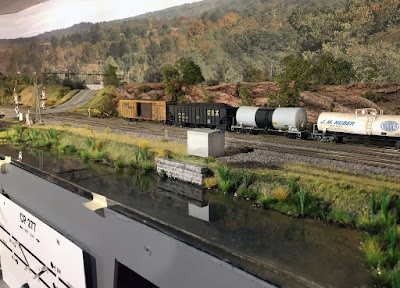 Once all the areas were full to the top of the dam, I had some extra, which I used to fill some of the ditches I'd modeled along other parts of the layout.  This was very successful as well, although more difficult since the epoxy had cooled down and was a thicker liquid.  Still, with some care, it worked out.

Using the leftovers allowed for all the tiny bubbles to rise to the top after about 15 minutes, just like the instructions had promised they would.  At that time, the directions were to use a small torch to feather the exhaust gases over the poured area.  The carbon dioxide gas would pop all of them.  This worked like a charm. 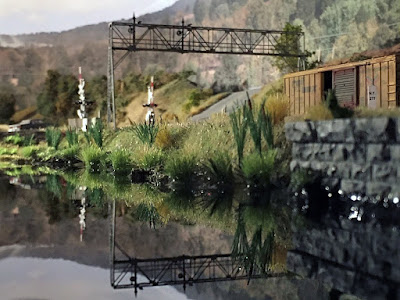 I covered the area with aluminum foil 'tents' to ensure no dust would settle in the new epoxy, and let it cure overnight.   I kept the mixing cups handy to use to test the cure, rather than touch the new surface and let it be damaged.  The stickiness disappeared after about 24 hours, and I removed the 'tents' - what a difference it makes!  And, what a relief that it went well.

This trepidation of trying new modeling techniques for me has been going on from the moment I started to appreciate 'super detail' on locomotives.  I remember a bunch of Model Railroader issues from the 1980's and 1990's written by a guy named David Bontrager.  He did a beautiful job detailing and weathering D&RGW SD40T-2's and an SD50, BN C30-7's, and even a Conrail B23-7.  I loved those then-modern diesels!  He used drill bits I'd never heard of and parts I'd never seen for sale at my local hobby shop, which was a combination train/RC car/game/pet shop.  I didn't know where to start, but I sure loved the look of those detailed models.

I learned of a better hobby shop in 1992 or so, and that was where I got my education on drill bits like the #80, #76, #55, etc.  That shop, the Model Railroad Shop in Piscataway NJ, also had a full selection of detail parts and friendly, helpful staff - finally, I had access to the parts I needed.  After a lot of broken drill bits I started to achieve what I'd hoped for over the years prior.

In summary, don't be afraid to take chances on a new technique or method.  Check YouTube for how-to videos and read the magazines, search their archives online for ideas and suggestions on the topic at hand.  The results are worth the risk!

As we walk through the longer nights of the year, we have some fun news in an experience new to the Onondaga Cutoff - an interview!

In the fall last year, I was in touch with Lionel Strang who is the host of 'A ModelersLife' which is a podcast that focuses on different people in the hobby of railfanning and model railroading.  Lionel is well known to me as an author and former columnist for Model Railroader magazine through the 1990's.  He's done some really fascinating interviews over the last few years, and I was excited to participate when he invited me to be on the show.

So, click on the words above (not the logo!) for a fun interview with Lionel and his buddy Bruce, with more to come.  It has more stories and background information on the Onondaga Cutoff, and me, than you probably want to know, but it's a fun listen and I hope you enjoy.