Of all the advice I have received so far about building a large layout, some of the most valuable has been the advice to have regular operating sessions as soon as possible, and long before finishing scenery or signals.  The reasons are simple - operating sessions will find the weakest parts of a layout immediately, and those weaknesses are more visible and much, much easier to address before everything is covered with scenery.


In my case, several changes have been needed, but none more than those surrounding the staging yard. With the addition of the 'Island' track earlier this year, I added turnouts to CP274, and totally reconfigured CP294 to allow full access to staging and to the Island (see the March 2012 blog entry in the list to your right).  While these changes made things significantly better for the dispatcher and the flow of train movements, it didn't solve the issue entirely. Then, after adding the NYS&W turn and another trainset more recently, staging flexibility again became paramount and the limiting factor on the railroad. 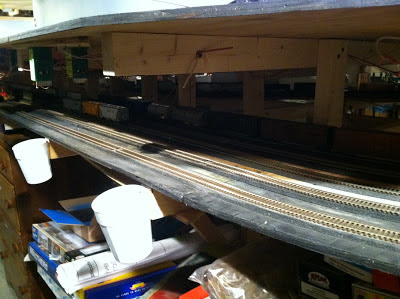 Shown here is the staging yard, about halfway between its ends.  The closest track is S-5, with S-4 beyond, down to S-1 in the back.  Jack, a regular dispatcher and operator on the railroad, suggested that to better utilize the 60-foot long staging tracks S-4 and S-5, it would be very helpful to install crossovers midway between the interlockings, as this would allow power or trains to come in on S-4 or S-5 and exit on the other track, even if something were blocking them from the front.

This was going to be a major project.  I decided to use a Walthers (Shinohara) Code 83 'double crossover' that makes use of a diamond to reduce the length of the crossovers.  While this would be very unlikely to be used on prototype freight roads, it saves a tremendous amount of space in staging!  However, there is nothing that feels good about cutting into smooth-running trackage.  That said, it is true that this would be an important capital improvement.  I began work Friday night and completed it late Sunday night. 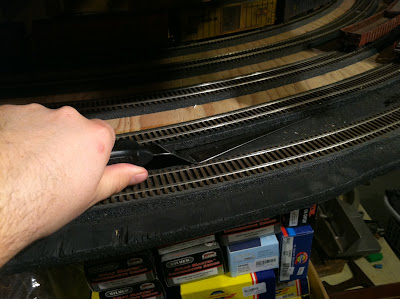 The new crossover has a closer track spacing than what I constructed.  So, we had to swing one of the tracks to accommodate the new crossovers.  First, as seen above, I used a long steel spatula to cut the adhesive caulk below S-4 and loosen the track assembly. 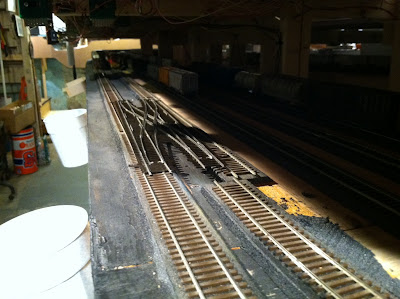 Once the roadbed was free, I was able to gently but firmly adjust the Micro Engineering flex track to relax the curve on S-4 a bit, all this while leaving the foam roadbed attached.  Foam roadbed saved the day here!  In the photo above, you can see the cut-and-throw in the track to accommodate the crossovers as I test-fit the installation several times before making any cuts. 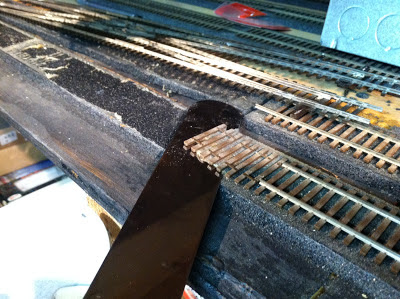 After moving S-4, I removed just the track from the roadbed on S-5, since the S-5 alignment could remain the same.  This was a gentle, careful process, done after cutting the rails.  Slow & steady.﻿
﻿ 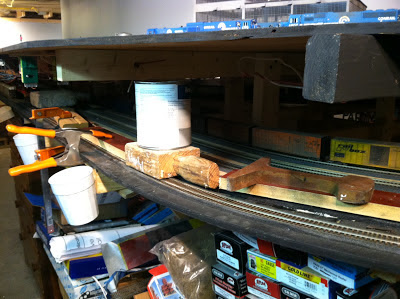 I cut ties off the ends of the crossover, slid rail joiners down all the way until they were clear of the ends of the new track, and then glued the new trackage in place, taking care to also slide the joiners onto the new connections.  This was a delicate, trial-and-error process, but everything came together.  Above, you can see the weights on the newly-glued track and roadbed while it cured overnight.﻿ 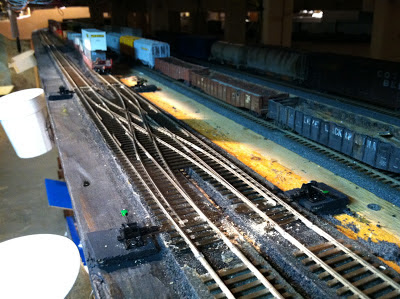 Finally, after removing the weights, I installed ground throws and feeder cables to the new crossover, then carefully adjusted gauge and the switch points using a test car and jeweler's files to ensure everything rolled smoothly.  All that remains is to install ties beneath the joints, and we will be set to use the new "Midway" crossovers at the next operating session!

Finally, HAPPY THANKSGIVING to all of you out there - I am thankful for this great hobby, for the ability to be constructing a big layout, and for the community of modelers that appreciate it.  Most of all, I'm thankful for my wife and family.  Their support makes this project possible.

After a longer hiatus than usual here, I'd like to welcome you back to the blog!  2012 has been a year of new experiences; a high-contrast time, as I like to say.  New highs and, yes, some new challenges that may qualify as new lows.

Thanks to the graciousness of my wife, I was able to get away for a break from reality, and choose Cresson, PA as the place with some good friends during what have been some crazy times.  That trip yielded some great images, such as NS 11A, an Altoona, PA to Conway (Pittsburgh), PA manifest freight coming west past eastbound coal loads at Cresson, PA: 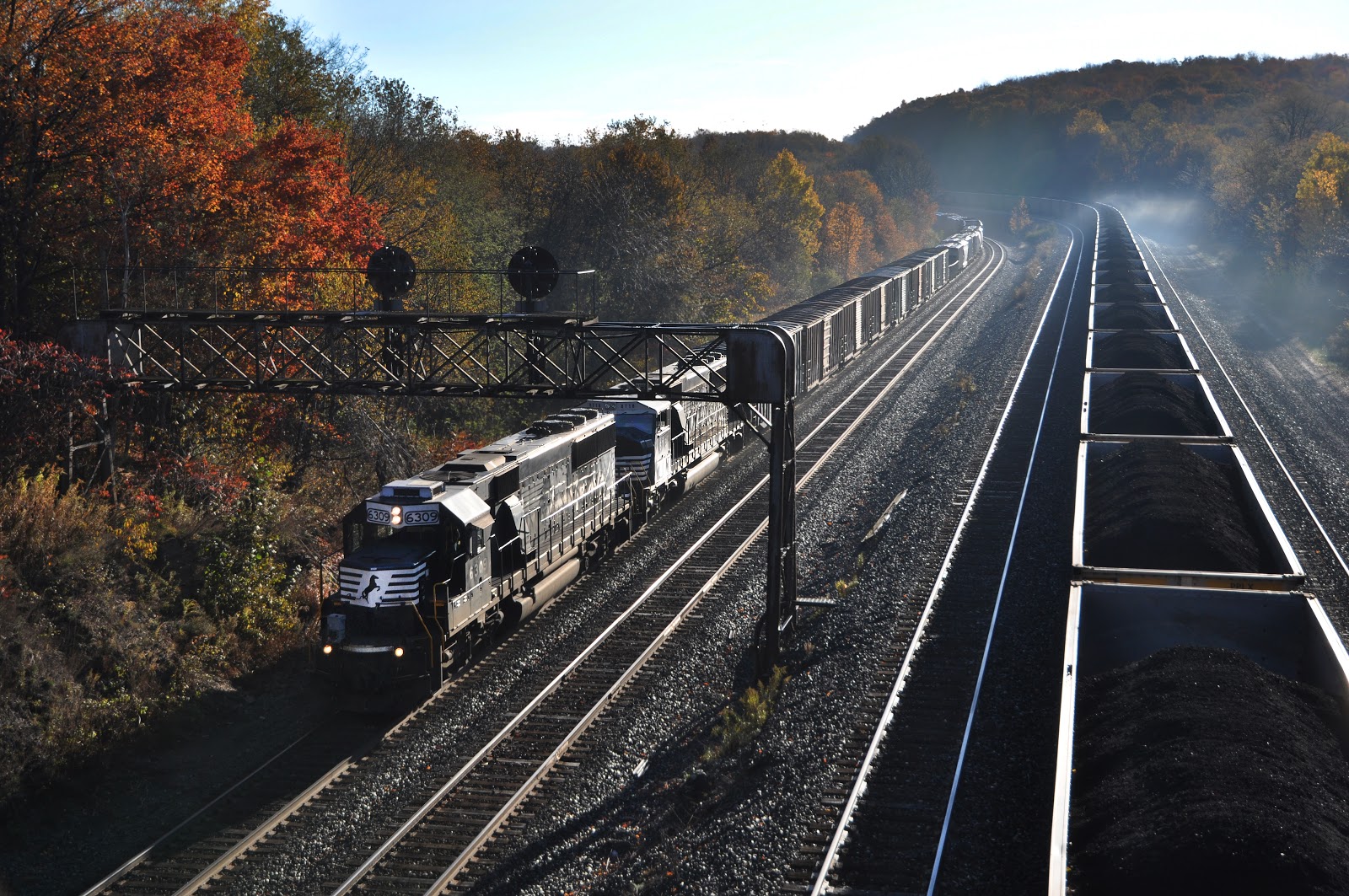 Back in the 'real world', I'd like to thank those of you who have inquired as to how we did with all the chaos from Hurricane/Superstorm Sandy.  We are safe and sound, thanks, and that is indeed a blessing.  Our house, however, took quite a lick during the height of the windstorm that came with Sandy: 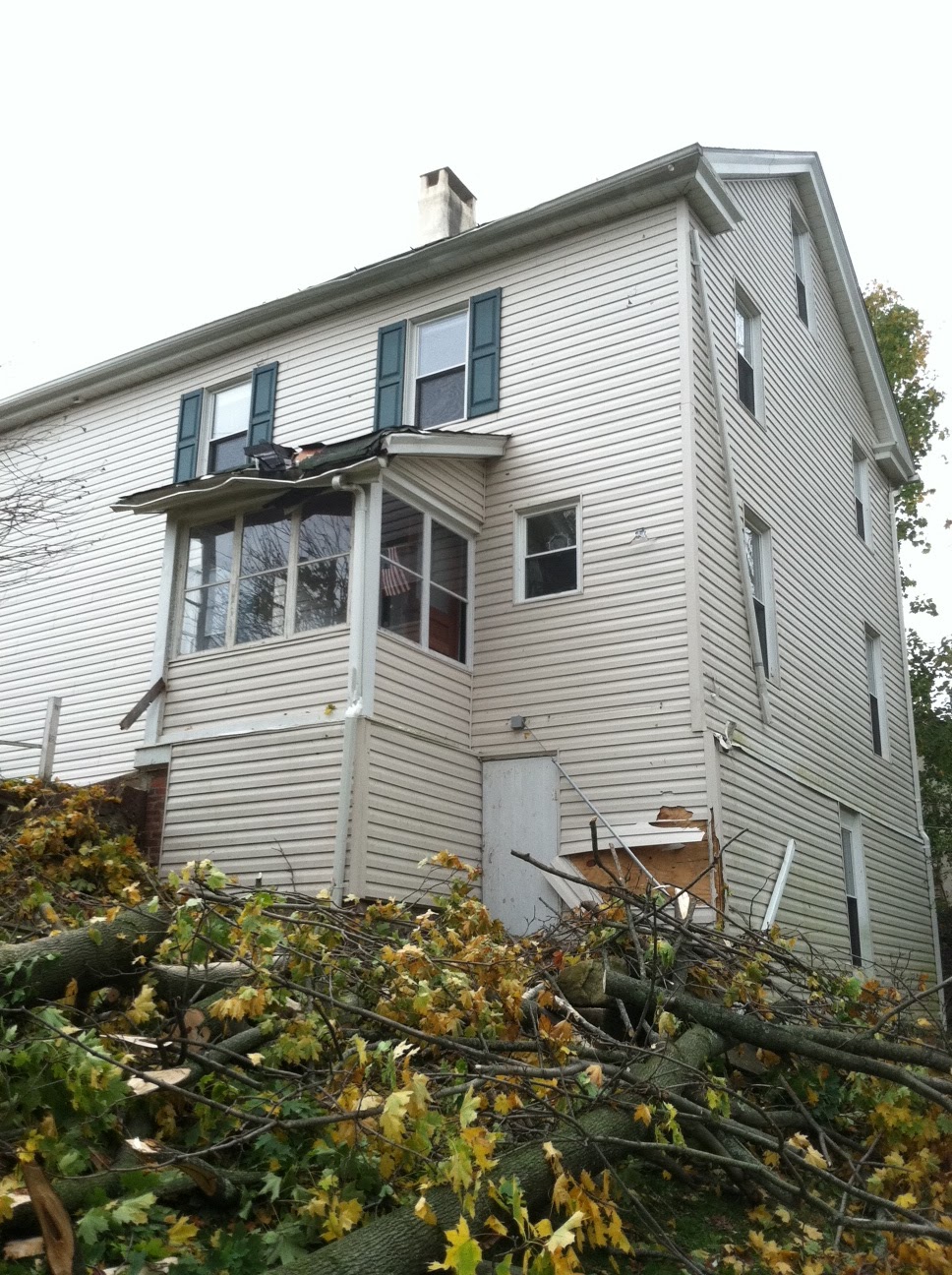 Thank goodness for quality construction and old, overbuilt houses.  And, thank goodness for the fact that the 150+ year-old Norwegian Maple that came apart wasn't just a few feet closer to the house!  (The model railroad, BTW, is fine, thanks :-)  After such massive, epic damage, both work around the house and work at NJ TRANSIT have been quite a stretch.  As I found a few minutes here and there, I was able to finish up my latest kitbash on the Onondaga Cutoff, this time resulting in Conrail B36-7 5023: 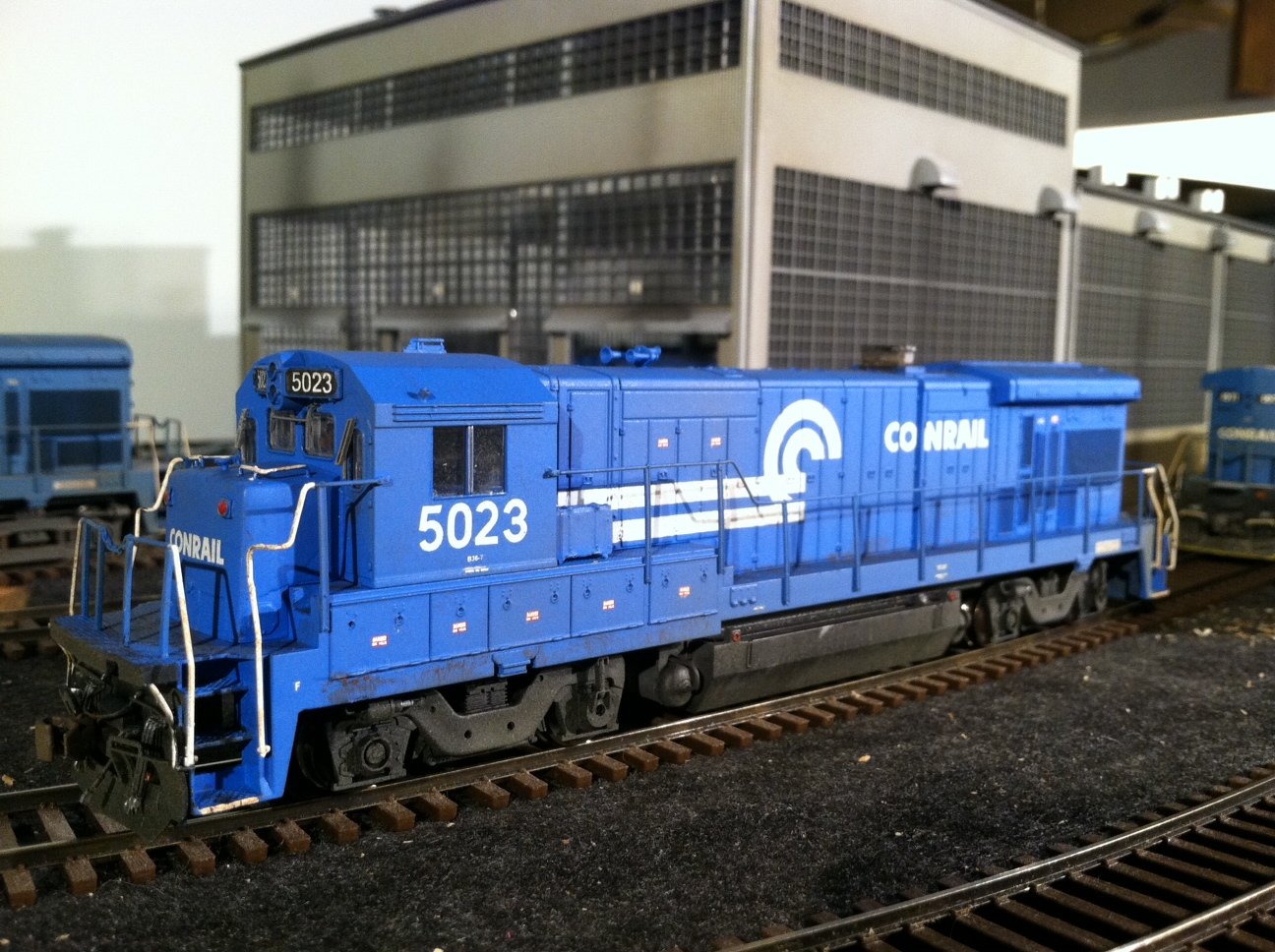 Let's put it this way:  in 2012, as you regular readers know, my wife and I welcomed a beautiful baby girl into our world.  That, of course, brings with it a total shift in our world and lifestyle.  It was harder than expected, but is getting better and is just an amazing experience.  But it's worth mentioning that in addition to that, we in New Jersey have had a series of events that are not typical of New Jersey.  Over the summer, we had a significant earthquake, and now we're dealing with record coastal flooding.  We had record winds, and a record warm winter, but only following a record snowfall in October 2011.  Then we have more snow in early November 2012.   I don't know what's coming, but I do know that the results will continue to require effort and time away from the model railroad.  So, I need to keep pushing, keep fitting things in where I can. 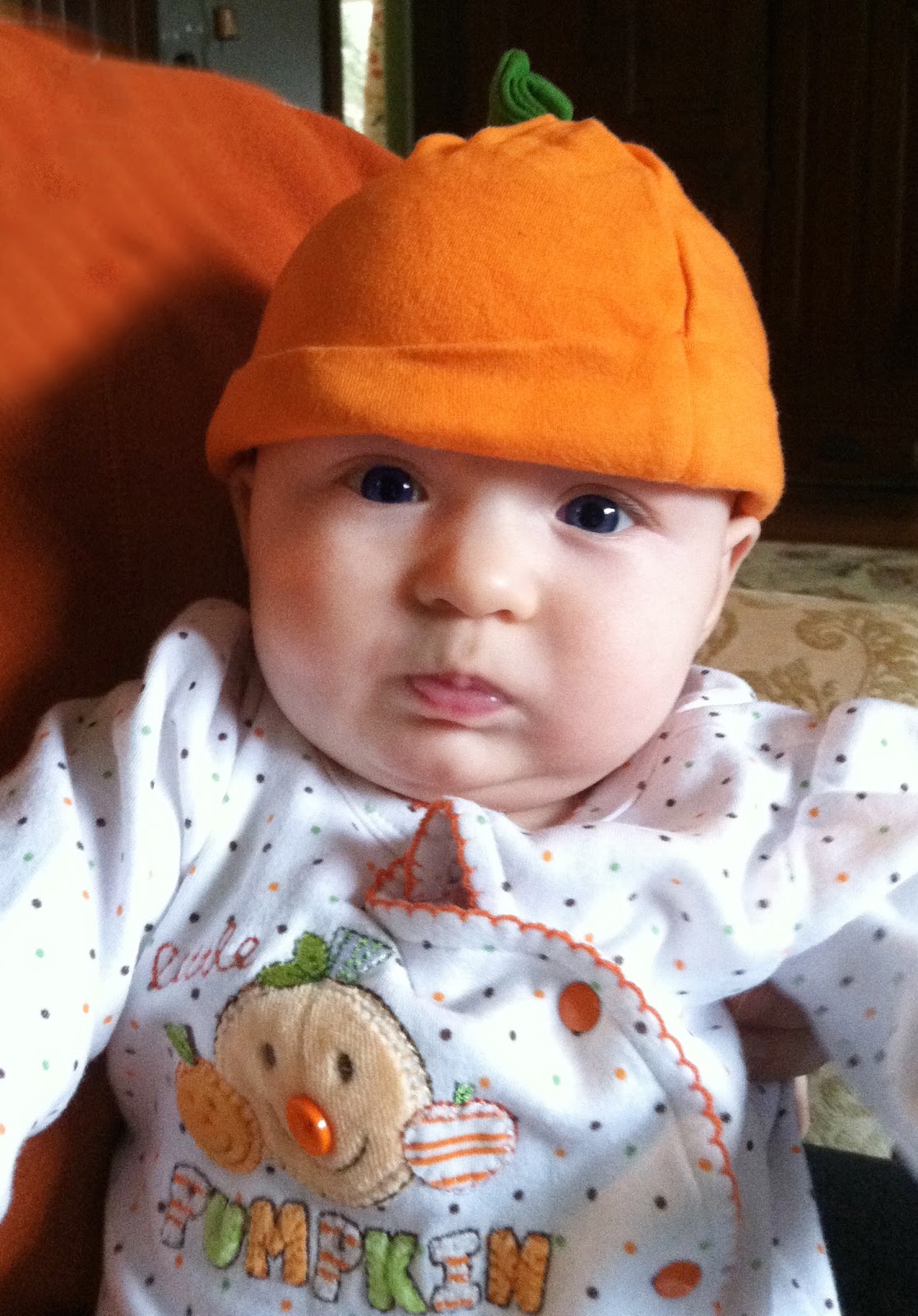 And, yes, Susie is doing very well.  She's a happy, healthy 4-month old little girl, and this brings new meaning to each moment!

Be well, and I will do my best to bring you more model railroading sooner than later!