Progress on the layout varies a bit by season.  Looking over the 12 years or so of entries here, in most cases there is a load of progress on the Onondaga Cutoff in the winter and spring which tails off a bit once we get to the warmer months.  Part of this is more outdoor activities and household maintenance tasks, and more of it is using free time for trips or helping on other's layouts, too.  It's all a welcome part of the hobby.
Some of those trips are just local jaunts with the kids.  Kristen and Susie had a weekend Girl Scout camporee last weekend, and so the boys and I had a weekend to spend time together.  Teddy calls that "boy time" and looks forward to it, which warms my heart!  Pete & Teddy wanted to watch trains, see some new things, and explore together, and so we did just that. 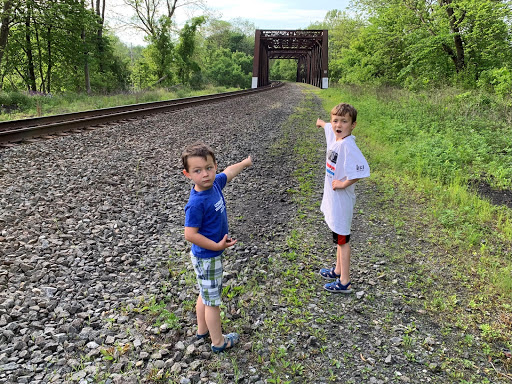 Along our local mainline, the NS Lehigh Line across central NJ, we did some hiking along the rivers and found a new-to-us through truss bridge.  Teddy still loves bridges of all types and especially railroad bridges.  They were amazed!
During the evenings, I made time to finish a few projects that had been hanging around the workbench.  Months ago I finally purchased a vacuum car for the layout after finding a good deal on eBay for one.  It was the Lux model from Germany but works seamlessly with my DCC system.  But, I thought the bold German lettering was a bit much.  So it got a coat of paint, replacement couplers, and new lettering for a plausible piece of Conrail maintenance equipment.  Here it is, awaiting final weathering, after which it will join my CMX track cleaner car in the setup night maintenance train. 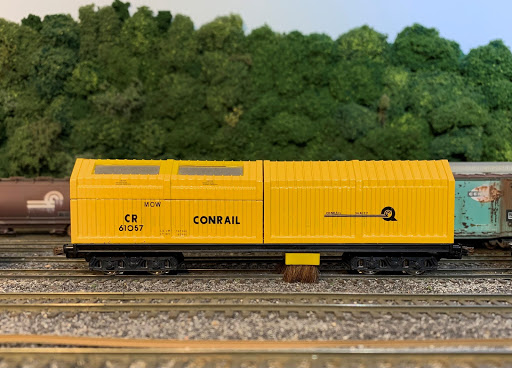 And, some of the long term collecting of Conrail covered hoppers is beginning to pay off.  Thanks to amazing weathering by Lenny Harlos, we soon will have a unit grain train for the Onondaga Cutoff, which fills yet another gap in our operating plan.  Here's a sneak peak of work so far.

As spring opens up in to summer, and as pandemic restrictions seem to finally be waning, it's exciting to look forward to so much that we used to take as guaranteed.  Operating sessions, family gatherings and road trips - all these things are coming back soon and it's an exciting time.  Best wishes to you on this Memorial Day weekend, may we keep in mind those that have given their life in service to our community and our nation.
And may the best still be yet to come!
~Dave

Posted by RGDave at 8:12 PM No comments:

Upgrading the Tower at CP 282

A continuing vision for the Onondaga Cutoff is to 'Let Experts Be Experts.'   We've discussed that before, and it is manifested in different ways.  Skilled hands helped with benchwork.  Trusted advice from Model Railroader and Railroad Model Craftsman guided track installation and wiring.  Computer and IT experts helped me with networking.  Signal professionals did the signal design and guided the installation.  Transportation Planning professionals designed the car-forwarding and locomotive distribution systems, and design each operating session.  The list goes on, but it is clear that the total is much greater than the sum of the parts.

Recently, I had been searching for a suitable permanent model at CP 282 to represent an old NYC tower, repurposed as an office.  My vision was to model the tower that once stood at SJ interlocking, which became CP 293 under Conrail's tenure.  Al Tillotson, a talented modeler and regular operator on the OC, had contributed a foam-core and photo-printed stand-in that was suitable for its purpose for the last several years.  However, my goal was to model the brick and mortar construction from the 1930's as NYC upgraded its route through Syracuse. 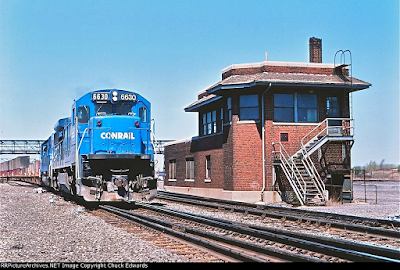 SJ was a critical interlocking that included not just the Water Level Route mainline but also the old Auburn Main, the Freight Bypass to the north, and the Lackawanna Oswego main line and interchange - plenty to keep the operator busy.   By the late 1950's though, NYC was installing new Centralized Traffic Control on its main routes, which allowed interlockings to be remote controlled from many miles away.  This made the tower operator and manual interlocking redundant.  The machinery was removed in the late 50's but the maintenance crews continued to use the tower as an office for decades to follow.  By the mid-90's, though, the end came and the structure was demolished.

I worked with Perry Squier, a local modeler and expert scratch builder, to move forward.  Perry offered to build the tower if I could find plans.  Through the internet I came in contact with a former Conrail employee that - believe it or not - rescued the actual blueprints for this tower from a dumpster.  Amazed, I reported back to Perry who was surprised and pleased that we'd located the actual plans.  I made copies and Perry got to work. 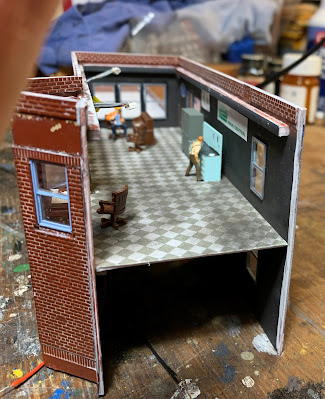 Perry asked that I do any interior detailing, which I did during a test-fit of the structure.  I also added lighting before returning the project for completion.  Perry delivered the final structure after several months of work, and I installed it on the layout - what an improvement! 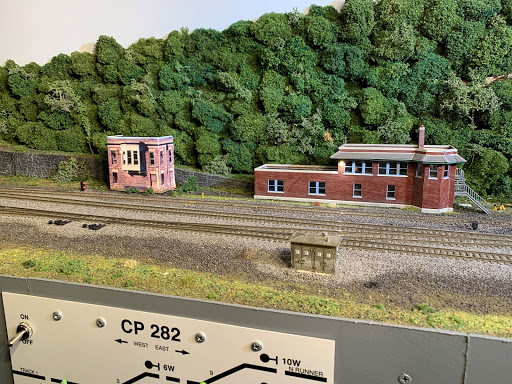 This adds a tremendous amount of NYC heritage and flavor to a scene that was already nearly complete.  The old tower was removed, and will be headed for my boy's layout in the attic, thanks to Al's generosity.  The new tower does an amazing job at night! 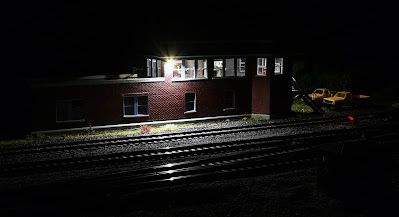 Another example of collaboration that turns out for the best: asking experts to help has made this layout greater than it could be if I were doing it myself.