A Quick Vote of Confidence for Athearn

It is easy to find fault today in so many parts of our lives.  Maybe that's always been true, but regardless, I find it important to give praise when it is due.

Athearn, one of the older manufacturers of model railroad items, is well represented in my collection of locomotives and freight cars.  Recently, I purchased one of their beautiful models of a GP40-2 decorated for Conrail, and was disappointed to find that the details on the model, while prototypical for 1977, did not match the description, which matched my mid-1990's era. 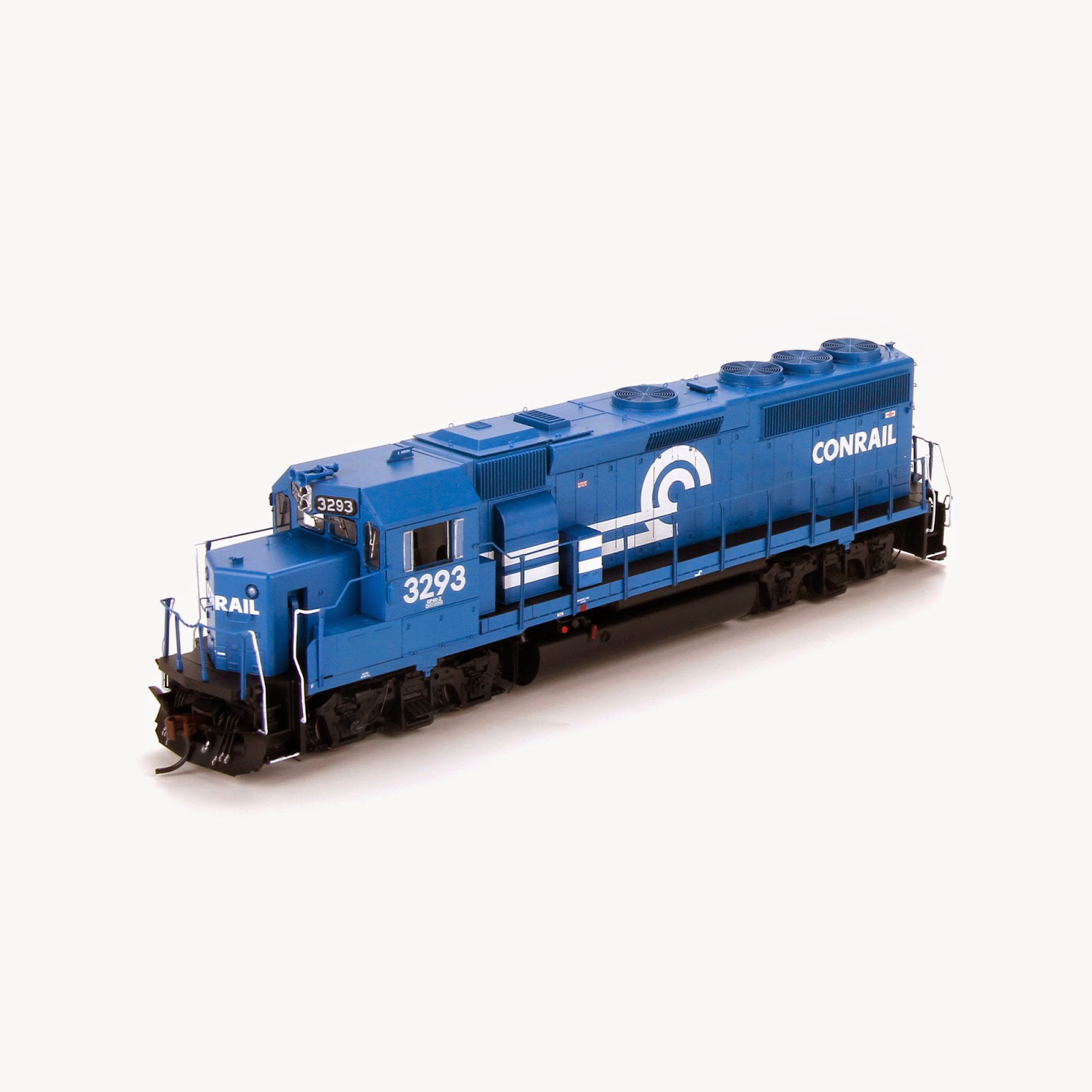 This view of 3293, from the Athearn website, is how I thought the 3312 would be detailed, based on its description on the Athearn website.  My 3312 came with different trucks and a different plow, requiring about $25 in parts to correct.  I contacted Athearn and while they would not give me a credit to match the cost of the parts to 'upgrade' the model, they did offer to send me a new freight car of equivalent price that fits my era.

It is a small gesture, yes, but I would argue that this is excellent customer service.  In a world that is quick to judge, I offer this story so that we can all appreciate that there are still companies out there that are here to help!

Email ThisBlogThis!Share to TwitterShare to FacebookShare to Pinterest
Labels: Athearn

There's progress on several fronts lately.  First, another locomotive has joined the roster on the Onondaga Cutoff, this one another western visitor and the first Cotton Belt locomotive to officially join the fleet:  SSW 9378, a model of one of Cotton Belt's SD45T-2's. 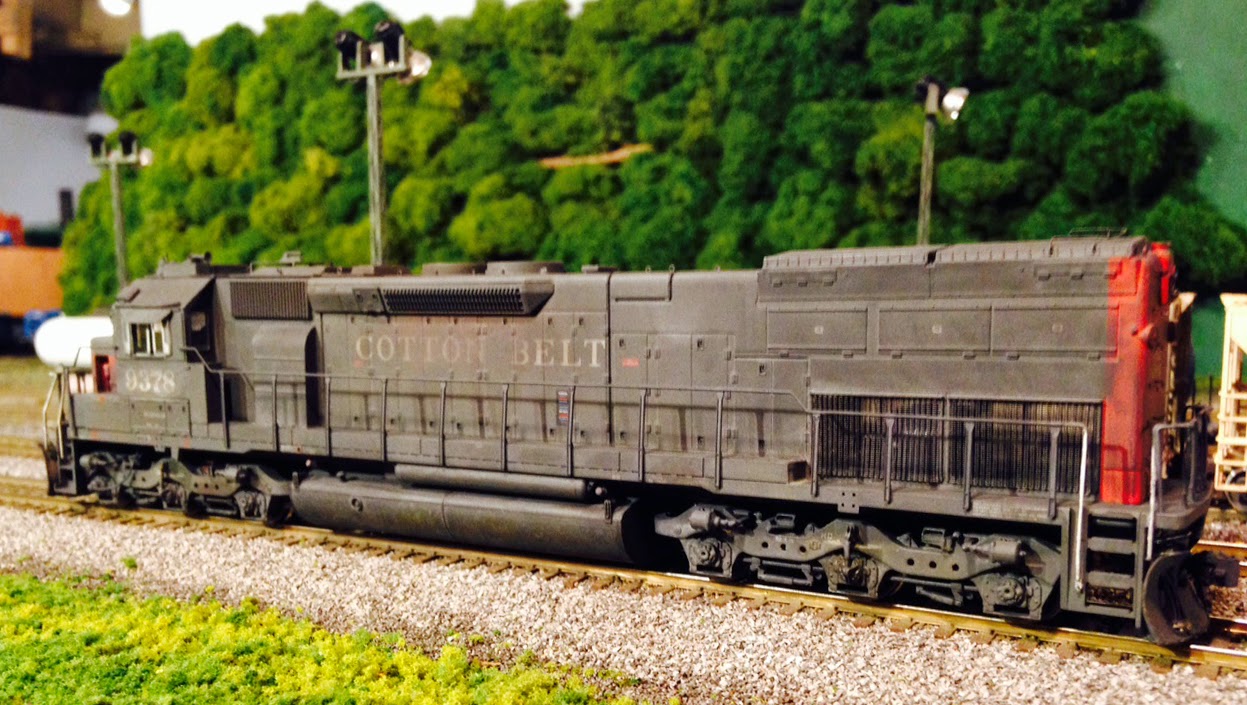 As an unabashed fan of the Denver & Rio Grande Western, as well as all the railroads of the desert Southwest, I have a side project of modeling the locomotives common to that area.  Thanks to the variety of run-through power on Conrail's Chicago Line in the 1990's, I can even use them now and again during operating sessions.

Several years ago, Athearn Inc. released this model, which is beautiful even by today's standards. The moldings are crisp and sharp, the details are railroad-specific, the paint is correct, and the model captures the look of the prototype very well.  To that, I added the details that were not included with the factory model (coupler lift bars, windshield wipers, lift rings, MU hoses, and a corrected plow) and a few generous doses of weathering using dullcoat, pastel chalks, brush paint, and an airbrush overcoat of engine black. 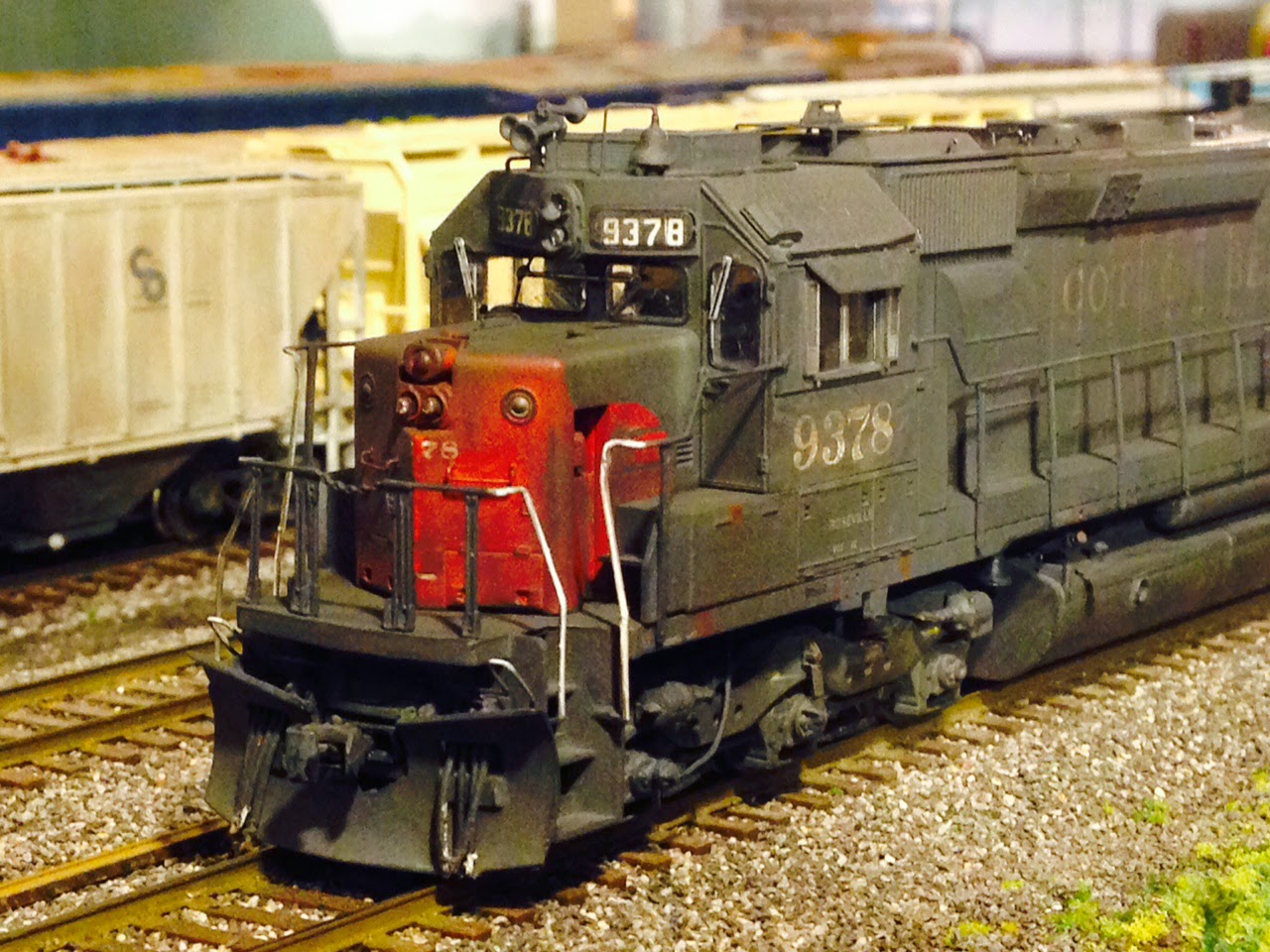 Here's a few cab views.  That SP-style Gyralite (between the numberboards, with the headlight on the nose as per SP practice) works as well, a neat effect! 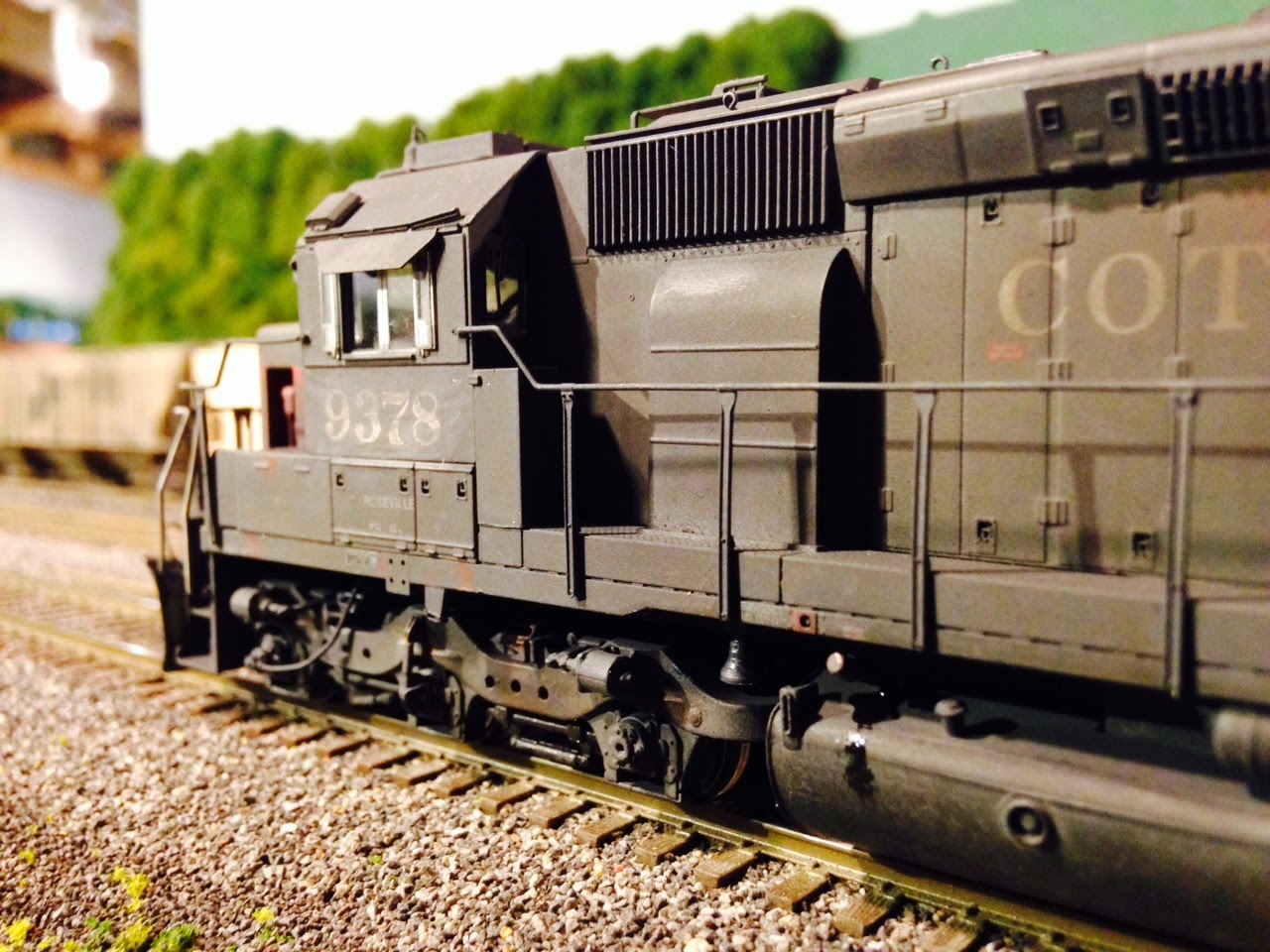 The most recent trial and error process has been developing a ballast mix for use in Onondaga Yard. I mentioned in the last post how I think it is important to get the right mix for a modern yard, as opposed to one from the steam era.  Input from Jack and prototype photos have led to me to search for a new mix.  I have begun to experiment with a more gray mix, called "Northern Pacific" by Arizona Rock & Mineral Co., as well as mixing in some fine-ground turf by Woodland Scenics.  Once this dries out in a day or two, I will have a good comparison, and we just may have found our ballast mix for a yard that is well-maintained but also well-used! 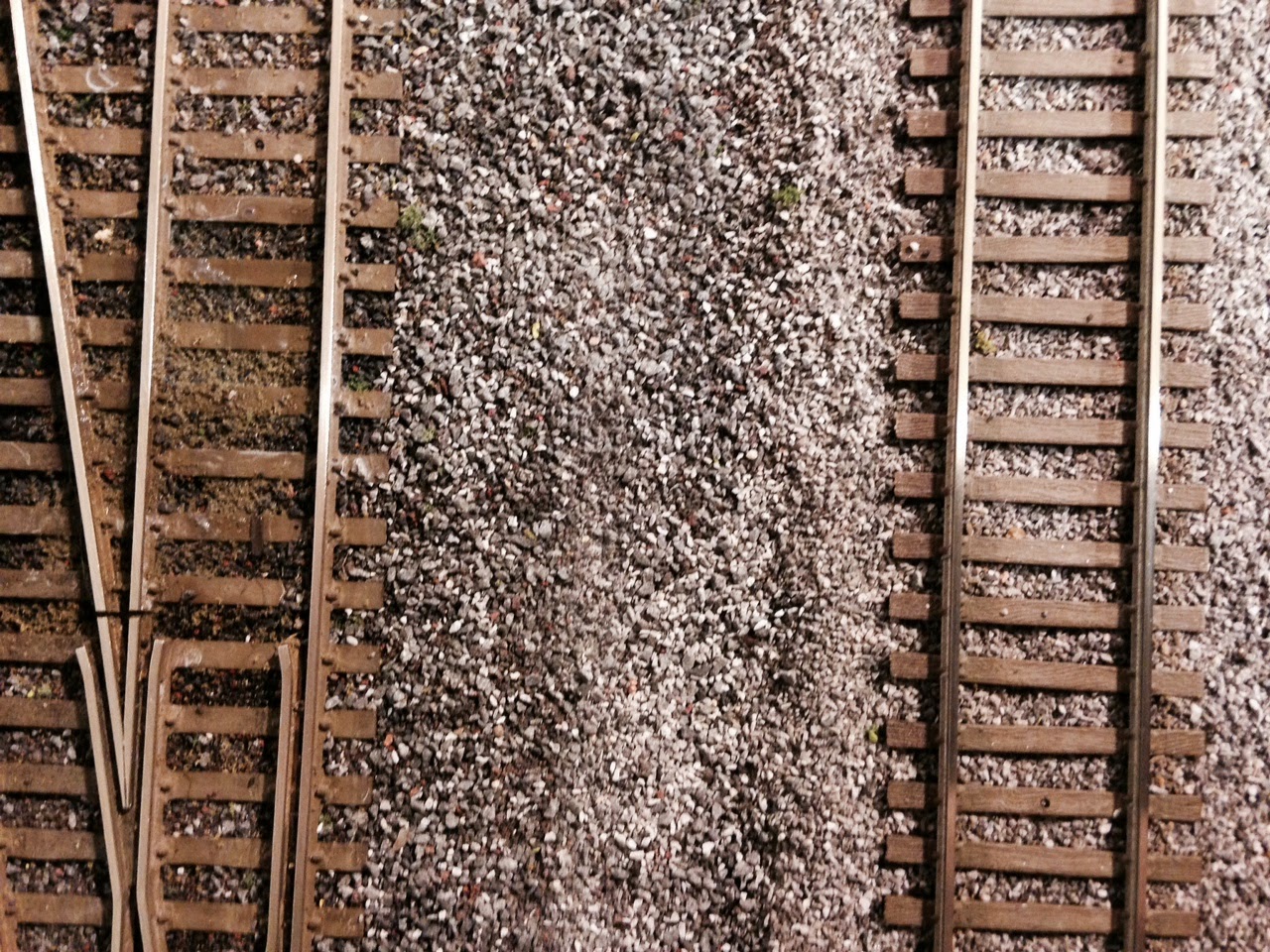 Here's a close-up view of the frog and the 'mud' that gets pumped up around the frog and joints in a turnout.  I think this looks better than ballast alone: 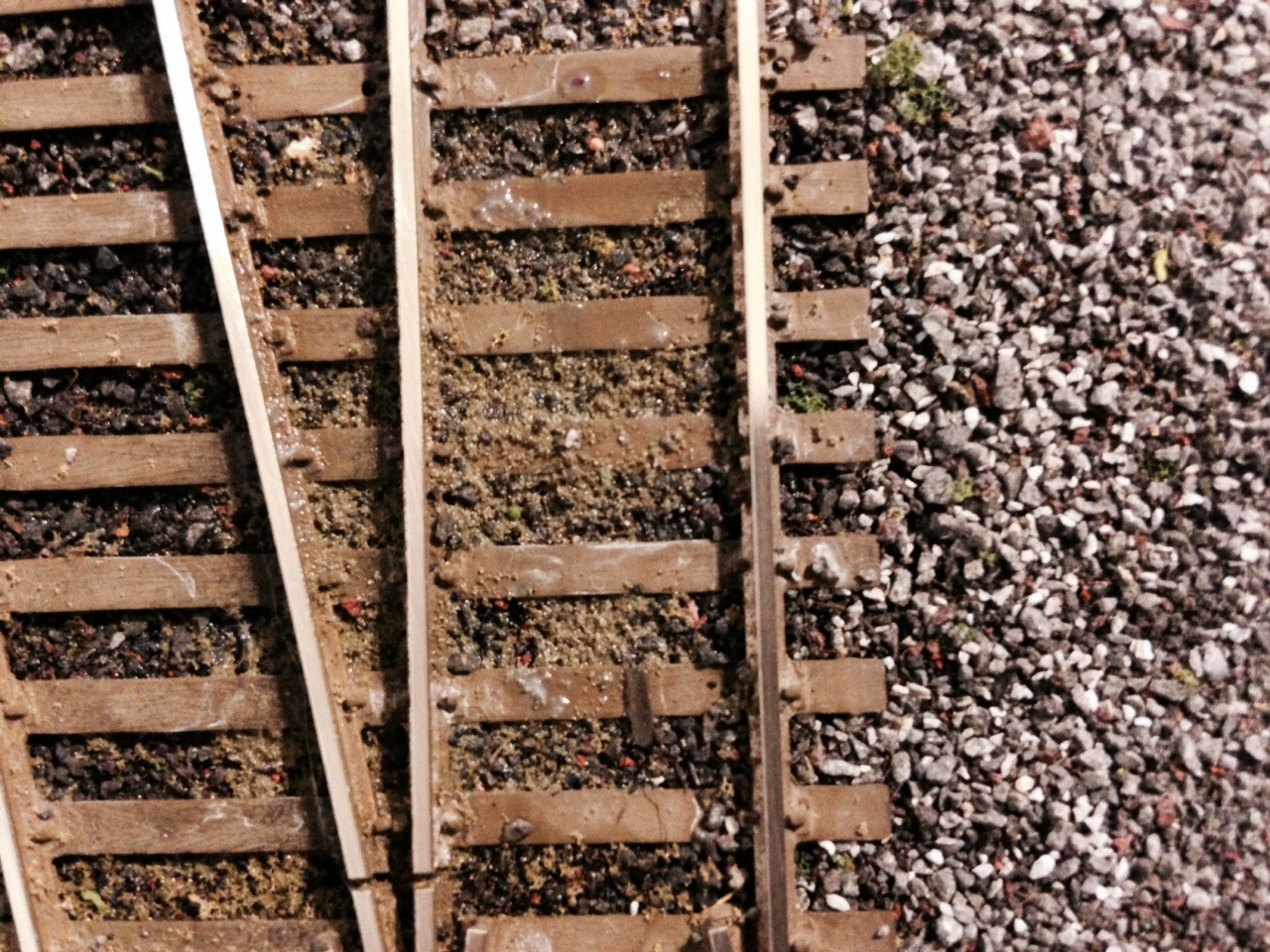 As spring develops here in New Jersey, there will be less open windows of time for the Onondaga Cutoff, but I hope to be able to sneak in time here and there to continue the great progress of this winter.  Little by little, this railroad is coming together.