The old adage is true:  any progress is infinitely more than no progress.  As we have discussed before in this blog, one of the constants of model railroading is that you won't ever finish anything if you don't manage to make some progress.  Even with life keeping me hopping on multiple fronts in the last month or two, I force myself to get down into the layout room each night and do something.  Anything!

As you saw last month, the latest project is to finish up the 'permanent' buildings for the Peter Doelger Brewing Company at Euclid.  The next step was adding some lighting. 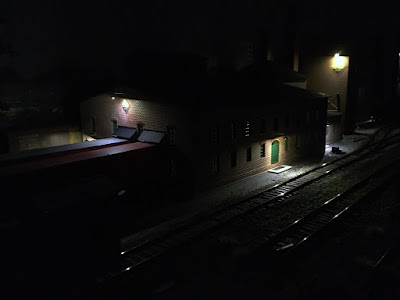 I've selected exterior lights to highlight the facility at night, and included some signs with logos from the actual brewery to help set the place.  I found the lights on ebay from a small manufacturer in China, so for about $28 total, I got 15 wall-mount lights, with pre-wired micro LED's mounted in brass fixtures.  They are really nice and just what I needed for this building. They arrived 10 days after I ordered, shipped to New Jersey in a small box.

As each was installed, I turned the system on to check to make sure that light was working.  Each has its own current-limiting resistor and I think the color of the light is spot-on for my purposes.  It makes for some dynamic night scenes! 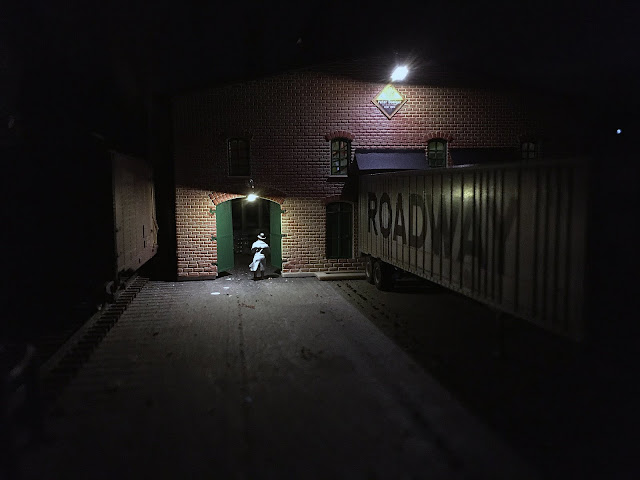 I started to envision the concrete sidewalks and concrete apron for the grain tracks as well, since the kit didn't include any pre-molded.  I decided to make these out of styrene sheet, taking a nod from Jason's success with roadway surfaces around the layout.  The areas between the building and the industrial guardrail along the M&E main track would be prime candidates and offer a different texture for the eye of the viewer. 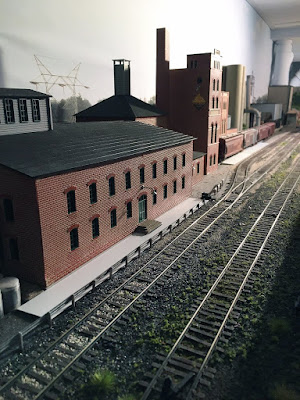 I measured, measured, and measured, then cut.  Then test fit, then final cuts.  It is slow work but the results will be worth it with a well-weathered concrete walkway down the entire facility, including the barley unloading tracks which will be completely 'encased' by the modeled concrete.

Now it's off to trick or treat with the kids!  Happy Halloween!  Plenty more OC progress coming next month!

Posted by RGDave at 9:00 PM No comments:

A Visit to the Chicagoland RPM....and Legendary Operations

In a mark of just how busy these last few weeks have been, I’m making a rare blog update from the phone, making use of the commute home.  While most of this month had been good stuff I’m running right about at capacity these days, hoping that I’m not overlooking anything of consequence!

The month began with unprecedented good news when a project I’d suggested and worked hard on came to fruition:  three ‘Heritage Engines’ were released to the world by NJ TRANSIT on October 2, 2019.

Then, I had the good fortune to be able to attend the famous Chicagoland RPM (railroad prototype modelers) meet at Naperville, IL this year.   The RPM is famous for is clinics and model displays, and for the list of accomplished modelers that attend.  For me, it was also a chance to operate with groups on Bill Darnaby’s famous Maumee Route, and Bob Hanmer’s well-regarded GN/DM&IR layout. 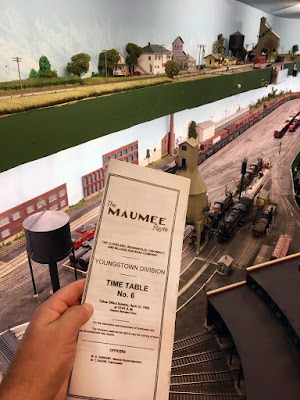 First up was the Maumee, a railroad I’ve read about for decades in Model Railroader, Railroad Model Craftsman and the rest of the hobby press.  Bill has created a masterpiece of operation, plausibility and detail.  The Maumee represents a fictional road crossing northern Ohio, in the mid 1950’s. 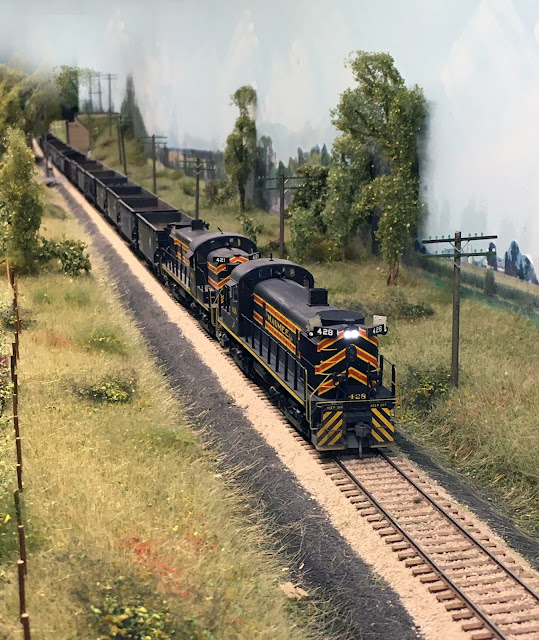 My first run on the route was passenger train #18, and I was too new to even think of taking a photo of that run.  Making your first run on a timetable & train order railroad that is new to you is a nerve-wracking experience!   But the second run, an eastbound extra empty coal train, allowed me to grab this view of the Ohio countryside.  Wow! 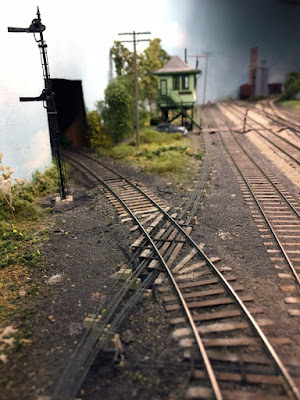 Bill’s attention to detail is truly amazing.  Each interlocking tower is built and detailed with the full rod system laid out for the viewer.  Here’s Miami Jct with the Maumee main crossing the NYC Water Level Route. 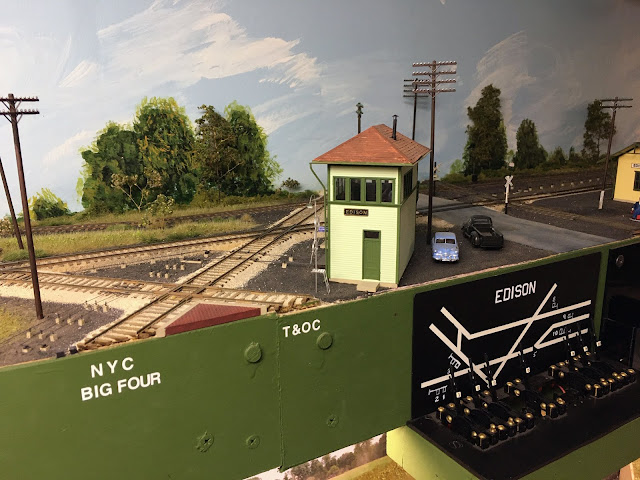 Another amazing junction is at Edison, with diamonds and a siding.  Bill has his operators use modeled Armstrong levees to line their route and indications through the plant.  Incredible execution of a great idea.  It was an honor to participate! 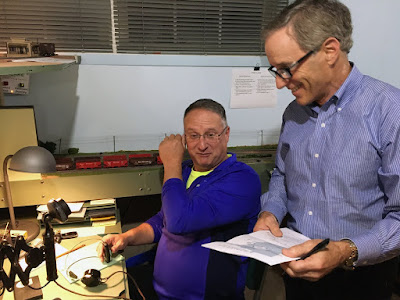 After a day at the RPM and exploring some of the area, we did another session at Bob Hanmner’s home with his Great Northern/Duluth, Missabe & Iron Range layout.  This layout depicts the neat trackage rights agreement between both roads in central-eastern Minnesota during ore season.  Here, Jerry Dziedzic and Joe Binish enjoy some commentary during the session. 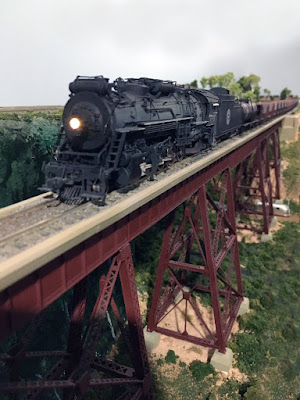 I love this spot, a big DMIR bridge and ore train behind a massive 2-10-4 steam engine. 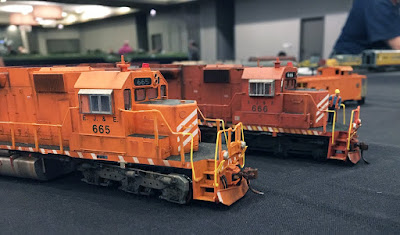 The RPM itself was a great one too, and a special treat was the local modelers displaying their work.  Here’s two beautiful Elgin, Joliet & Eastern SD38’s. 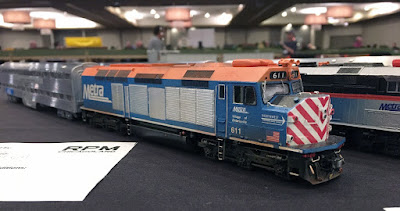 And, finally, a really neat Metra F40C.  These models reminded me of a trip with Jack in 1997 to watch trains around the country.  We traveled by Amtrak and had an amazing series of adventures that in hindsight were almost utopian in their storyline.   It was a great way to close out a great trip, made despite the usual chaos and headwind of middle age.   Special thanks as always go to my wife Kristen and children Susie, Teddy & Pete for the time away!   They were all waiting for me upon arrival at the airport which itself is a dream come true.

More to come!  Lots to share as 2019 continues to be a banner year!