As the Year Draws to its Close

Good evening!  Once again we're coming to a new year, and after the last few years we all know that we have a tremendous amount to be grateful for.  While loss and darkness always exist, light and hope balance these things, and keep us driving forward, whether we think we can, or not.

And so on this New Years Eve 2021, let's look mindfully at an image I made more than a decade ago. 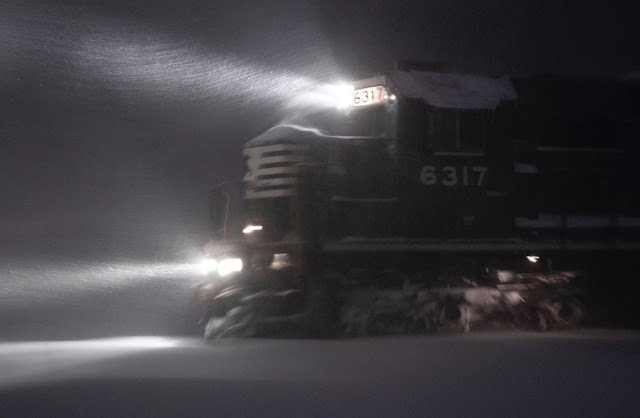 The story for you:  A perfect storm came together atop the Allegheny Mountains in 2010, and the resulting blizzard slammed operations on the former Pennsylvania Railroad mainline.  Snow was piling up amidst howling winds and by good fortune, we had been holed up ahead of the storm at The Station Inn in Cresson, PA, a few hundred feet from the main line.  Traffic died down even on this critical piece of railroad as the storm grew in intensity.

Hours later the scanner suddenly came alive over the din of late-light beverages and the clanking of steam-heat radiators in the 150-year-old building, and a few of us scrambled to suit up and grab our rigs, rushing out to the fury of a mountaintop storm.  We waded through snow to reach the embankment to record NS 6317 cutting west through the height of the blizzard after midnight on February 7, 2010. I decided on the old school pan shot - Hand-Held, F5.6, ISO 1000, 1/10th of a second...

And for us here on the eve of 2022, I will argue there is a lot to see.  Darkness and uncertainty ahead, but deliberate progress in a forward direction.  Light from its own source, not depending on outside help.  Movement, dynamic change guided by steel rails that are hidden from plain sight.  I find this hopeful, and I hope that you too will find a way forward into the new year, and that the best may still be yet to come.

Imagine playing a game of backyard football and the quarterback from your favorite pro team stops by to play the position.   Or, maybe you're in a cover band at a local tavern, and your favorite pro musician comes by to sit in.

Well, when you hold operating sessions - really, a railroad role-playing game - on your prototype-based model railroad, and a retired dispatcher that worked that territory is willing to sit in and enjoy the session, it's about the same feeling!

Bill Moll is a railroad name around Central New York.  He was an intern at NJ DOT in the early 1980's, and eventually worked for the New York, Susquehanna & Western Railway (NYS&W) at their dispatcher's offices in Cooperstown, NY, in the later 1980's.  By 1992 he was at Conrail, based in the Selkirk NY offices to dispatch Conrail's Albany Division including the Chicago Line, the most important main line in New York and one of the most important in the United States.  He worked through the change to CSX, and retired several years ago but has stayed active volunteering at local tourist railroads as well as historical societies.  After the Covid pandemic hit, Bill ended up finding the Onondaga Cutoff on Facebook - but knew the railroad culturally and operationally from his experience on the prototype!

The Onondaga Cutoff has been grateful for the visits of a variety of people both in the industry of railroading and that of modeling railroading, and having a retired Mohawk Dispatcher visit is right there as a highlight in the top of the list. 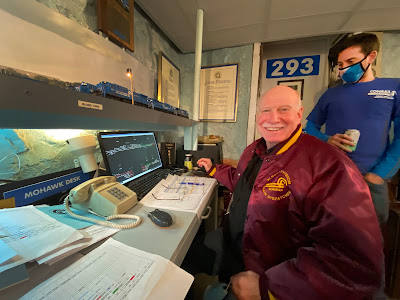 After a run around the railroad, Bill was ready to give it a spin.  Under the steady guide of Chris Lee, one of the regular dispatchers on the OC, Bill was quickly qualified on the territory and proceeded to dispatch the rest of the session.  It was a natural seat for him and a real pleasure to watch the railroad perform in top form, under the hand and direction of a professional. 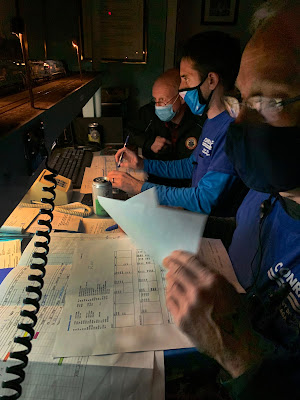 As railroading has grown more automated, with more and more track controlled by dispatchers and centralized or computer traffic control, the role of the dispatcher has grown in importance.  As a kid trackside through the 80's and '90's, the voice of the dispatcher on the radio was almost like a 'god' in the sky: someone that saw the whole picture and reached out to guide movement across the system. 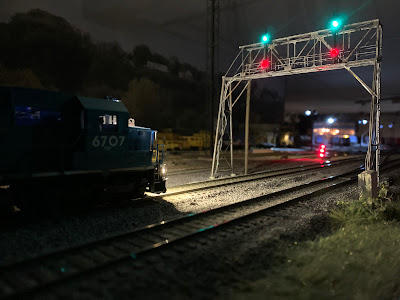 The session was great, and we will be excited to host Bill and his friend Brett again soon.  After the session was an even better surprise when Bill showed us an actual dispatcher's sheet from the Mohawk Desk from 1996, as well as something I'd hoped to add to my collection of railroad items for my whole life:  an actual 'station sign' from an interlocking on the Chicago Line in the Syracuse area, where I grew up watching trains. 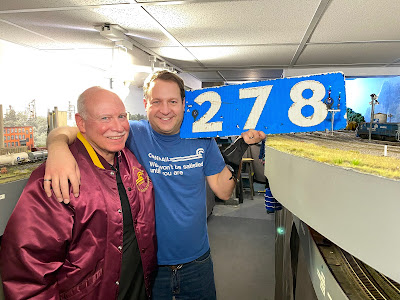 This was a total surprise, and a generous gift from a retired railroader to a current railroader and model layout owner like me.  I am deeply grateful for the visit and it is commemorated by the generous gift of the nameplate from CP 278, in Kirkville, NY, which was removed during the upgrades in about 2014.

This is an evening I won't forget for many years to come.  Thanks, Bill, and Brett!