Going Back, For the Future

Winter has arrived here in New Jersey, and with it more time for modeling and for working towards getting several projects moving forward on the Onondaga Cutoff.

First among those is a new tower for CP 282, which has long been a goal of mine.  The stand-in, generously constructed by Al Tillotson from foam-core and prototype photos has worked well well for several years but a permanent replacement is needed.  Thanks to the internet I was able to track down the actual original New York Central (NYC) blueprints for the tower that stood at 'SJ' interlocking, on the boarder of Syracuse and Solvay, NY, until 1994.  In discussing the project with Perry Squier, a gifted modeler who also lives in northwestern NJ, I mentioned how it would be years before I could have time to do it.  Perry volunteered to help and build the tower so long as I did the interior detailing and lighting.  I am always up for collaboration, especially from experts!

Once Perry had the building constructed, I picked up the project to test fit it on the layout.  Since the prototype has a basement, installation required - gulp - cutting into finished scenery and subroadbed with a jigsaw.  Yikes! 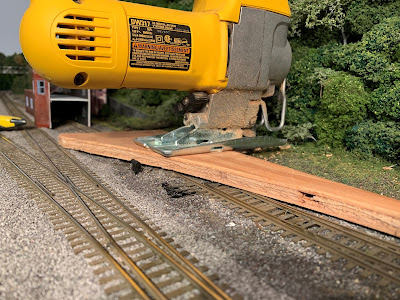 This is never a fun feeling.  I used some scraps of plywood to ensure I didn't destroy the track and signals in the area, and also made sure to tie the wires underneath this spot out of the way so that the saw didn't cut those, too.

Cuts made, I could test fit the tower: 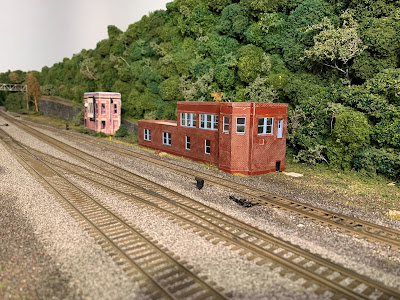 You can see the older stand-in in the back, which actually represents an abandoned version of a Hudson Division NYC tower in the 1980's.  The permanent structure will be built following Conrail practice to repurpose old towers in the 70's and 80's into field offices for maintenance of way personnel - so we're installing an older structure, but one that was still used in 1994.  With that in mind, the second floor office and workshop would be visible and especially at night.  Therefore interior detailing was in order. 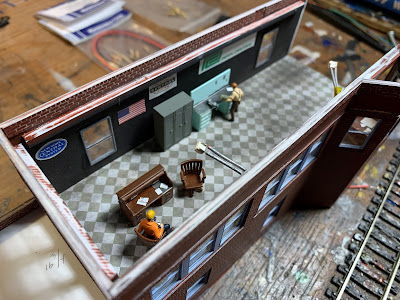 It is time-consuming work, but a printed patterned floor to represent linoleum or asphalt tiles from the early 1960's along with a variety of industrial furniture, purchased from Shapeways.com as 3-D printed items, allowed me to represent a railroad office setting.  I painted and weathered all the details based on my own experience in such converted towers, and added LED lighting which will augment night operations.  Now the towers go back to Perry for roof and soffit installation before final install on the Onondaga Cutoff.

As February 2021 has set in, we have a refreshing change of pace here in northwestern New Jersey in a stretch of good cold weather and regular snowfall.  The kids are amazed and enjoying it, and I am too. 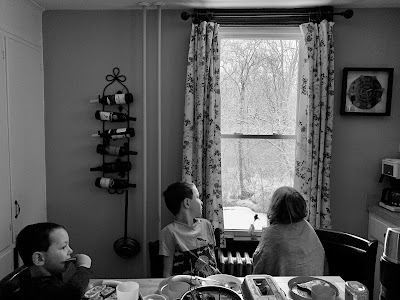 It's been about 5 years since we have had more than a few inches at a time down here on the piedmont, and while the mountains and hills to the north and west have fared better for snow lovers it has been quite a while for even those spots to have weeks of accumulating snowfall.  This winter we have had snow on the ground now for close to three full weeks, which is a true winter feel and a pleasure to share with the kids.

Finally, we have another Facebook Live event this coming weekend, Saturday February 20 at 9 p.m. Eastern.  Just head on over to the OC Facebook page to watch live with us, or to see it at a later time:  https://www.facebook.com/onondagacutoff/

Enjoy the winter weather, and I will be back soon with more progress on the Onondaga Cutoff!

Posted by RGDave at 5:00 PM No comments: