Long-time readers will recognize the title of this post, as we have discussed the importance of collaboration here before.  A railroad of the complexity of the Onondaga Cutoff would simply not be anywhere close to this operational, let alone with scenery, without help from trusted friends who are skilled modelers and technicians themselves.

As an illustration, this month I was fortunate to be part of several collaborations with the local group of layout owners.  First off was an evening weathering with David Olesen, whose 1986 CSX layout following the former C&O main line over Allegheny Summit is coming along.  He asked to see how I weather locomotives, and brought a few of his new purchases to be our subjects. 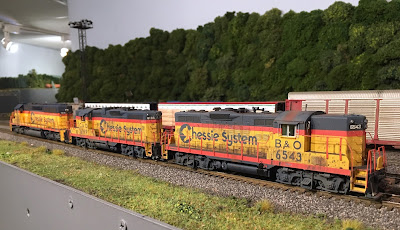 Alongside David, I weathered my recent purchase of a CN C40-8M, a fabulous model by Rapido Trains.  Rapido, in my view, is really coming on strong with excellent models of critical locomotives and cars that modelers have been asking about for many years. 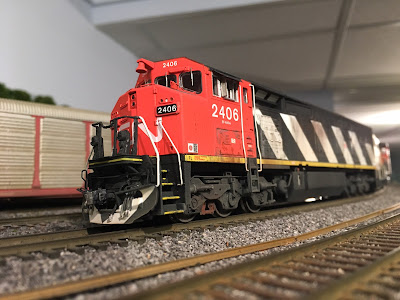 A few weeks later, I accepted an invite from Tom Schmieder, who is working to construct a large and intricate operational layout based on the DL&W's New Jersey lines west of Port Morris in the early 1950's.  He had a group of accomplished modelers there, including Perry Squier, Jerry Dziedzic, and Tony Koester and it was a pleasure to work alongside them.  Bob Bahrs, an expert on DL&W operations in NJ, was there to lend a hand as well.  We had some discussions about decisions Tom was facing, and I think the consensus as usual led to the best construction going forward. 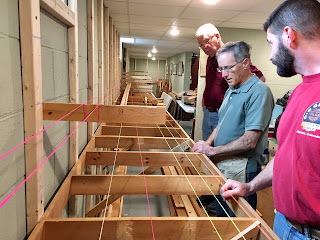 While just at the benchwork stage, this railroad is going to be something else once it is working.  Our region has needed a Lackawanna operation for some time and this will be it! 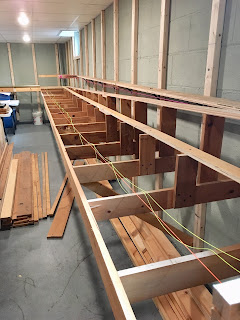 Finally, just a few days after that session I was able to spend some time on Jerry Dziedzic's NYS&W layout, where we modified the approaches to a bridge on his railroad to more accurately reflect the prototype. 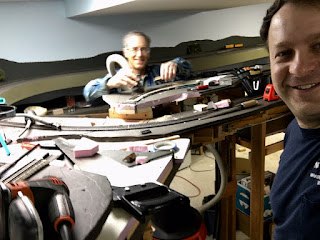 Pardon the grab shot, but it illustrates the point I am making: collaboration is possible in many ways, and all of them can be fun as well as productive.  It may sound intimidating, but I would argue the benefits outweigh the costs by quite a margin.  There are a lot of subject experts in the hobby:  why not let experts be experts, and trust them to assist in your vision?

I have a feeling you won't be disappointed!