Tonight, I'm home with a hurricane pouring rain down outdoors.  So, I finally got the camera out and made some images for you of the newly-finished track for the shortline, including a chase over the 'full' route from Euclid Yard up to Onondaga. 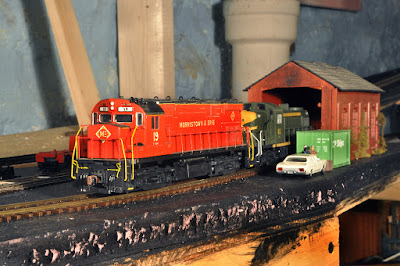 We begin at the Euclid engine house where our crew has started up the 19 and the recently-repainted 81.  The crew boards and lines the switches into the yard to put their interchange train together, which today is just 3 freshly-rebuilt cars from Central Car Repair. 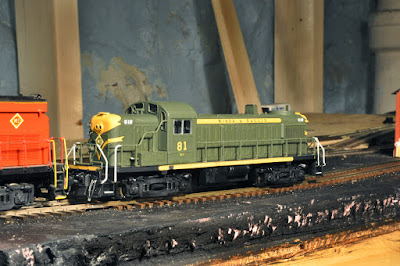 As the lashup rumbles out of the house, we get our first good view of the 81 - the M&E ownership decided on a CN-inspired paint job for this ex-SAL RS-3.  81 will lead the run up to the interchange today. 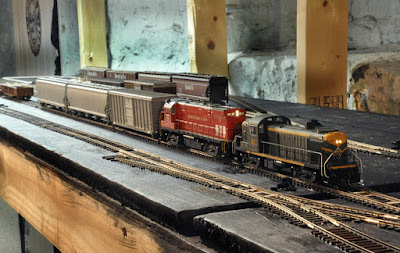 It doesn't take long to get out to the storage tracks in Euclid Yard, and once they make the pickup, the crew does the brake test and heads out of town to the north. 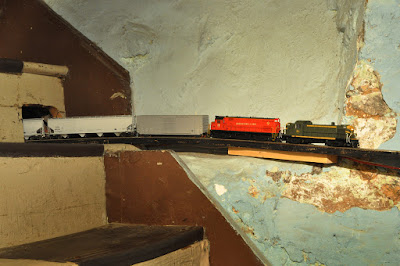 We have a chance to scoot ahead to catch the train coming out of Smirnoff Tunnel, one of several summits on the way to the interchange.  The train has crested that grade here and is coasting downhill towards the lowest point on the M&E, Skaneateles Creek. 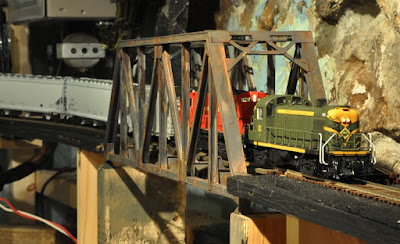 The two Alcos rumble out across the big thru-truss over Skaneatles Creek, coming out into the sunlight.  The engineer will throttle up now for the climb up Clarence Hill. 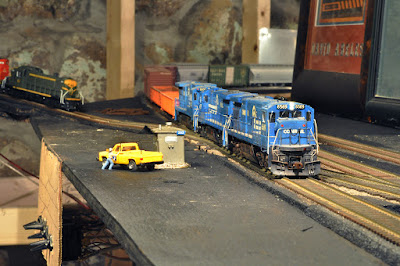 As is often the case upon arriving at the interchange, M&E this morning is holding for mainline traffic to clear before they can make their move across the mainline to interchange.  Conrail train TOSE, with a C30-7A/C36-7/C39-8 lashup, roars east on Track 2. 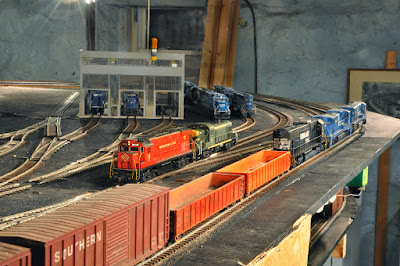 M&E spends some time setting their train out, and then pulls to the east end to make their move back towards home.  Meanwhile, TOSE had also stopped to drop and add locomotives.  C36-7 6639 had to be cut out, and NS SD70 2537 was added in its place.  Here we see M&E 19 leading the 81 back west through CP 280 on the North Runner while TOSE leans into the big turn east of the yard.

What a fun way to spend a night during a hurricane!

Email ThisBlogThis!Share to TwitterShare to FacebookShare to Pinterest
Labels: M&E

Last night, the first train ran the length of the shortline - M&E 19, an Alco C424, led a flatcar and gondola 'work train' to the yard to 'assist in the clean up from construction.'  Actually it was just an excuse to test things out a bit, and all went pretty well!

As with other parts of the layout, the industrial siding alignment is not going to be finalized until I have assembled all the rail-served structures, which will take some months.  In the mean time, I am using mock-ups and temporarily located tracks so that operations can begin.