One of the more enjoyable parts of modeling an operation in a prototypical manner is that there is a natural variety built in, so long as we pay attention to the prototype.  For the Onondaga Cutoff, one of the better ways to do that is through modeling some of the maintenance practices followed by Conrail's track and "B&B" (Bridges & Buildings) gangs. 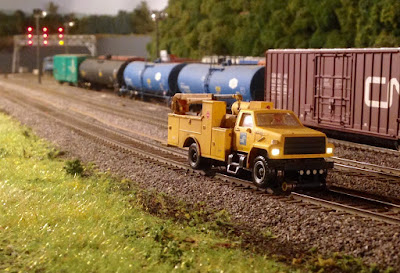 Here, we have Track Car T-5156 moving down Track 2 between CP282, in the background, and CP280 out of the photo to the right.  This is representing a track inspection, which by the 1990's was carried out in specially designed 'Hi-Rail' vehicles - essentially vehicles with standard frames and cabs, specially fitted bodies, and custom retractable railroad-wheel systems that allow the truck to drive on the rails.  In HO scale, motorized models are made by Bachmann, and one has been detailed and weathered for use during Operating Sessions now and again to represent prototype maintenance practices.

In each case, the driver of the track car will contact the dispatcher to copy a 'Form D' - a document that formally gives control of a segment of track to the driver.  The dispatcher will then mark that track out of service, and must route any trains around the work area.  It adds quite a bit of spice to an operating session!

This hobby allows modelers an opportunity to learn about all sorts of interesting topics.  Certainly there are the basics regarding hand tools, power tools, basic construction, electrical wiring and circuit construction, lighting, radio control, and painting.  Layout construction requires those basics.  Further, to get the point of construction, a modeler has researched all sorts of historical documents as well as prototype history and model availability.

We can take this a step further, learning about operating systems and various planning endeavors.  Currently, I am planning the spacial organization of a significant suburban town, including roadways, buildings, lighting, etc.  I started with a sketch of the available 'real estate' as well as photos from small-town 'downtown' districts in Central New York, and came up with a working diagram of the general set-up of the town.  This doesn't need to be to scale - this sketch serves as a template for ideas, not as an engineering document. 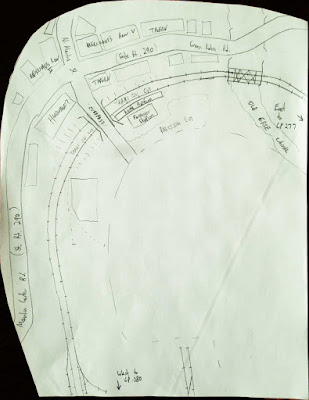 The key here is plausibility - everything about this project needs to result in a scene that will be reminiscent of life in Central New York, an area defined by the winter season, and constructed in an era when Syracuse was the "Salt City" and the Erie Canal was new, exciting, and vastly profitable.  My version of Fayetteville, NY, is considerably more developed than the prototype, because my version has the Onondaga Cutoff which would have added a substantial amount of capital and population as compared to the small town that it actually is.

Therefore, the next step was to visit and photograph other towns in Central New York that are closer to what my version of Fayetteville would be, towns like Skaneateles, Marcellus, and Cazenovia.  These were towns that had railroads in the era when they were growing, and therefore would be good prototypes for my Fayetteville.  Google Earth is also very helpful here.  Note the architectural features, colors, and layout of these main street commercial rows:

The next steps are to select some kits available on the market to represent a slice of 'downtown' and to paint and detail those kits to suggest a scene like these.

The railroad becomes almost secondary in projects like this - what we are doing is sub-urban planning, in order to create a supporting scene around the railroad that makes the whole layout more plausible.  How's that for 'Model Railroading?'  This is a hobby where it is very difficult to run out of things to think about.