As the grade crossing installation project continues, we now see some of the final character of the installation come through. Once the Sculptamold is cured, I use my brown/gray latex paint base coat, and immediately follow with my static grass application.   Here, the grass was installed in the back, with paint going in up front.  I always work back-to-front if possible. 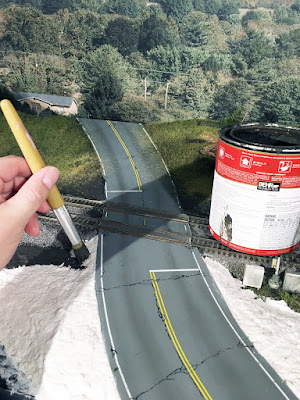 Once the paint is in place, it's static grass time.  I don't worry about the messiness here, as once the paint cures a quick pass with a vacuum with a filter on the nozzle will remove any grass that is not secure. 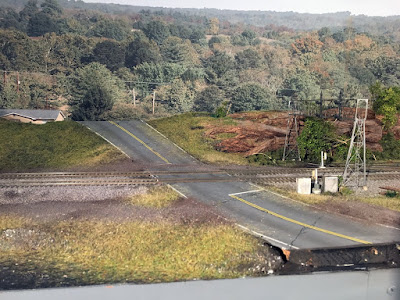 While that cured I added more Sculptamold to the end, and fitted in a piece of scrap masonite to blend the new road into the fascia. 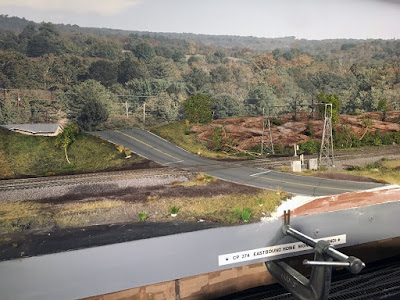 A few grassy tufts were glued in place along the shoulders of the road, and shoulder access areas were glued with isopropyl alcohol and diluted white glue.  This would, of course, be a great place to railfan!  Everything was allowed to dry overnight. The next night, I used the vacuum to remove all loose grass, and the results really are coming together! 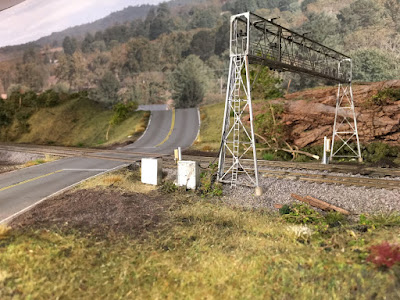 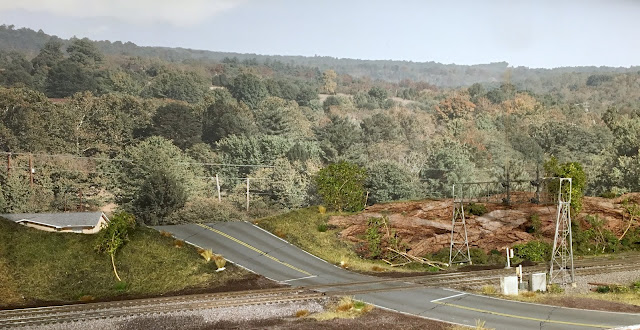 This is really starting to look like Onondaga County!  The sharp angle of the roadway will be hidden somewhat by new large trees, softening the transition to the wall behind.

While the plan here is for a fully-automated grade crossing with lights and gates, for now I installed simple crossbucks to protect the intersection.  A police officer will be close by to make sure drivers slow down. 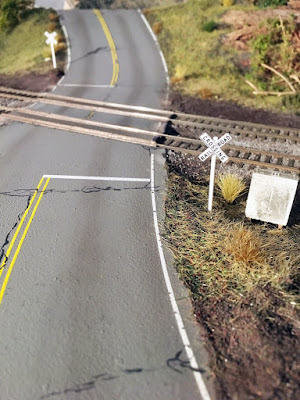 It's been a busy month here, but this is major progress and a scene that I am enjoying already.  Once the automated gates are in, it's going to be really spectacular, but for now we are moving in the right direction.

Where the Road Meets the Rails

In all of modern railroading, there is no place more familiar to the general public than the grade crossing.  Most everyone is familiar with them, in some facet, and for the vast majority of the American public a grade crossing is the only interface between a person and the railroad.

While most modelers pursue layouts set in a time when railroads were far more populated and far more visible to the public, that is not the case for us that model the 1980's and later.  For us more modern modelers, the towers, local stations, passenger trains, freight houses, gatekeepers, cabooses, and clerks are mostly all gone.   What is left for the public to experience?   Grade crossings.  For today's kids, the same is true.  There may be more trains than in 1990, but odds are if young railfans  sit trackside it is close to a grade crossing. It follows then that the Onondaga Cutoff needs a grade crossing with a public road.

Basics - where should we put it?   Well, that's a big challenge for the OC.  Much of the track is routinely blocked by trains while they work at Onondaga Yard, a situation the prototype would have avoided.  So, the crossing will need to be in a spot unlikely to be blocked by stopped trains.  That leaves us with only a few to choose from.  The best was just outside CP 277, and this also mimics similar setups at the actual CP 308 near Weedsport, NY.

The road will need to slope up behind the tracks, so as to climb the view block for the hidden trackage west of CP 282.  Scenery will help to ease the eye and make the scene more convincing.

My recent ballasting effort cured and is now in place, and it's time to embark on installing the crossing. 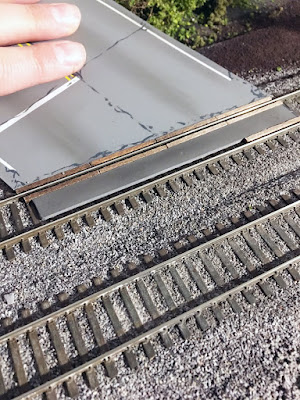 Once again, Jason W. offered his professional-grade help with the roadway, like he did with the Interstate 481 construction last year.  He uses thick sheet styrene as a base for his asphalt, which he measured on site and cut to fit at home.  He used paint and decals to capture the look of the worn asphalt.  The effect is convincing.

I had done some research from photos online as well as my own photos of the Chicago Line in 1995, and Conrail's method for most paved grade crossings was to use railroad ties bolted to the track ties, mounted parallel to the rails.  This left a gap on each side of the rail, which helps to keep the asphalt intact longer than if the pavement extends right to the rail itself (which moves considerably under high-speed, high-tonnage traffic).  I stained up a bunch of ties from Northeastern Scale Lumber to use for that purpose, and secured them with Walthers 'Goo' adhesive. 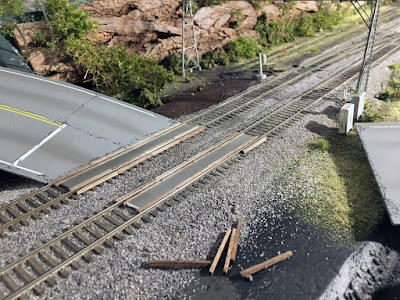 That was allowed to dry overnight, and then it was time to fit in the styrene asphalt pieces from Jason.  Some minor filing was needed.  I made sure to leave plenty of space for the flanges of passing equipment, and checked and re-checked this before finalizing.  The roadway was allowed to dry overnight in place, weighted to ensure good adhesion, and then it was time to fill in around it. 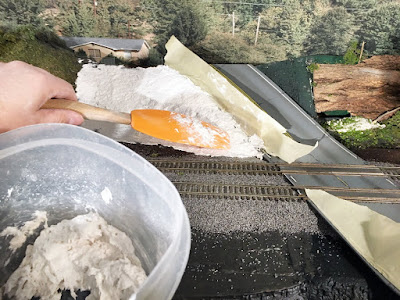 I favor Sculptamold for this purpose:  it is far more easy to work, and dries lighter than regular plaster due to the infusion of fibers into the mix.  It allows for smooth transitions which help the new items blend in.  I filled in the areas to suggest the roadway shoulders and earthwork to plausibly combine the man-made road into the man-made right-of-way, which took some experimentation.  Masking tape was used to protect the finished road, and probably would have been a good idea for the track too, although I was able to avoid too much mess. 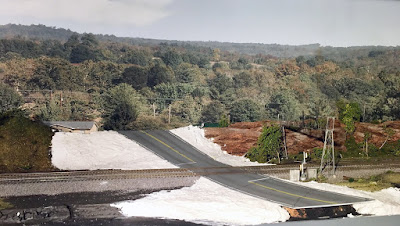 Once the plaster was in place, I removed the tape for clean up and let it set overnight.  Next time we will look at making the rough landform into part of the surrounding scenery, which will really transform the scene.

It's a busy month of modeling on the Onondaga Cutoff.  Plenty more to follow, as well!

First, all that goopy mess from last time cured up perfectly.  We're now ready for the next phase of construction, including a working grade crossing!  Lots to come soon on this but for now, here's a quick image or two of the ballast, ready for use. 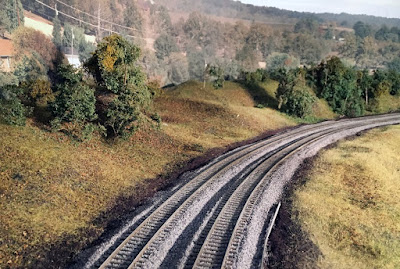 Quite a change here in a few months, after almost 10 years of having laid the roadbed and benchwork for this part of the railroad! 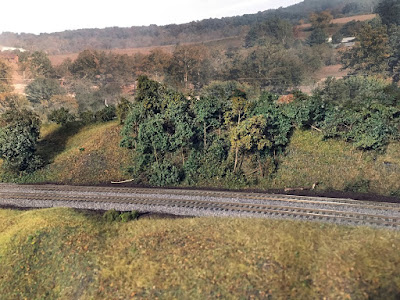 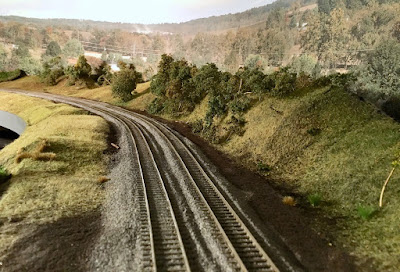 Next, we have a special treat.  Thanks to regular operator Alexander B., we have a fun presentation this time of a recent operating session, set to video.  He shot and compiled the clips, where we see Conrail trains working along the Onondaga Cutoff and in the yard at Onondaga itself.

Also fun to see is some of the actual maintenance-of-way modeling we do on the OC, and the corresponding delay that the maintenance can bring.  The Track Gang under Supervisor Lee is out in the video, causing trains to need to weave around the outages, or to wait until track becomes available.

Further, you get a taste of the extensive use the radios get in the session through the audio on this video presentation.  Thank you Alexander!

Enjoy a quick taste of operations on the Onondaga Cutoff!

Dumping glue on a perfectly working model is just not something that ever feels right.

I know, I know, it's 'just track.'  But, track is a model too, and a critical one for railroad operations.

I've done it before and will again, but when weathered track is working just fine for operating sessions it sure is disconcerting then to have to go back and ballast it.  This is not to say that the ballasting process bothers me: in fact, I enjoy it, more than other scenery element construction projects.  many modelers dread ballasting, but for me it's satisfying.  The part that is hard is dumping diluted glue over it!

We begin with the scene pre-ballast: 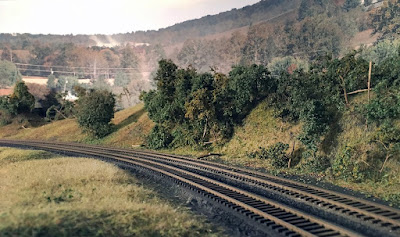 A quick vacuum job cleans any stray leaves or dust from the area before dumping ballast and the painstaking-yet-generalized process of tamping and regulating the ballast around the tracks.  First I used Arizona Rock & Mineral's black cinders (N-scale sized) for the shoulders and trackside areas, followed by Arizona Rock & Mineral 'UP-WP-Silverton' mix, a dead ringer once washed and glued for Conrail's ballast in Central New York.  The whole dump is glued together:  I do not glue the shoulders first, then the main ballast, since some mixing is prototypical anyway. 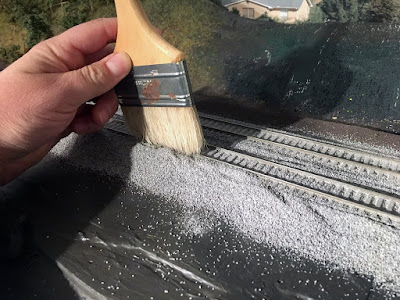 This stretch of about 8 feet of track was dumped, tamped and regulated over about one hour's time. 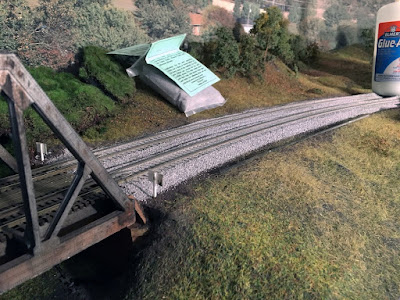 Once tamping is completed and the edges are sculpted and regulated, it's time for business.  The whole track structure is soaked with a mist of isopropyl alcohol, which washes the ballast dust down from the surface and breaks any surface tension.   This is immediately followed by the glue itself.   My mix is 1/4 part white glue, with a few tablespoons of isopropyl alcohol and a drop of dish detergent mixed in, and 3/4 water.  This is shaken and mixed to a consistent, milky fluid, which is then dribbled out of the glue container on the ballast. 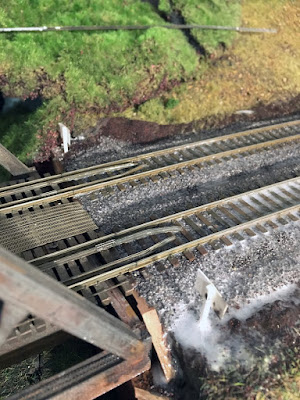 Again, this is the part that's hard to see: huge puddles of white mess all over otherwise beautiful models and scenery. 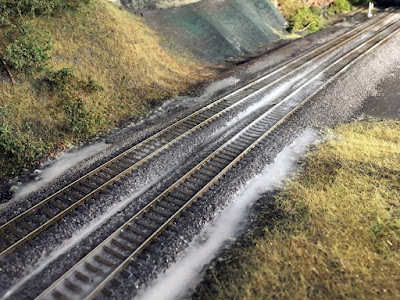 But, like so many things these days, it's the waiting that is the hardest part, and a 48-hour cure period will amazingly leave this whole mess looking just like prototype ballast - and yet it will be solidly glued in place.  Some of the wiser of my group of friends have commiserated that the early 40's are like a distilled liquor:  the first pass or two isn't even consumable, and it takes months and multiple trials to squeeze, heat and pressure something acceptable.  A few more passes and maybe it's even beautiful.  This is a good metaphor for life, and for modeling too.  Sometimes it's the pressure and the stress of life's tests that will streamline, polish, and improve the outcome.

This ballasting is in preparation for the first-ever working grade crossing on the layout.  That will be a big project - stay tuned!

More to come!  Modeling season is in full swing on the Onondaga Cutoff!


We've discussed this before on the blog, but the Onondaga Cutoff would not exist in its current state without extensive teamwork to make it happen.  Many parts of the layout and quite a bit of the rolling stock have the work of others involved.

Two recent deliveries from Lenny Harlos are case-in-point.  I am working to install some decoders and lighting in some of his locomotives, and in turn he is weathering a few of mine to a degree that I could not if I were doing it myself.  He is a gifted artist in weathering.  Here's a well-worn CR 8280, a GP38-2 with a coat of paint by 1992 that was about 15 years old.  Add to that cast iron brake shoes and hard work, and you get this: 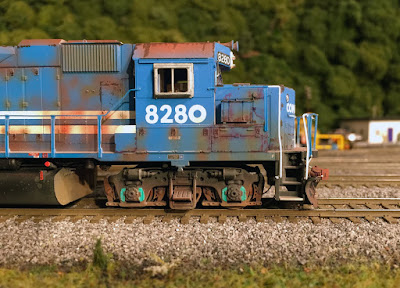 A while ago, as well, I had purchased two Bowser GMD SD40-2's for use as run-through power on the NYS&W trains that interchange with Conrail on the Onondaga Cutoff.  Here's a worn and dirty CP 5721: 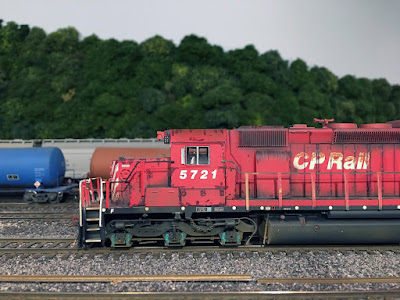 Life has its bends and turns, frustrations, and grit.  Looking at this engine gives me joy and appreciation for how great this hobby is these days:  factory-installed lighting like this, let alone the perfect colors and details, AND weathering from a master? 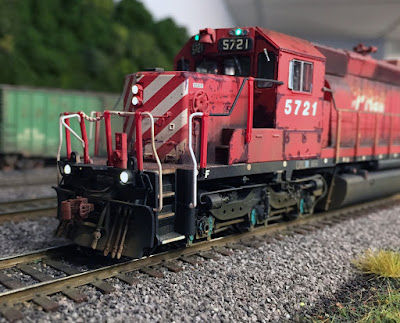 I look up to Lenny's abilities in texture, color and depth.  He can make any material look like any other - truly a master at his craft.  When you take one of his pieces and add it to the fleet, and it ends up in a scene, it speaks for itself: 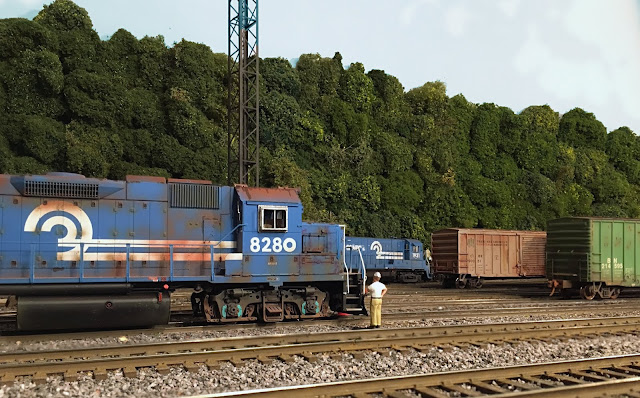 Yep, that's how that is supposed to look!  Thanks to Lenny, and teamwork in general, the hobby is more fun for everyone.