Moving forward, I have decided that some lighting changes are needed for the Onondaga Cutoff.

While I like the halogen-bulb track lighting that I installed some 6 years ago, it leaves several dark areas and also casts a decidedly yellow light on the railroad.  This is good for photography, as you have seen for several years.  However, for operations, more is needed.  Further, the late-summer and early-fall light I'm looking for also is a cooler light temperature, meaning it appears more blue.


So, I am installing LED strips behind a top valence to accomplish some new effects.  Here, the LED's are installed and are 'emitting' brightly: 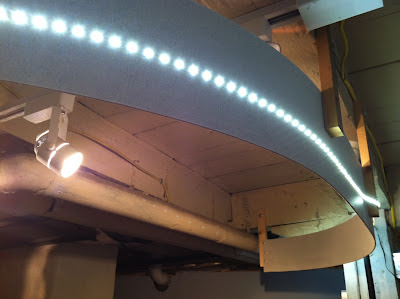 The Camillus area at Nine Mile Creek, with the new lights: 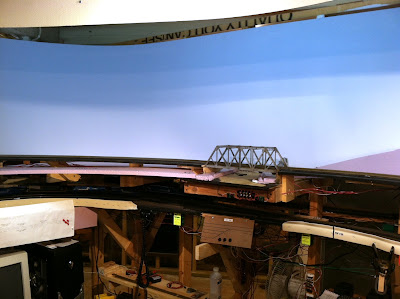 ﻿
We will see how this goes with additional scenery.  I may hang some sort of diffuser on the edge of the valence, as that will help the blue fade from bright to dark in a more even manner.  In any case I think it's a neat effect.

As the days get shorter, and the baby gets older, there will be more developments on the railroad!

Email ThisBlogThis!Share to TwitterShare to FacebookShare to Pinterest
Labels: lighting

As life rolls along towards a long-awaited fall season, a few small projects that will make a big difference are cooking on the Onondaga Cutoff.  Projects these days are the sort that allow me to finish parts of them here and there without causing long periods of not being able to run trains.  Therefore, cutting in signal detection has slowed down, but engine & car projects continue.

Our newest addition has been weathered, programmed, and adjusted, and is shown at the Onondaga Engine Terminal awaiting service, surrounded by Conrail GE's: 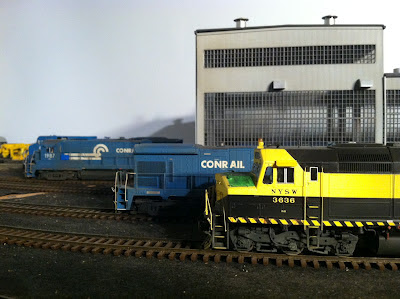 Yup, the NYS&W now will have a presence in the operations on the OC.  In the 1990's, and continuing today, the NYS&W (New York, Susquehanna & Western, or "Susie-Q" for short) has had an interchange with Conrail (and now CSX) at Syracuse, NY.  Since the OC is a fictional cut-off route around Dewitt Yard in Syracuse, ﻿I decided it was plausible that some days, the NYS&W turn that did the interchange would call at Onondaga Yard instead of Dewitt.  And so, F45 3636 was added to the roster, as well as 4002, a B40-8, and 3612, an SD45.  These will be used for train SY-1 which will come from staging east, run west to Onondaga Yard, interchange, and run back to staging.  It should add some variety to the operation.

And, I'll admit that my final push to acquire some Susie Q power was influenced by having our own Susie-Q come into our world!

Another project that I can do bit-by-bit now is to install the upper valence and fill lighting around the layout.  I am using LED-strip lighting to fill in the dark areas that are dimly lit by the track lighting; I will provide photos once I get more installed.

Now more than ever, a few minutes here and there allows me to make some small but steady progress on the railroad.  These begin to add up, and also allow me to incorporate some creativity into a schedule filled with exciting family time, but mundane chores!