In a refreshing development, we are back on track for progress on the Onondaga Cutoff!  The leaks in the plumbing system that have delayed progress on the benchwork are now repaired, including the pesky ones on the domestic water supply main.  Valves have been replaced, and the whole meter arrangement stabilized, so we should be good here for some time.

Tonight, I made some major progress.  Here is a photograph of the new landing for the stairway as viewed from the basement floor, including the supporting studs for the meter and the future big turn in the short line. 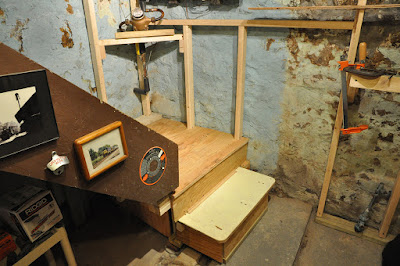 The new landing is assembled from left-over lumber from layout progress as well as a variety of plywood from other home projects - it pays to save bigger 'scraps' as they always come in useful somewhere down the line in an old home.
Next, here's a view looking down the stairway into the basement, with Clarence watching curiously if you look carefully. 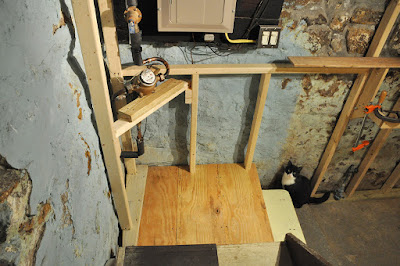 The benchwork for the shortline that was constructed previously comes in from the top right.  Now, finally, with all supporting studs in place atop a very solid landing assembly, it was time to install the last of the benchwork on the shortline - which finishes all benchwork with the lone exception of one last industry that will go in shortly.

An overall, ground-level view of the long-awaited benchwork for the Minoa & Euclid: 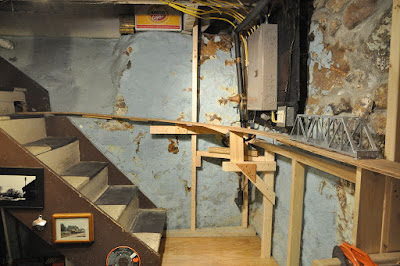 Visible here is the whole deal:  the tunnel in the stairs at top left, the grade down to Skaneateles Creek (the bridge for which sits where it will be permanently installed after weathering), and the first pier supporting the roadbed along the front wall.   Behind the camera is the west end of Onondaga Yard.

Heat and humidity outdoors is a good reason for me to keep moving on the model railroad.  Tracklaying, wiring, and the engine yard construction coming next!

Email ThisBlogThis!Share to TwitterShare to FacebookShare to Pinterest
Labels: benchwork

Well, the leaks were not quite fixed...and as always, Rick was the one to lend a hand - years of work in HVAC have made him a very competent handyman, and sure enough, as we sweated the leaking joint apart, he immediately saw the problem and taught me how to see it and repair it.

Photos coming soon to show the framework I constructed to support the meter arrangement and allow for the final benchwork on the shortline as well, all atop a new landing.

The long standing leak in the water meter assembly seems to have been addressed!  Thanks to leadership and help from a neighbor who does HVAC plumbing professionally, the water main into the house has never looked better.

My thought quickly turned to the unstable landing on the stairway that was below the meter for 60 years.  It was soft and off-level, and my thought was that there was significant rot beneath the surface.  I was right.  Since the new shortline will need to have several supports on the landing, I decided replacing the landing and stabilizing the bottom of the staircase was in order. 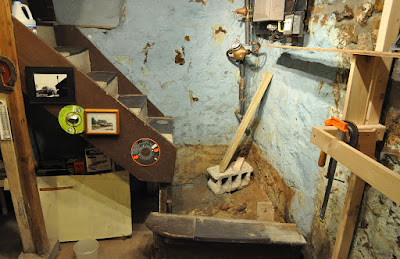 So, I demolished the landing on Memorial Day, and cleaned up the mess while being very careful to avoid damaging the meter assembly (seen on the wall in this view).  Also visible here are the shortline coming in from the right, and also if you look carefully, the benchwork for the stair-tunnel on the 5th step at the upper left.

I put several hours in to engineering a new landing on an uneven concrete floor, including brick risers to keep the 'green' lumber out of the moisture as much as possible.  The landing is now in.  Tonight I will construct the final step, install finishing trim, and attach the staircase to the landing.

All of this is in the name of 'basement projects' before the layout, which has included replacing all galvanized water pipes, replumbing the entire downstairs bathroom, installing a new boiler, installing a new oil tank...

Finally, an action shot for you, as I switched Onondaga Yard with CR 2795 while the mortar set beneath the brick risers for the new landing... 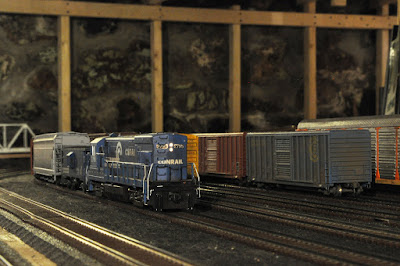