Well, the first two operating sessions are now on the books for the Onondaga Cutoff - both were great successes, and a lot of fun.  Ops sessions have taught me a lot about the railroad that I would not have realized myself, and so there are some things that need to be changed as we go forward.  Thankfully, though, they are minor, and the general design of the railroad works very well for heavy-duty mainline operation.

More on that later.  There has also been some good construction progress on the railroad - first, the final benchwork, trackwork, and wiring of track was completed with the installation of the major online industry on the main line.  Iroquois Paper is now operational, with space-holder structures coming soon to represent the big paperboard plant. 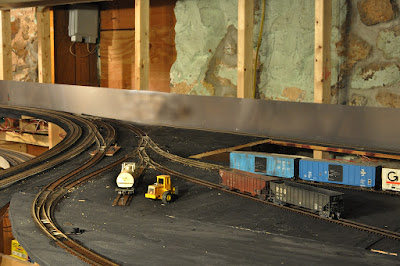 The main line is off to the left, and you can see the lead, which comes into the runaround immediately.  The switching lead comes through the curved turnout in the foreground and runs out about 8 car lengths to allow for building the outbound turn from Onondaga Yard.  Likewise, an east lead does the same thing to allow the turn to switch the industrial tracks on the right.  Iroquois will receive loads of clay slurry, paper scraps, and coal (for the onsite power plant), and ship out loads of finished cardboard and paperboard.

Another big development is the installation of masonite backdrops, seen here at CP 282 - not much to say about it except that it dramatically makes the railroad seem longer, since you can no longer see across the room! 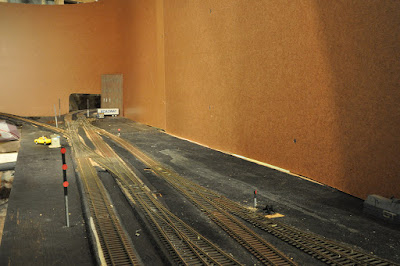 This will eventually be painted as distant horizon and sky, which will be a major improvement.  But for now, especially for operating sessions, it is a good view block and really helps to give the sense that the railroad goes somewhere.

Also visible above is a tool I installed to assist with operations after some suggestions that came during the firs operating session - a manual block system.  During the first session, crews had trouble seeing where interlockings started and stopped, and were unsure about where to stop trains when the dispatcher ordered different moves.  Therefore, I fabricated signal masts from leftover sprues, colored paper, and paint; now each interlocking is 'signaled' which allows the dispatcher, during ops sessions, to route trains by signal indication.  While fully manual, it does allow crews to easily identify the limits of an interlocking, and so far has been beneficial.

Another exciting process has been the set-up of some new power for the Onondaga Cutoff - among others, freshly delivered to the railroad is SD60I 5544, with a builder's date of 1994.  It and a sister will be among the newest power modeled on the railroad. 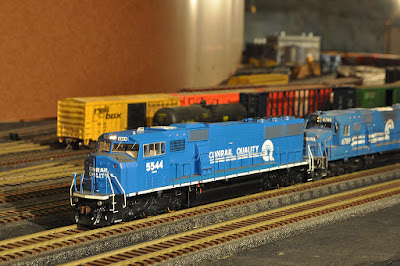 And a shot showing the locomotive leading train SEIN: 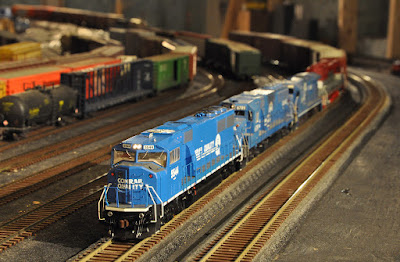 New power is something everyone can get excited about!  I like how the 'clean' paint on 5544 contrasts with the weathering on 6789 and my other Conrail power.

Now, we're entering the holiday season, which is a busy time for all - but as winter comes, the time spent on the model railroad will increase.  Plenty more to come soon!