I arrived home from Springfield from the big Amherst Society meet to a surprise - longtime friend and companion J. Alex Lang had provided me an updated banner photo for the blog!   Alex was an early inspiration for me with photography and Conrail knowledge in general, along with his sincerity and ambition.  He's got a great eye for aesthetics - an expert eye - and he delivered better than I could on this one.

Next time you open the blog, you'll be in for a treat.  Thanks, Alex!

A Weekend of Operations

Operating trains on the Onondaga Cutoff is one of the highlights of the railroad.  The weekend of January 21 and 22 2023 was one where we not only hosted a session, but I was able to attend another one, too.
The OC session modeled a period from about 3pm to about 3 am on a typical Saturday - September 17 1994.  Thanks to Mark Sullivan and Rich Wisneski, we have photos of the prep as well as some from the session. 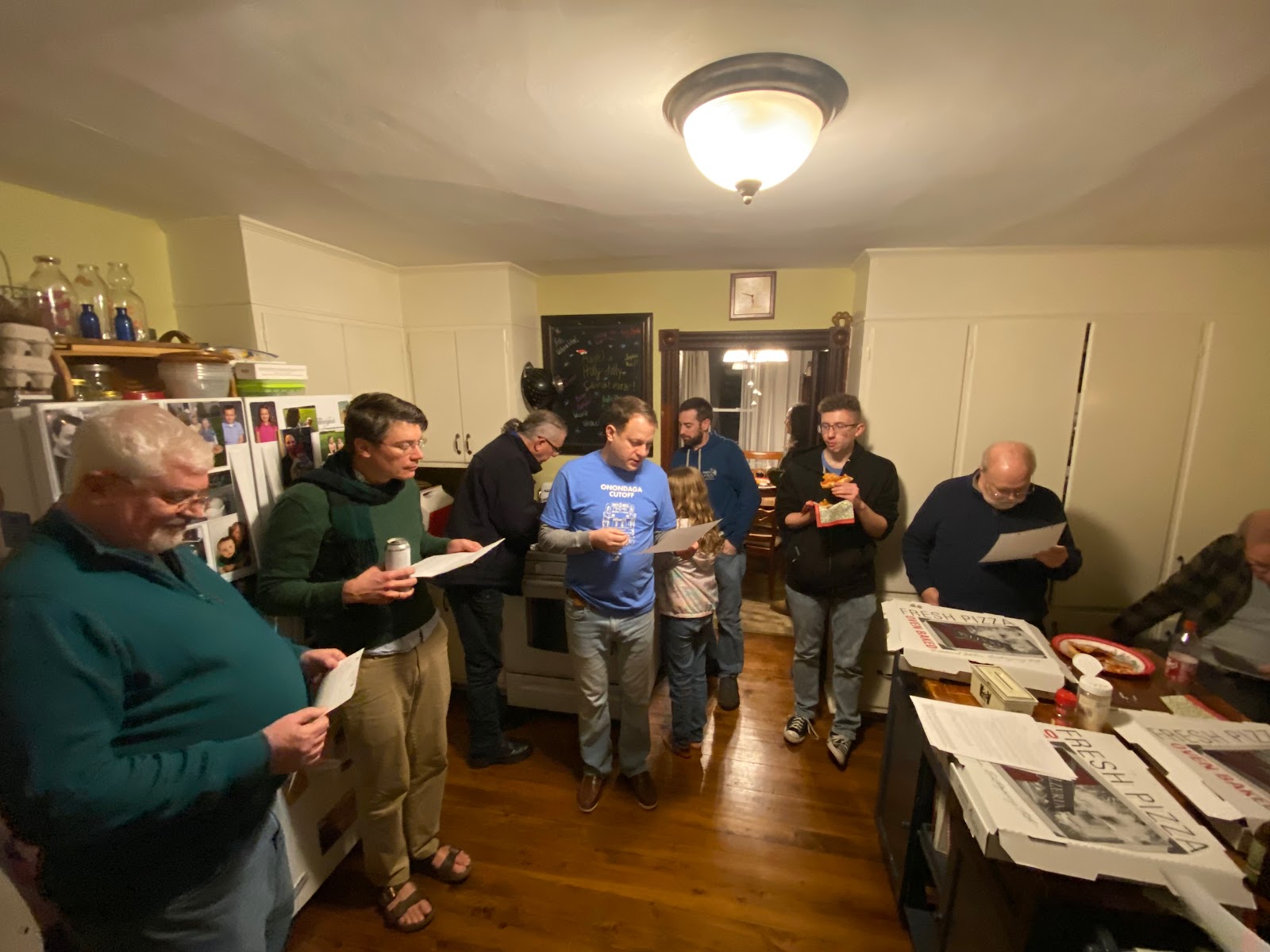 Here we are enjoying pizza for supper and doing the safety briefing ahead of running trains.  While the safety briefing may sound heavy-handed, it's important to note emergency exits and fire extinguisher locations for people unfamiliar with the house.  It's also a time to build some of the atmosphere ahead of the session:  what was the temperature on September 17, 1994?  What current events get us in a mindset of the 90's?  What was the price of gasoline?  For our operations to work, our minds need to travel in time a bit as well. 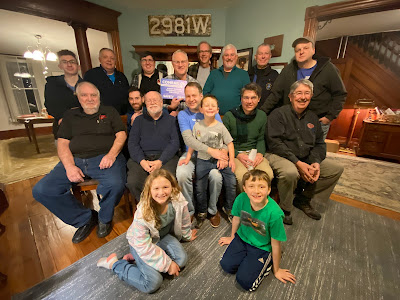 Rich always likes to have a photo of the participants, and this time the group included the kids as well as a number of guests.  It takes people to make a railroad work, and we are fortunate to have a number of good ones!  This session ran into the darkness with a simulated sunset, and the fun continued.  Amtrak train #276 after its run was tied down at Island Yard. 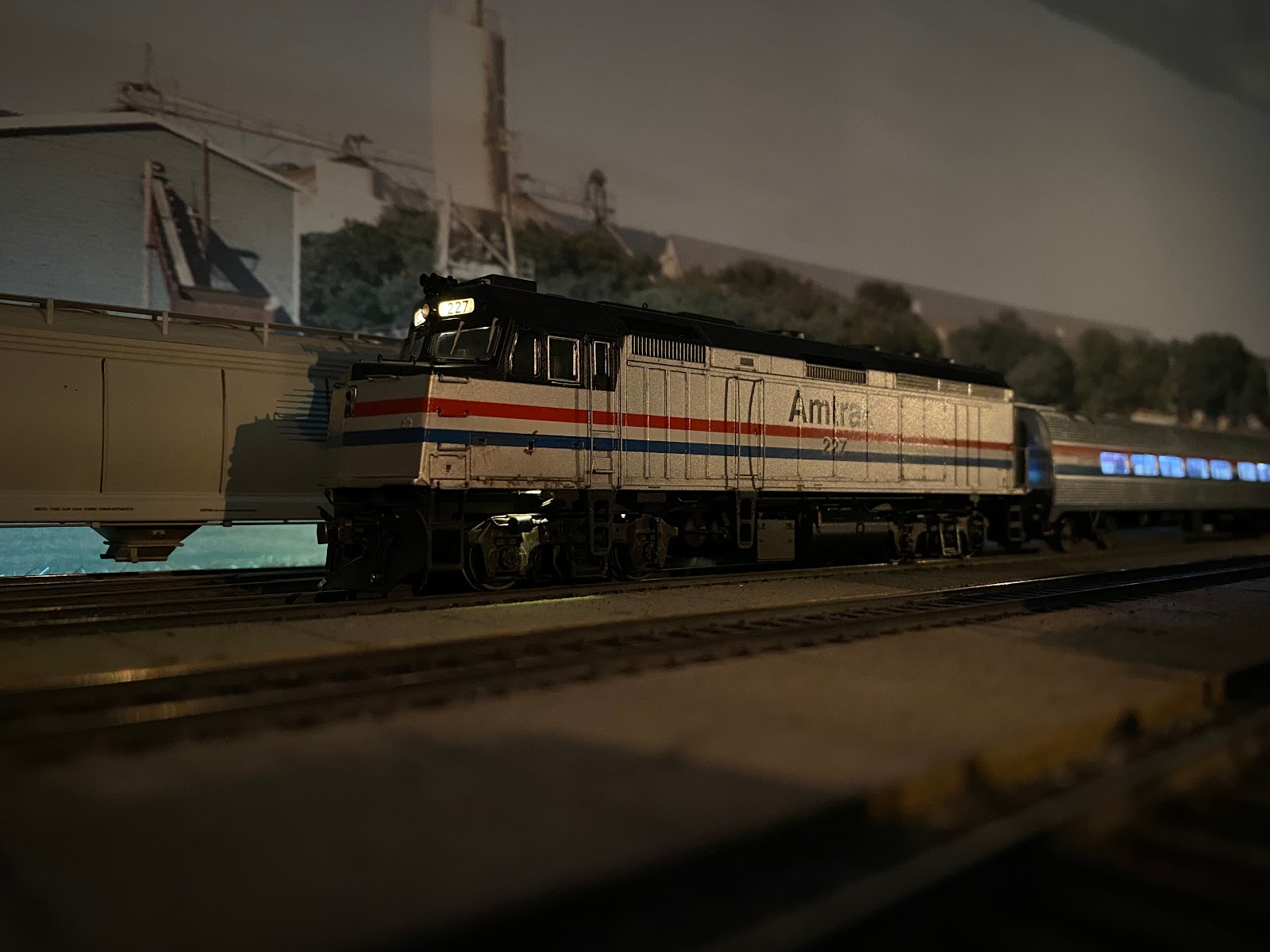 And, later, SEEL from Selkirk, NY to Elkhart, IN was working up at Onondaga Yard, highlighted by the dwarf signal at CP280. 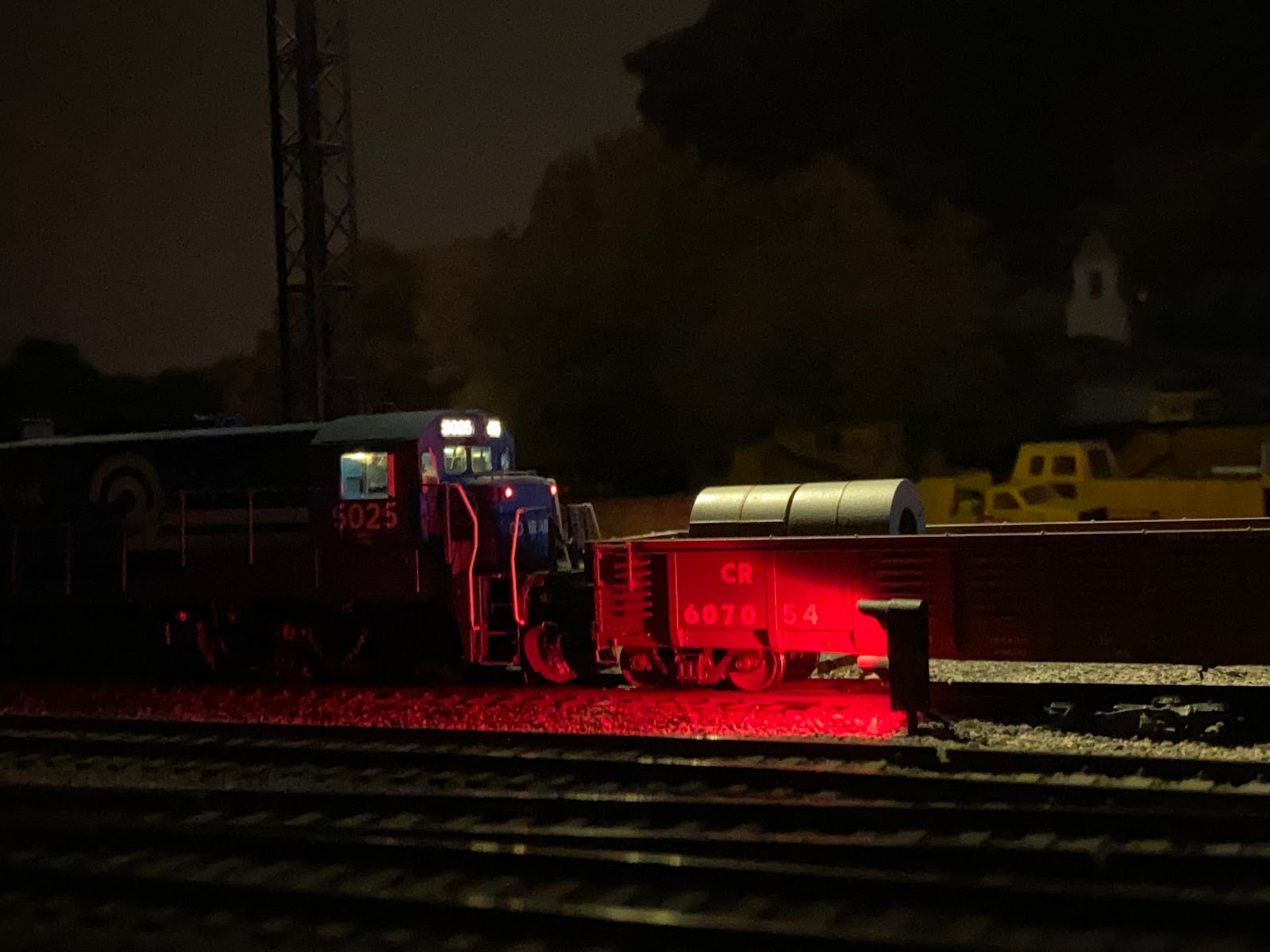 Nighttime brings a magic to the OC, and one of the best spots is the fuel pad where locomotives are serviced through the night.  Two B23-7's idle while being fueled. 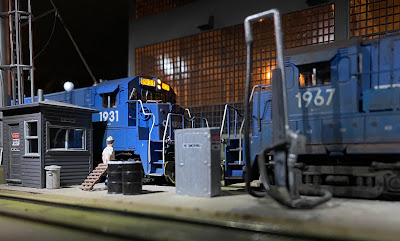 Then, Sunday, I was fortunate to be able to attend the operating session at Tony Koester's famous Nickel Plate Road layout, set in Illinois in 1954.  Tony gives his briefing before the session, with regular operator Bill Jamboor sitting behind him. 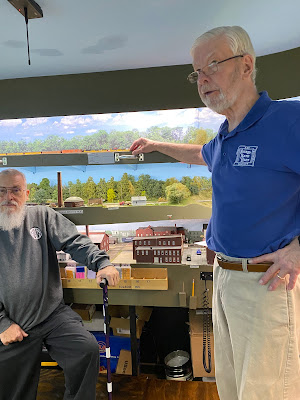 While operations isn't the way most modelers choose to participate in the hobby, it is one of the niches that helps set our hobby apart from other modeling hobbies.  Instead of our models sitting on a shelf, in many cases our hard work can be displayed in motion, as intended.  Operations models not just equipment or structures, but the dynamic environments where the prototypes run and - most critically - the coordination with others to accomplish a task.  Operations takes us from train models to modeling railroading.
On another positive note, see you in Springfield on Saturday and Sunday - if you're at the big Amherst Society show this year, January 28 & 29, stop over at introduce yourself at the Onondaga Cutoff table:  Better Living Center Section 4, Table L!
Posted by RGDave at 12:09 AM No comments:

A Table at Springfield!

Welcome to 2023, a new year full of opportunities and more than that, hope.  There is a lot swirling around in the air these days, including an increasing awareness that the most limited commodity these days really is time.  Hard work and persistence allows the ability to earn more money, but time marches on, and it is irreplaceable.  It is important to make moments count.

Last year something I wished we had done with the Onondaga Cutoff was to attend the big Amherst Model Railroad Society train show at Springfield, Massachusetts, always the last weekend of January each year.  This year, thanks to the A Modelerslife Podcast, the OC will have its OWN TABLE at the massive show - one of the former City Classics Inc tables.

Come see us at the Better Living Center, Section 4, Table L!  Look for our flag on the wall behind the table: 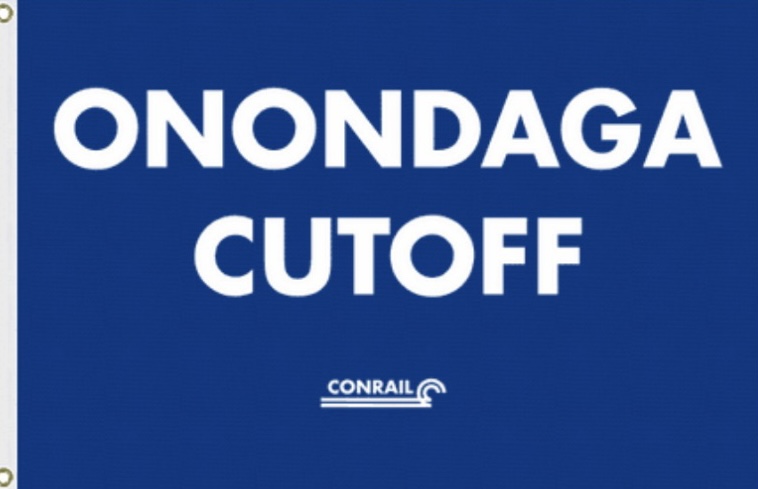 It's a great show, with a full floor layout available online here:  https://www.railroadhobbyshow.com/pdf-maps.php   My plan is to have the table as a home base and be there to meet and greet fans of the OC, old friends and new from 12-3p on Saturday, and from 12-2p on Sunday.

More to come soon, but prep is underway and we are excited to see you there!

The holidays are always a time of year when time warps and wraps itself around experience in a way that seems variable.  Nights are long but short, in a way; days are short but can seem quite long.  And by mid-December we are always wishing for an extra hour or two.
This year Kristen and I are making a deliberate, persistent project out of making time to sit and enjoy.  And one of the things that is a joy to watch is the kids this year, who are as enthusiastic as ever and now are old enough to help with decorating and preparations! 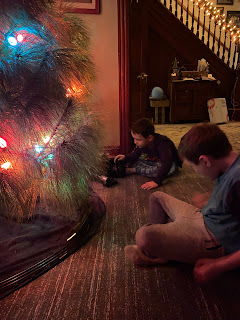 Teddy and Pete worked hard this year to get the Lionel O gauge trains around the tree, and have embraced it as theirs.  There is indeed a magic to this, and to trains in general.  I am proud of how they treat things gently and how engaged they are with a 'real' toy - when trains win out over screen time, something good is happening. 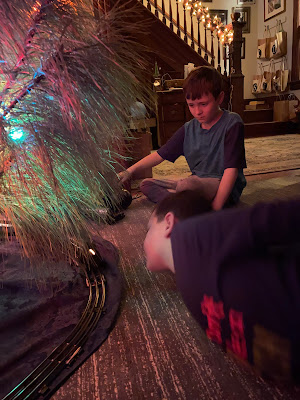 They're doing a great job sharing throttle time, too.  What a pleasure! 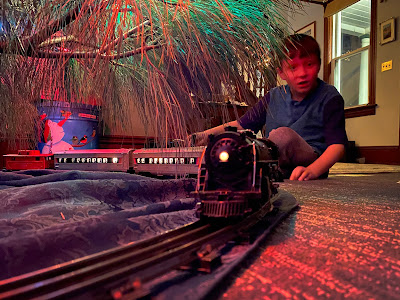 I cannot help but be excited about what this is building for them for the future.  Lately I have seen them 'operating' on their setup in the attic, and even doing some recording with their tablet of the operations complete with commentary.  I think that might be a fun thing to dress up and put on YouTube to share some of the joy with the world, as we can all use a bit more of that!

Make time to sit and ponder this season, and may you find some joy in front of you that you can appreciate too!

I was going through a pile of digital images on my phone and computer recently to decide on a few that should be printed, and came across this shot of Jack and I at the end of another session on the Onondaga Cutoff back in 2021. 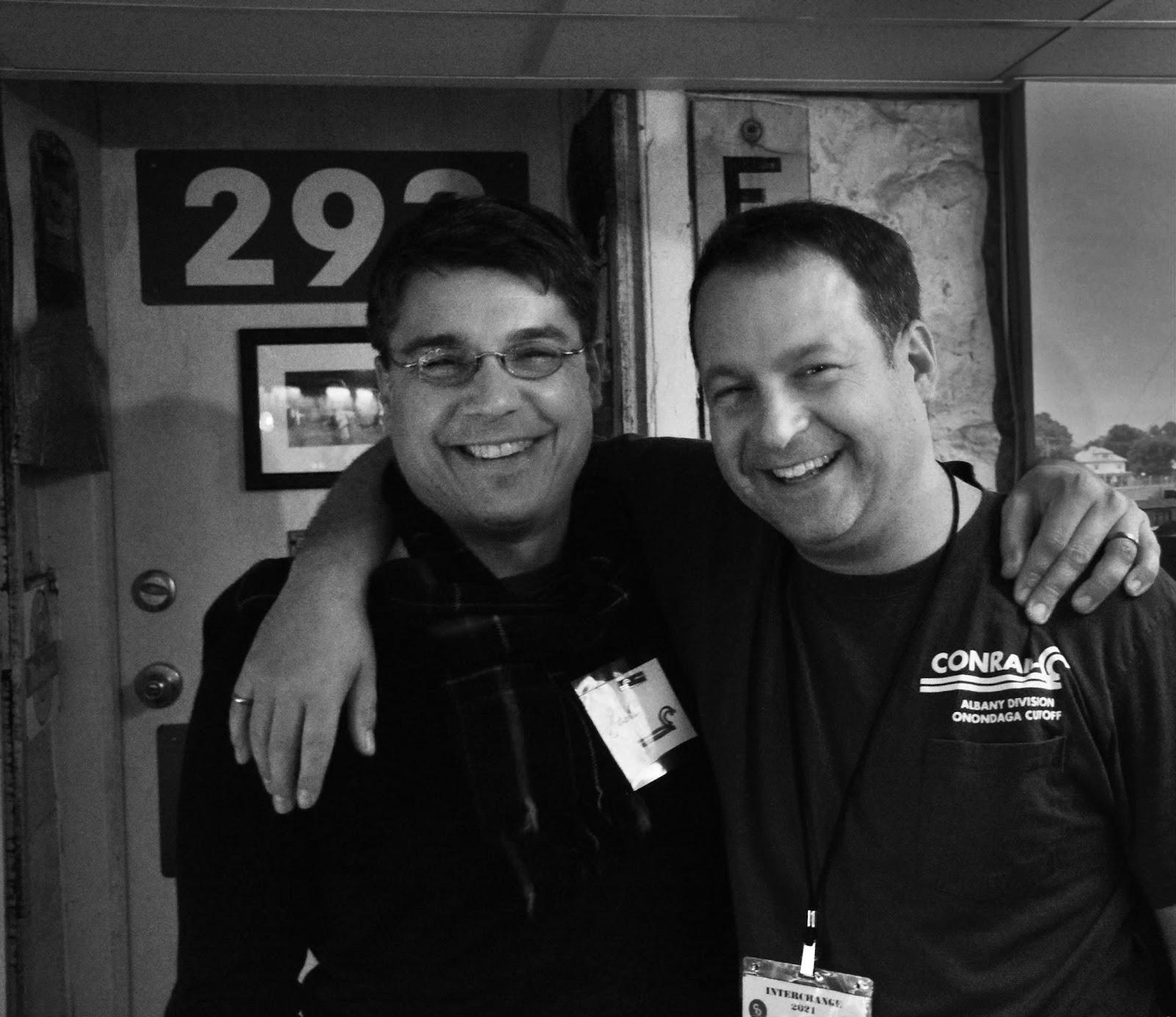 This was a snapshot, likely by Rich W., and I think it is symbolic of quite a bit in life these days.  This is a really fun image, lighthearted and full of joy, and yet it was in a long line other images and had faded from memory.  Jack and I of course go way back, as is known by most readers of this blog and fans of the OC, but since I am the one taking most of the photos there are not many that include both of us having a great time together.

Finding reminders of moments like this one bring clarity to the present moment, too, in a way that only reflection can.  Everything now is a sum of all that has been, but it's also greater than that, because it's real and full of promise.

As this year draws to its close it is important that we dig around in our collective memory for images like this.  Whether photos or videos or moments in our minds take that spot for you matters less than the fact that they exist, for all of us.  What a blessing to have such moments!  And what a privilege to be able to remember them, reflect on them, smile with them.  Enjoy your moments, and may the best be yet to come!

Travels Near and Far

October and November are some great months to be trackside, anywhere in the United States - perhaps anywhere in the Northern Hemisphere.  While model railroading is a year-round hobby, there is something about being outdoors in the fall that really calls me - colors and light change and the images we can make are otherworldly.

Even out in my favorite desert, that is the case.

Thanks to a generous invite from Mark Hemphill, noted photographer and author, I was again able to make plans to fly to Salt Lake City and spend time with him in the deserts where he made the images that first inspired me to learn more of western railroads in the early 1980's.

There's just no way to make images like this in most places of the world, and in nearly all cases you can't even make similar images anywhere else.

Making time for travels like these is difficult, and travel is never inexpensive, but the results are singularly possible only because the trip gets made.  Sometimes against considerable odds, too, but isn't that how we grow?  Nothing gets better or is made stronger through convenience or lack of effort.  Everything is possible if we take action, mindfully, methodically, steadily.  Time for reflection is needed too but make no mistake: action speaks louder than words or thoughts.

Guest Operators - Including a Special Guest

Guest operations are a great experience for both visitors and hosts alike.  The Onondaga Cutoff hosted a session as part of a group of sessions on five railroads in one weekend here in Northwestern New Jersey in October, and it was a great honor to be able to join the fun!  We worked hard to get the railroad ready - and it was worth it.

We hosted along with Perry Squier, Ted Pamprin, Jerry Dziedzic, and Tony Koester - four legendary layouts, and the OC.  I am still amazed at the good fortune of living in this same area as these railroads!

The first session Saturday was at Jerry's, and here Doug Tagsold and Dustin Jeffers work the big NJ Zinc Mill in Franklin, NJ on Jerry's NYS&W/L&HR. 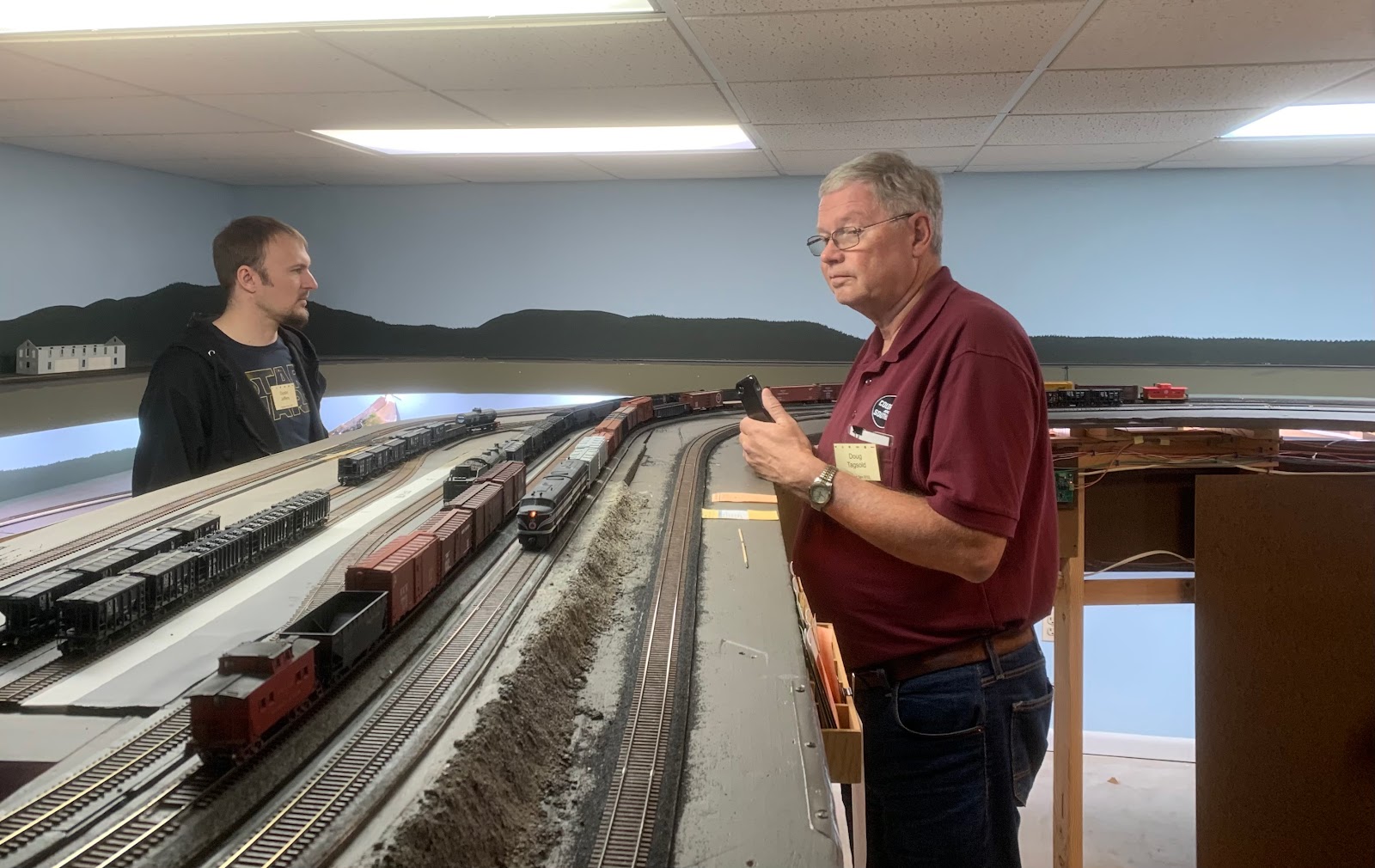 Later that afternoon, the crowd came to the OC, and we got right into it. 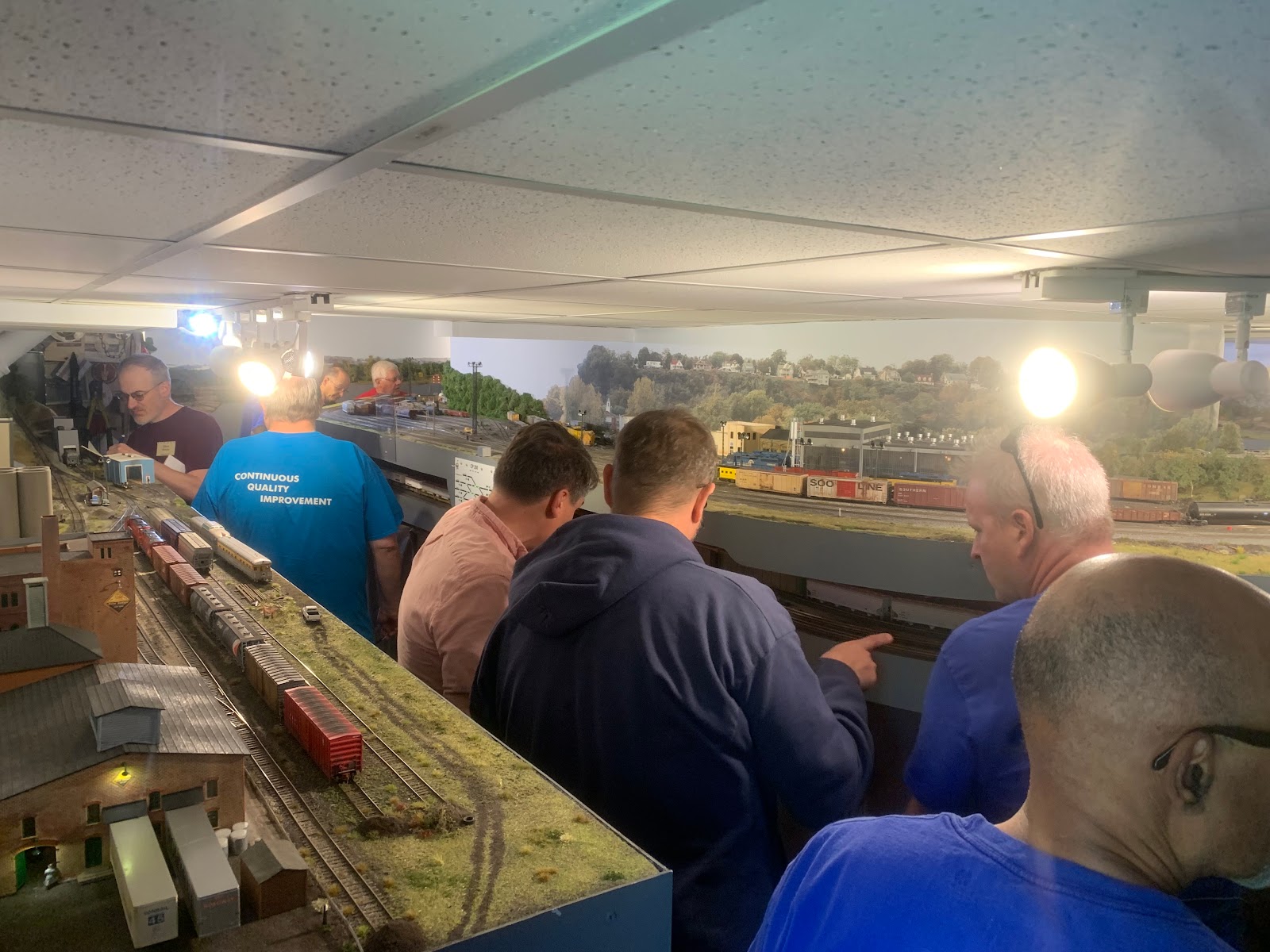 Guest sessions work best with helpers on hand who know the railroad well, regulars that can be trusted as guides for the visiting operators.  Sometimes guests jump right in and this group not only jumped in but also caught on very quickly - it was a great session! 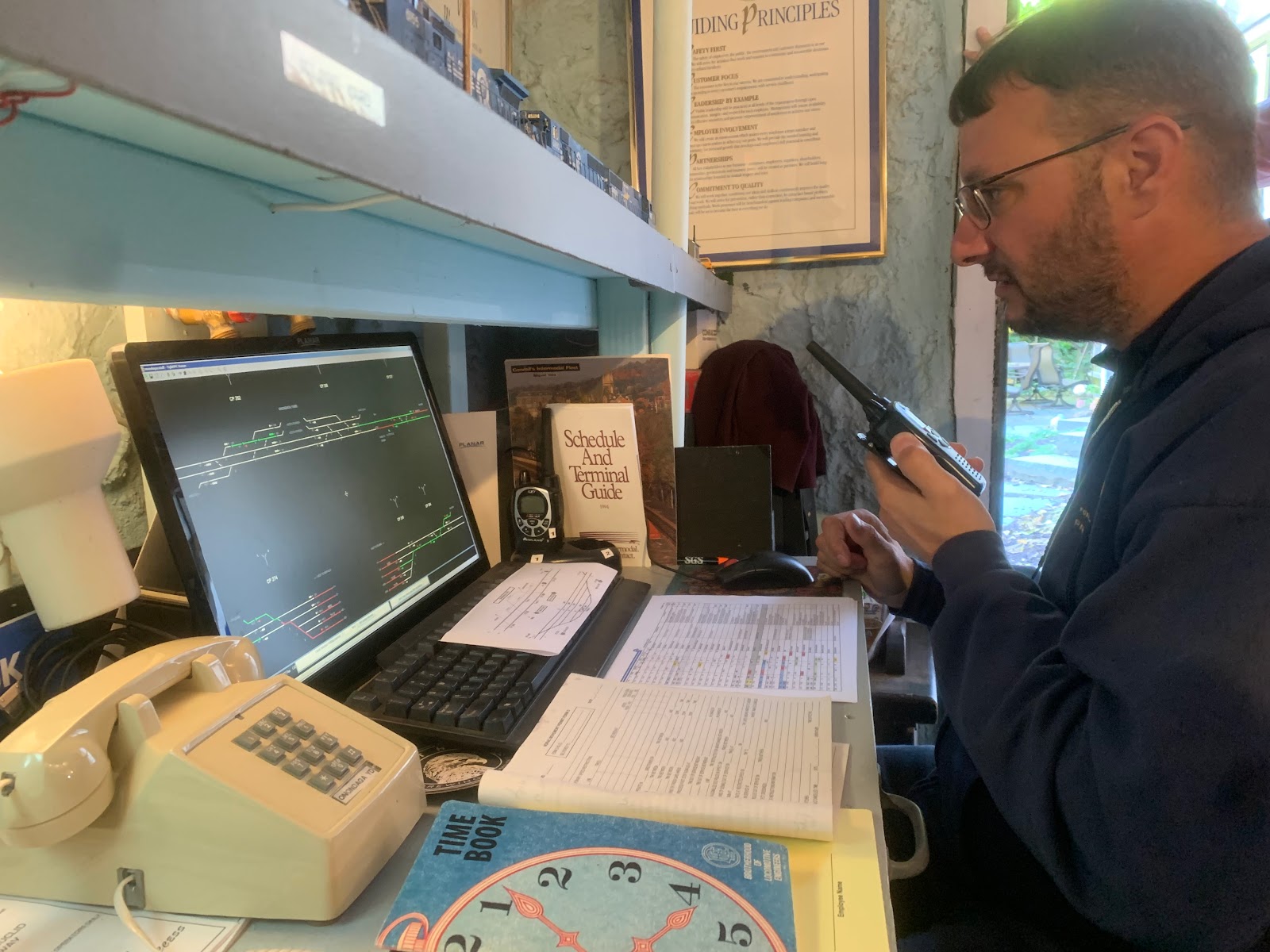 Mike Burgett, whose amazing C&O layout was a railroad on which I operated in the spring of 2022, sat in as the Conrail Mohawk Dispatcher on the OC.  He worked it well with guidance from Jack T, who as always puts a tremendous amount of effort into making sure the operating plan works and is robust enough to hold up through the typical ebbs and flows of a session.

An honored guest this time as well as Eric White, who attended with his wife and son.  Eric was recently promoted to be the Editor of Model Railroader magazine - a key role not just at Kalmbach but in the hobby in general - and he has now attended a session on the Onondaga Cutoff.  Awesome! 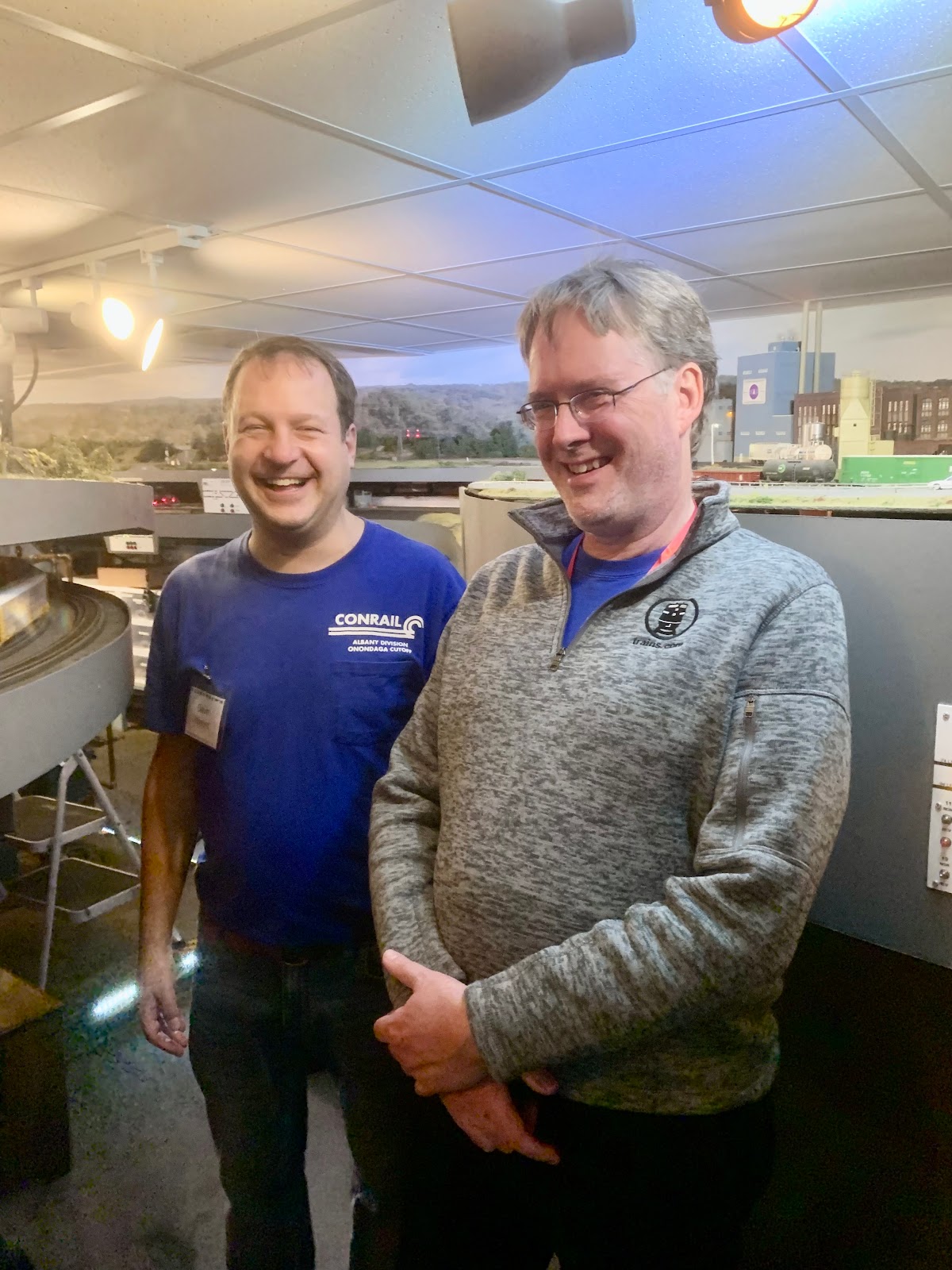 It has been a thrilling and fascinating start to the fall in 2022, and things are continuing on a rapid pace.  Maintaining balance is going to be a key not just this year but as life goes on and that is something I will explore more in future posts and creative works.  Balancing life, family, career, and an immersive hobby is a wonderful privilege and a huge responsibility at the same time.

The best for all of these is yet to come!