I am grateful for all the support that has poured out in response to the Onondaga Cutoff being featured in Railroad Model Craftsman magazine!  All of the people involved with the layout are excited to see it in print and especially given how nicely the piece turned out.  Otto Vondrak is Editor of RMC and his team really put together a nice spread that evokes the feel of the OC!

Last year, after the layout's first cover feature in Model Railroader magazine, Jack T. asked me 'Well, what do you do now?', in reference to coming off the creative high that is having a feature and cover shot on magazines of this caliber.  It was a good and thoughtful question that gave me some pause.  And the eventual reply was 'get back to operations!'   And so it was last fall, when we did just that.

This year that is more difficult and involves a different sort of lift, like so much else.  Remote operating sessions are fun but are a lot more work to set up and pull off.  They are worth it in these wild days but it's not the same as getting back to operations as we know them.   And so, keeping the fire lit, I am getting 'back to basics' and finally putting some time into some organizational items as well as layout room maintenance along with various projects with equipment. 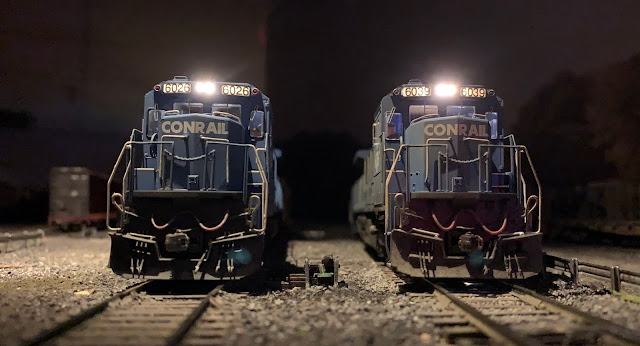 I dug right into the last of the two Dash-8 upgrades on the list, including my pair of Atlas C40-8's in Conrail livery.  These were nice models in the 1990's that by today's standards hold up provided we add a few new details and upgrades. 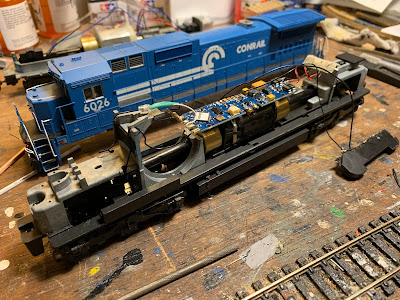 The first upgrade is to include modern DCC.  I had several Soundtraxx Tsunami 2 decoders, along with iPhone speakers and LEDs in the supply cabinet, so I modified the weights to accommodate the new decoders.  Cosmetically, I wanted up add the Conrail-style grab irons and new RS-3L air horn castings, as well as new numberboards with correct font and coloring. 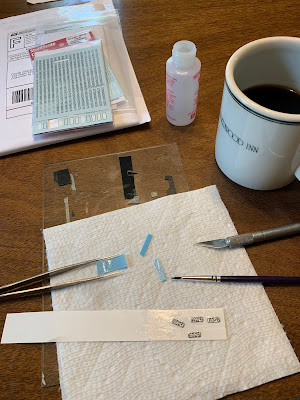 I used white styrene, painted white, and decaled with ShellScale decal set #106.  Once dried and dullcoated they were glued to their mounts with CA gel.   The result is a huge improvement on the old Atlas boards from 1990.  Best of all, since they are black on white, they light right up when installed over the stock atlas number board areas.

I also took the long-due step of cleaning and repainting the access stairs for the layout space.  Atmosphere is important to me, and I think adds to the experience of being in the room.  This is an old, old house (built around 1840) and so the steps are old and worn, but a coat of paint and new tread grips with reflective stripes add a lot.

I am fortunate to have a hobby that allows this variety of satisfying activity, and more fortunate still that I am so driven to keep it moving.  Life is a balance, and a series of choices that we make, mixed with some luck and some chaos.  It is on us to ensure that we are putting some thought and critical reflection into those choices so that they are not just happenstance, but instead are mindful decisions that create opportunity for improvement.

There are some exciting things coming soon for the Onondaga Cutoff, and we can look forward to this.  For now it's nice to settle back into making some of the changes that help make the experience better.  There is always the chance for improvement!

Posted by RGDave at 7:57 PM No comments: