After a memorable and exciting month of June on the Onondaga Cutoff, with an operating session ahead of a visit from Rapido Trains and subsequent video, July appeared to be much more quiet.  Summer usually allows for less layout time in any case, but also evenings allow for some time to catch up on projects.

Well, let's just say July found a way to balance out all the positive excitement that was around in June!

Following the fun, the layout was a bit of a mess, with trains and throttles out of position after setting things up for the video shoot.  I was flying high and excited about the upcoming video, looking forward to seeing how Rapido would present the OC.  I decided to do some video of my own to pass the time.  I didn't check the main lines first - while throttles and tools were out of place, I didn't recall any fouling the main.  I chose a big manifest train from staging and a 5-unit consist to lead it.  As it passed through the hidden trackage back behind Iroquois Paper, I heard the unmistakeable sound of something plastic hitting a concrete floor.

I went over to investigate and saw the missing throttle on the floor, and next to it something we all dread: a locomotive had hit the ground.  Trucks were off, parts all over.  As I got close to it, my stomach dropped and heart raced as I saw the cab crushed, and saw for the first time which engine it was.  This wasn't just another engine.  Nope: this was my 6577, my only proper C30-7A. 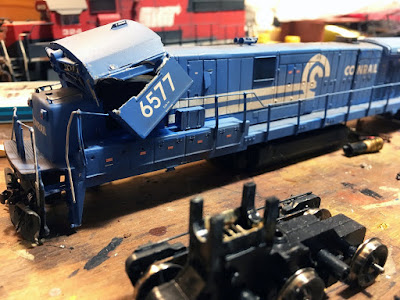 Conrail rostered 50 of these based in Selkirk, NY, and they were daily across my modeled territory.  Never available commercially except in brass, and in need of several of these, I proceeded to make my own.  Regular readers will remember that this is the one with its own blog post in December 2015.  The one I researched and kitbashed and painted and detailed over 60 hours a few years back.  Not an old blue box engine with details.  Not something used only now and again.  Now it was destroyed due to my own heady haste.  This was a huge loss for our operation and the theme of the railroad.

In checking the scene I discovered what happened: the locomotives on the train I was moving ran into the throttle, which had been left on the main track above locomotive storage tracks due to my rushing around during the Rapido video shoot .  The throttle slid off the main track, falling down and knocking 6577 -of all engines- off the railroad where it fell to the concrete floor.

As you can see, the damage was extensive.  The cab was destroyed.  Details were all over the place.  The body pieces, glued together in the kitbash, were now cracked apart once again. 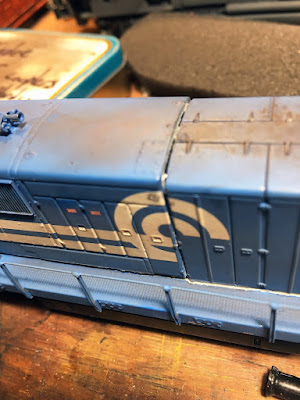 I was heartbroken.  What to do?  Well, the frame wasn't bent.  Mechanism went back together without too much hassle.  There's that.   And, after I had done this job, CMR Products developed and now offers a C30-7A shell in HO as a polyurethane casting.  While not up to modern injection-molding standard, with proper prep and painting, it would work for me.  Still though...all that time and effort...

After consulting with the guys closest to me on the OC, I started to think about rebuilding using the existing shell.  I had a spare cab for another project that would fit the bill.  Parts could be reused.  The shell could be carefully re-glued.  Inspired by what Conrail's Juniata shops had done, including rebuilds of several C30-7A's that were accident damaged, I decided to do the same. 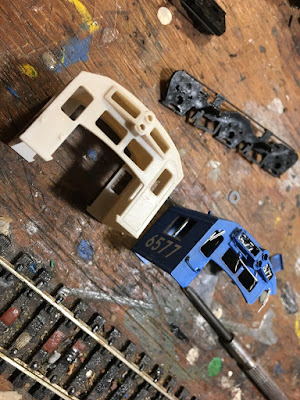 This would take some doing.  I cleaned up the replacement cab, modified the headlight and number board housings based on the old cab, and removed the details from the crushed cab for installation on the new cab.  I scrachbuilt flag holders and rain gutters from styrene and glued them in place. 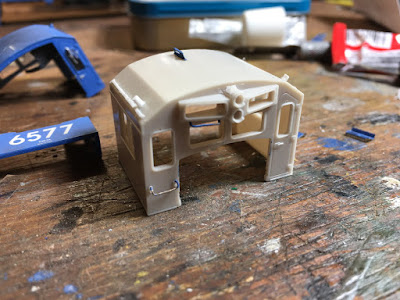 It still is upsetting to see that perfect decal work on the old cab here, but now there is some hope at least!  Number board holes were filled with white styrene and the cab was washed. 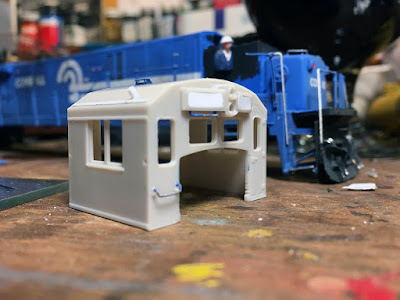 I had a can of the same ScaleCoat CR Blue I had used to paint the original model, which was fortunate.  A coat of paint now and we are getting closer.... 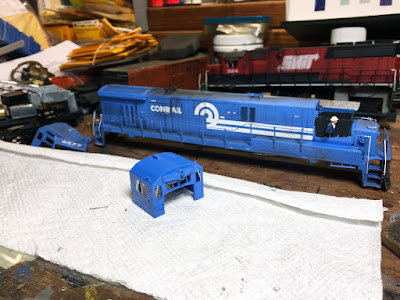 While that cured I refitted the loose details including steps and handrails, and I took the opportunity to install an iPhone speaker in place of the 'sugar cube' speaker I had used originally.  It makes a huge difference in sound.  I also carved a new headlight lens assembly and light tube.

In the time since I'd done this model the first time, I discovered ShellScale Decals, who do perfect Conrail GE number board decals.  These are much closer to the actual font GE used on these than what comes with the Microscale set. 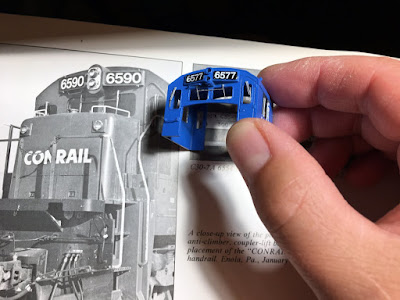 Once the decals cured, it was time to move the wipers from the old cab to the new one, and give the dullcoat treatment before window glass installation. 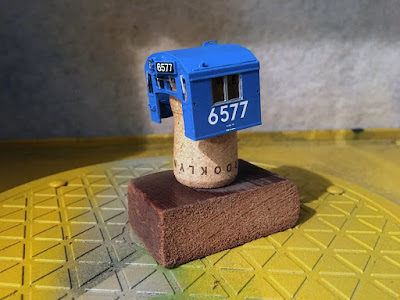 A bit of pastel chalk weathering helped blend the fresh cab into the weathered body.  After installing the new light package, I installed the new cab and attached the handrails.  Well, the brighter headlight and proper number board font are both big improvements. 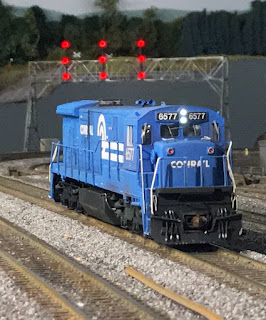 Now completed and back ready for service, the wreck-repaired 6577 poses for a broadside at Onondaga Yard: 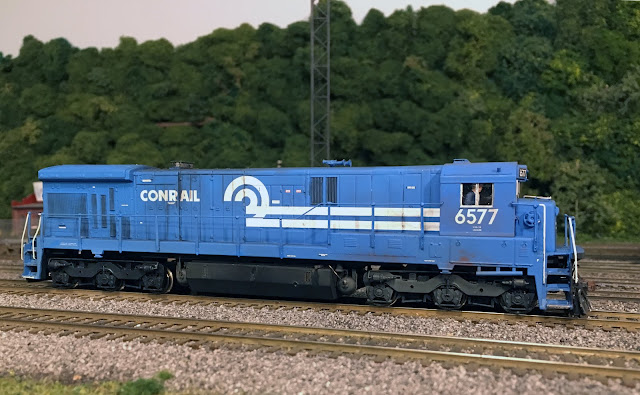 I'll admit that this came out better than expected.  As time goes on I'll add a little more blend to the weathering, but for now this turned out to be a successful rebuild in a situation that looked hopeless to start.  Like the real railroad, sometimes the mechanical shop guys can 'pull a rabbit out of a hat' and get something that looked pretty bad up and running again, adding to the bottom line.

Oh - and I added a guardrail along that storage track, too.