Syracuse, On the Horizon

Scenery on the Onondaga Cutoff has been an organic sort of learning experience.  I am learning as I go, and the vision for how I want it to appear is changing as I learn new techniques, and indeed also as I figure out where the railroad actually would have run.

The most recent development with that has been a new addition to the scene at CP-282.  Now that I have plotted out the route on the USGS quadrant maps, the railroad can develop a more true sense of place.  The route exits Ram's Gulch south of Syracuse and makes a turn to the north, where suddenly the Syracuse skyline appears on the horizon.  I took the photo earlier this fall (special thanks to Nancy at the Brighton Tower Apartments!) and then had a large print made.  I trimmed the sky away, sprayed the remainder with dull coat, and mounted that on black art paper with a thick homemade black art-board frame. Here's the view during the afternoon - to me, this really adds an amazing depth to the scene. 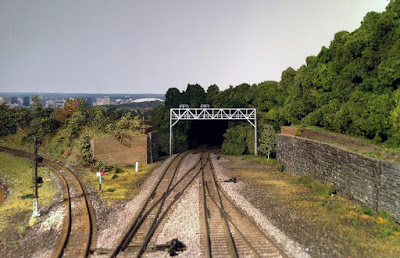 Since we run operations around the clock, I wanted the skyline to be illuminated at night.  It took a lot of thinking, discussion, and trial-and-error construction, but I eventually found a combination of LEDs and incandescent bulbs that when mounted through the backdrop gave a convincing glow.  Forgive the grainy iPhone images - this is much more convincing in person! 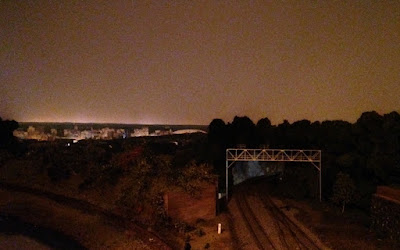 I trimmed the black backdrop paper out from beneath the buildings, so that the entire city would have a glow to it from ambient light, as cities do to our eyes.  Here's a closer view showing the windows I cut through the photo, allowing more pointed light to show at the correct spots: 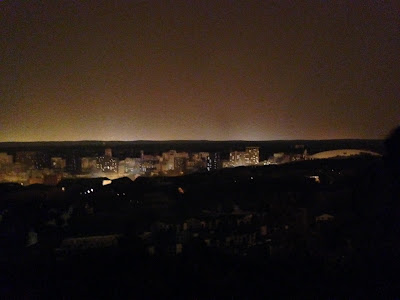 Those familiar with Syracuse will recognize the Carrier Dome on the right, and other buildings at Syracuse University including 22-story Lawrinson Hall, where I lived for the first two of  my four years at SU.  The downtown proper is further to the left (west) with the MONY Towers and Verizon buildings as key features.

The operations on the Onondaga Cutoff, especially those at night, just got a little more prototypical!

Happy Thanksgiving to you all, and best wishes into the Holiday Season!

Earlier this year I was asked to be part of the Garden State Division of the National Model Railway Association's annual meet - a Railway Prototype Meet in NMRA terms - which to me was humbling and quite an honor.  And so, thanks to my patient wife and lots of help from key figures of the crew on the Onondaga Cutoff, I presented a clinic at the RPM on block detection at the meet itself, and hosted an open house for attendees so they could come and see the layout. Here's the first slide: 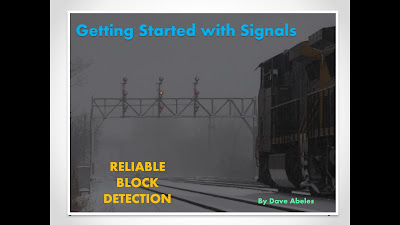 In discussing the open house with Jack T. and Rich W., the two biggest contributors to the operating plan on the Onondaga Cutoff, we decided that we could operate as though this was a small operating session, which served first to show attendees how the railroad works, and also would therefore display the block detection in action.  It ended up being a great evening and a real pleasure to meet the 25 or so people that made the trip out to see the layout!

As always, for me, one of the best parts of the hobby is the social part.  There is no shortage of opportunities to bring others in and to include like-minded people in what we are trying to accomplish.  Thanks again to the Garden State Division NMRA for the opportunity!