Best wishes to all who read this blog; thanks for your support and encouragement!  2012 has been a year of new experiences and new ideas, not without its challenges, but also with new joys and success.  Would that each year ahead could be this way.

Signal work on the Onondaga Cutoff is underway - not too much new for photos, at this point, but that will of course change soon.  Change is inevitable.  The challenge is to make that change progress.

To populate a full operating session with locomotives, I had purposely moved quickly to get as many of my older, non-DCC compatible locomotives in service as quickly as possible.  In several cases, that included a decision to put off the installation of headlights until a later date.

Now, as operating sessions have become more regular and more demanding with additional trains, those units are needed to lead trains during a session, which to me requires a headlight.  Therefore a focus of the last few evenings was to install new LED headlights in a pair of units that did not have headlights before.  Both had been superdetailed in the early 1990's, making both engines almost 20 years old...which simply does not seem possible!

First, I installed a low-nose headlight in CSX C30-7 7003, an early 1990's Atlas product.  Atlas did a beautiful job on this General Electric locomotive, but improperly built this model with a cab headlight instead of the nose headlight, as was standard for units owned by Family Lines/Seaboard System.  I had modified the unit with a non-lit headlight in the proper spot in the early 1990's, and replaced that this week with Athearn lenses and an LED for illumination.  An 'old dog with new tricks.' 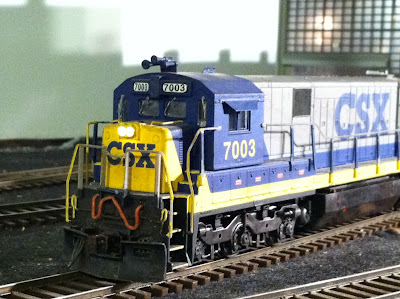 Next up is my only model of a General Electric C32-8, which was essentially an experimental creation by GE in the mid-1980's﻿ and the predecessor of the whole Dash-8 line.  C32-8's were only ever delivered to Conrail, and there were only 10 of them on the roster.  I detailed, painted, and decaled a Rail Power Products shell and mounted it on an Athearn 'blue box' U30C chassis to create my version.  Now, it too has an LED headlight, and this rare bird will now regularly lead freights on the Onondaga Cutoff.  I always loved the tone of blue on this unit: 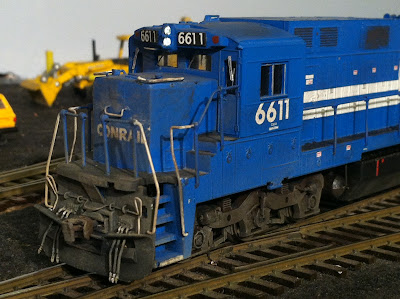 Soon, I will begin again the long process of installing block detection for my signal system.  It's a daunting task - 15 blocks are wired to this point, with about 20 left to go, and each requires rewiring all the bus cables beneath that piece of railroad.  Glad I built everything up at eye level!  It will keep me busy on evenings...along with Christmas presents, time with Kristen & Susie, chores, etc etc etc...never a dull moment, that's for sure!

Posted by RGDave at 8:03 PM No comments: