...the number of DCC-equipped locomotives on the Onondaga Cutoff increases!  I am adding decoders and headlights as I go along, and it's refreshing to begin to see the layout be increasingly populated by locomotives I built years, and in some cases decades, ago!

As a side note, the vast majority of my equipment modeling and weathering is done at my workbench, seen here after a much-needed spruce up that I did last week: 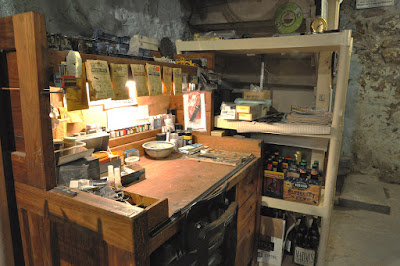 The layout is to the right in this photo, Onondaga Yard just across the aisle.  A key note here are the supplies for another of my hobbies on the shelf:  good beer.  It's also a simple pleasure to open one of those and enjoy it when running a few trains.  :-)

Decoder installation is a major project.  One thing I have learned to NOT trust are the manufacturer-installed DCC "Quick Plugs", the 8-pin socket on the factory boards in most Kato, Atlas, and modern Athearn locomotives.  Recently, I purchased 4 Northcoast Engineering (NCE) 'DASR' decoders, and 4 NCE D16SR decoders.  The DASR's are replacement boards for the manufacturer-supplied PC boards - they are intended to replace the supplied board.  The D16SR's are 'plug & play' and plug into the existing board, replacing a 'jumper' in the socket as supplied by the manufacturer.

In all, only one D16 worked. The other three burned right up.  Every DASR worked as advertised.  While the DASR decoders are a few dollars more, I got tired of the $17 of D16 going up in smoke - so, all my PC-equipped locomotives will receive DASR decoders.

On another note:  anyone familiar with Conrail road freights on the Albany Division in 1994 (including the Chicago Line, of course, but also the Boston Line, River Line, and associated mains) remembers the dominance of 'Dash-7' General Electric locomotives on those lines.  Long ago, I built two big 6-axle Dash-7's:  C30-7A #6569, and C36-7 #6639.  Both were kitbashed from Railpower shells, and both are built upon Athearn 'blue box' chassis.  Now, both are DCC-equipped, with headlights, and are working well for the Onondaga Cutoff.

Here they appear, side by side, in separate multi-unit consists on separate trains in the staging yard: 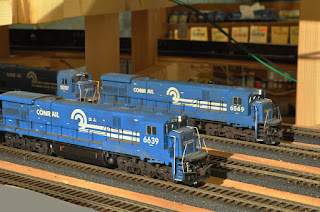 Email ThisBlogThis!Share to TwitterShare to FacebookShare to Pinterest
Labels: decoder

Usually when I'm slow in blog entries on the model railroad, it's because I'm off doing something with the prototype.  In this case, I spent time on three separate trips and got some nice results.  Here's results from two of the three trips as proof: 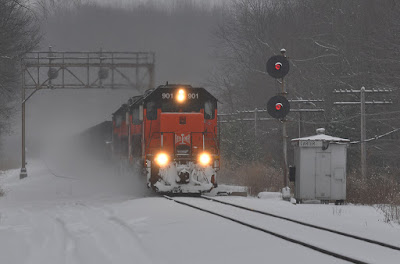 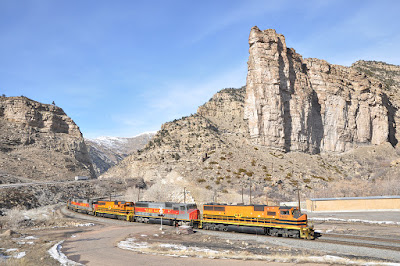 More of my prototype photography is available at http://rgdave.rrpicturearchives.net/ if you are so inclined!

More model railroading to come soon.  Besides the trips, I did get a chance this week to give the work bench a much-needed cleaning.  Also coming soon is learning the hard way about the perils of NMRA-plug decoders.  I did install a new type of decoder successfully, as well.

Enjoy the weekend!
Posted by RGDave at 2:39 PM 1 comment: