Scenery for the Short Line

With signal design underway and new wiring to follow on the OC, the only area where I can begin to install fascia board and scenery is on the M&E.  Fascia is being fabricated from 1/8" masonite hardboard, the same material as the backdrop, and will be installed before scenery so as to help define the land contour in front of the tracks.  A combination of foamboard and plaster castings, as well as some traditional paper mache, will be utilized as base scenery.

Here we see the Skaneateles Creek area on the M&E with newly-installed facia: 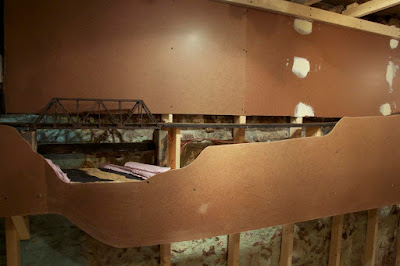 I love the look of model railroads with scenery and fascia - to me, it is a very 'finished' look and lends a professional feel to the look of the entire layout space.  I am eager to get the rest of the railroad to this state, too, but signal wiring must come first.

Foamboard will be stacked, glued, and shaped to represent cliffs, and then I have several ideas for how to model the distinctive Finger Lakes-area shale that is so prevalent in Central New York.  It exists in several shades of gray and dark purple, so it will be an adventure to replicate that look in HO scale!

Today, I have a a few action shots for you all, and a general discussion of the current progress on the Onondaga Cutoff.

First, though, the images.  Be sure to click on each for a full-size view: 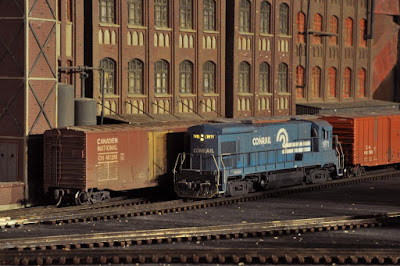 WAON-14 spots boxcars of scrap paper to be used for paperboard at the big Iroquois Paper facility east of Camillus, NY. 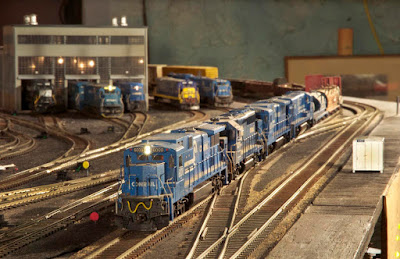 SEBU-7 sweeps around the curve and slams through the crossovers at CP280 with the Onondaga Engine Facility in the background.  Leading three other units is Conrail C39-8 #6000, recently upgraded with an LED headlight.

Now that the trackwork is in place and there are less and less issues with track leveling, alignment, and design, the Onondaga Cutoff is moving towards the next real challenge:  an operating signal system.

Ever since I was very young, I have been interested in signals on railroads, and in how they function.  It follows that to me, the crown jewel of a quality model railroad is a prototypical, working signal system.  From an operation as well as a photographical standpoint, nothing compares to watching a train on the layout 'knock down' the correct signal aspect for the move at hand!

Thanks to the efforts of several operators, namely Nick and Alex, I am formulating a plan and budget for the purchase of components that will be used to replicate block detection of trains which will work with computer-based CTC, including the operation of a working signal system.  While I am fully commited to Northcoast Engineering (NEC) components for the DCC system, I will be using an older Windows-based PC to run free software known as "Java Model Railroad Interface" or JMRI for signal control.  JMRI will work with a Digitrax signal system to drive signal heads and display aspects for operations based on block occupancy.  I will do my best to document the process for you here.

Since block detection and signal wiring will require extensive additional wiring work beneath the roadbed, I have elected to minimize progress on layout fascia and scenery until the signal system is installed.  It will be much easier to run new wire and make new connections before the fascia blocks easy access!  However, this approach means it will likely be more than a year before scenery begins in earnest on the main line.  However, since the M&E will not have signals, work on scenery there can begin sooner.  Plenty more to come as the winter wears on!
Posted by RGDave at 1:53 PM 1 comment: