After a big push in the last few weeks, it's now time to report that the installation of 'deep' staging is complete on the Onondaga Cutoff!   Last time we finished up the trackwork installation, which has since been wired into the system.  The final step was to replace the Island local control panel (LCP) with a new one to reflect the changes.

Thanks go to Nick Anshant on this step, as he is always willing to use his experience on the prototype to help make the Onondaga Cutoff better. We went back and forth to settle on the new layout of the lines and also the new names - these tracks will be named the 'Old Auburn Main' along with a pair of running tracks, reflecting Conrail practice in the Solvay, NY area on the prototype. 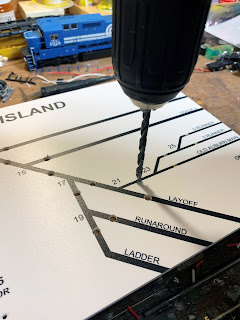 Nick had done standard artwork to reflect Conrail practice in the signal bungalows in the field and had the artwork from the previous panel that he was able to modify to reflect the new trackage and switches.  One the art was set, I sent it off to a local sign shop who printed it on 1/4" thick PVC.  I chose plastic here instead of aluminum because the mounting area on the masonite hardboard has a slight curve.  A side benefit of PVC is that it is easy to work with.  I used a 1/8" allen wrench screwdriver as a hole punch by setting the new panel on flat wood on the workbench, and tapping the back of the screwdriver with a small hammer.  This allows the holes to be drilled cleanly and helps prevent the drill bit from wandering.  Here's new panel ready for light installation. 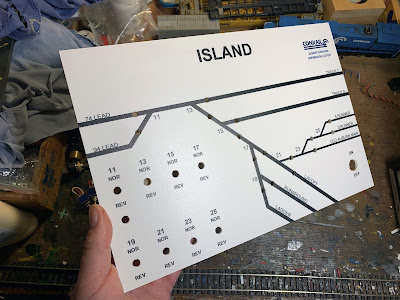 It is nice to do this work at the workbench, too, before trying to mount the panel to the layout.  Now it is time to carry it to the location of the install - much of the work this time around is to simply move the controls from the old panel to the new one, before installing the remaining new hardware. 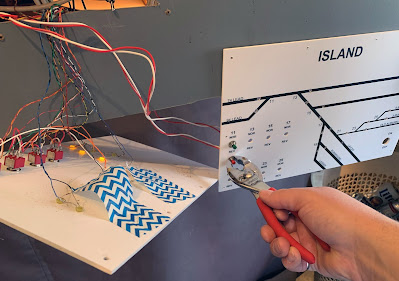 Thankfully, the old panel was set with screws, and had enough extra length in the wiring to allow it to hang forward for the work.  I moved the pushbuttons and LEDs over in number order, pair by pair.  It was an arduous and slow task but that was to be expected for a project like this.  However, I did not like putting all the tension on those soldered joints.  So, it was time to build a temporary work shelf. 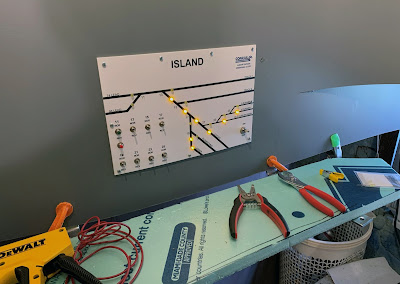 Using some of the leftover brackets from the benchwork construction for the deep staging and some C-clamps, I set two supports attached to the masonite and set some 1" foam insulation left over from a recent scenery effort across those to act as a work shelf.  This allowed the rest of the cutover to go smoothly, along with the install of the new double-pole, double-throw (DPDT) toggles for switch control and the new LED indicator lights for the new tracks.

By the end, I was more than ready to clean up the area, put the tools away, and turn on the final installation for testing.  I ran engines up and down each route, checking to make sure all was properly indicated and powered.  I tested the on-off toggle as well and sure enough, it checked out!

In summary, this was a long-awaited project that in some ways I was dreading.  It was tight, and operationally more tight than anything so far on this layout.  But it came together thanks to working with the team - modifying the plan and the construction by discussing with others, having others help to set components in place, and finally making the decision to dive in and do it at the tail end of this pandemic before life gets hectic once again.

Now comes the exciting part - assembling the unit trains to occupy the track, and adapting our operating plan to fit the new traffic!   Stay tuned as we head into an exciting spring on the Onondaga Cutoff.