One of the best things about watching trains on an important main line is that you never really can know what is coming next.  On the Onondaga Cutoff, one of the challenges for the operation is to build in enough variability that we capture some of that anticipation.  While the existing traffic base covers most of what would be seen daily along the Conrail Chicago Line in 1994, some of the less-regular traffic - namely, coal and grain unit trains, are not yet represented.
Since the 5-track, 70-foot-long, double-ended staging yard was designed with Tony Koester's '2n+1' idea, we have filled up the capacity with movements typical of trains that ran across the Chicago Line in that era.  Even though we have installed crossovers at the middle of the staging yard, and that we turn the consists to represent different trains, we are still out of room for new consists and especially those that would not run each day - unit coal trains to northeastern power plants, and unit grain trains to and from the Port of Albany, NY.
Enter the idea of 'deep' staging. By designing a new storage area, stub-ended and below the existing level, we can open up a new level of variety.  This new area will be constructed to house unit grain and unit coal train consists and introduce those movements to less-than-daily operations on the Onondaga Cutoff.  Operationally, we need this to be located in a place where trains can run out from the storage in either direction, adding to the complications.
The hard part?  Building it! 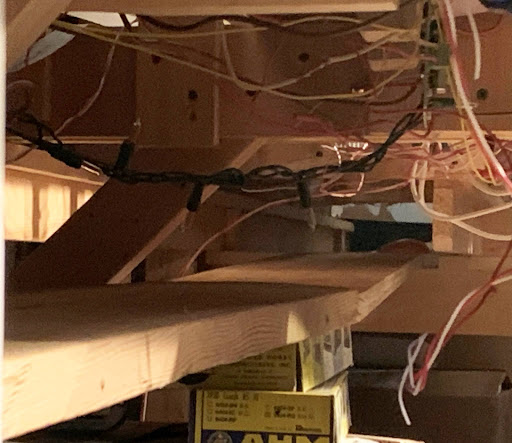 The only place where new storage can be added that has direct access to both directions would be via the Island, which currently serves as a locomotive servicing and storage yard.  It is tight, but so is any expansion:  we have to make due with what we have.  The operational benefit here will outweigh the difficulty in installation.   In the photo above, I am test fitting the new subroadbed.  See that small gray tunnel ahead to the left?
One of the major difficulties in doing construction beneath existing layout, especially when clearances are tight like this, is tracklaying and wiring.  Alex Lang had a good idea - do as much as possible before mounting on the layout.  So, assembly of this will be done on the floor in three sections: the straight area, and two separate corner pieces, so as to allow less tracklaying and wiring while under the layout.
Projects like this are a great way to use some of the materials I have stored over the years from other home projects or earlier layout projects.  I had a few strips of leftover plywood stored in the garage that I used for the subroadbed and for the splice plates to join them together end to end. 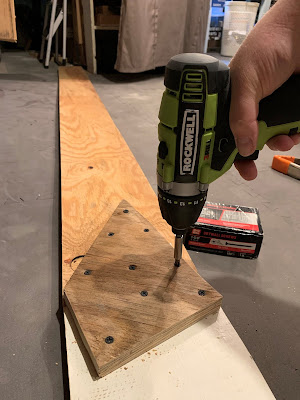 Once the sections were assembled, including checking the joints that needed shimming to match the heights, I moved on to adding guardrails.  Since much of this will be out of sight, guardrails of leftover masonite will prevent any derailed cars from hitting the floor. 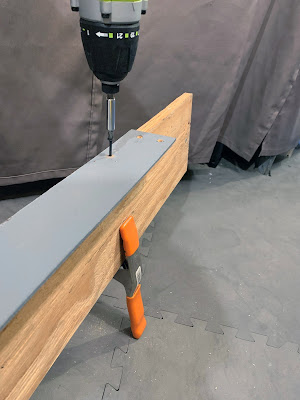 Once all guardrails were installed it was time to seal the wood ahead of tracklaying.  Using some old latex housepaint, I painted the whole assembly gray. 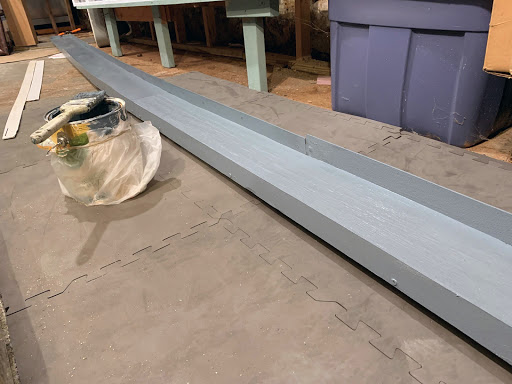 The paint was allowed to cure overnight and now it is easier to see the gentle turn built into the middle of the assembly, so as to get the tracks closer to the aisle from the tight path they need to follow to reach the Island.  Now, it's time for tracklaying, for the first time in several years.  It takes a little getting used to! 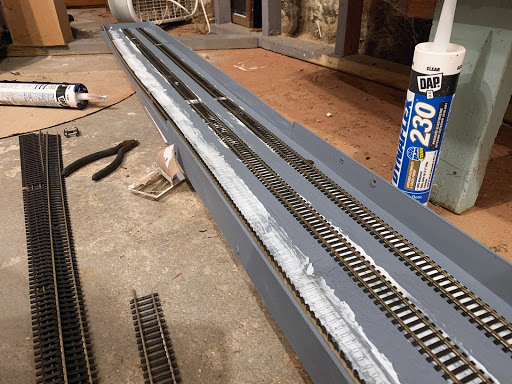 This process will continue until all three assemblies are put together.  I will also wire this track while it's on the ground so that once installed, we just need to connect the joints and go.  This track was weighted and is curing overnight before the next 6 feet is laid.
Plenty more to come as we wrap this up!  Enjoy the last few days of winter and I will be posting more back here soon.