There aren't too many model railroaders that don't love locomotives.  Each of us has different favorites, of course, but there is something about locomotives that we all enjoy.  My good friend Mark, who is a big fan of railroading in New England and Eastern Canada, has built a neat collection of custom-painted and kitbashed power from that region.  He doesn't have a large layout, and I figured he would get a kick out of seeing his engines on a long train.  So, I invited him down with some of his power to run a few trains on the Onondaga Cutoff before I begin the change over to DCC.

First we put together a lashup of 1980's/90's Guilford power - an ex-N&W SD45, an ex-AT&SF SD26, and an ex-Illinois Terminal SD39.  Three specific designs of locomotive that never wore Conrail paint cross the Nine-Mile Creek bridge eastbound on what we called a 'WAME' (Waterville, Maine to Mechanicville Yard, NY): 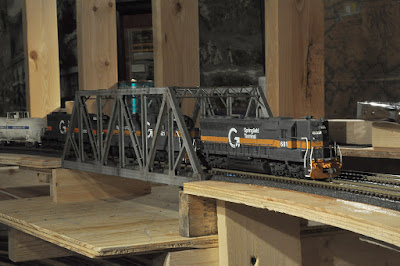 Following that, Mark pulled out a few units that he'd painted up in Boston & Maine schemes, and we built lashup of those for the same train: 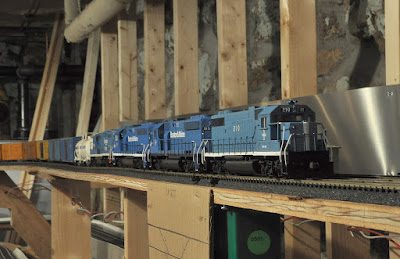 Sharing model experiences like this is always fun, and I hope to continue the trend from time to time even after DCC!
Posted by RGDave at 9:25 AM