The yard is growing...last week the west end ladder of the South Yard was installed including the first few feet of track on each of the yard tracks.  Last night, I finished some switch modification for the north ladder, and laid that.  Here's a view of the south ladder, crossovers, and weights atop the freshly-laid north ladder: 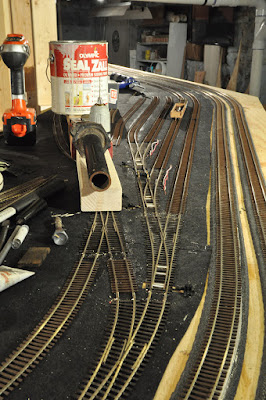 The sharpest curves in the yard are about 24 inches, though that is an estimate.  Using flextrack, it would have been a good idea to invest in some of the metal guides you can buy for handlaying track that would set the radius definitively.  I'm confident that an estimate will work for yard tracks.

Then, to test my kitbashed 'insulated' (i.e. DCC-friendly) switches, I wired the entire west end of the yard to its own bus wire, just to be sure that an engine would run through the trackwork and not short out.  (A post about how I modified the switches is forthcoming.)  Later this fall, the yard bus will be powered by a separate DCC booster than the mainline, and will have its own power-breaker, so as not to short the whole railroad when there is a minor yard derailment.  So far, so good.

Here is the west end area as it looks now, glued in place and fully wired.  All that remains for new track now is the eventual shortline connection (far back left in this view) and the trackage for Niagara Mohawk Propane (the switch at far right, on the North Runner). 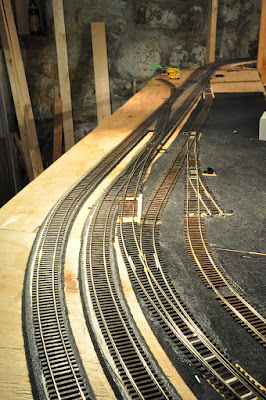 In this view, from left to right:  Track #2, Track #1, South Runner, North Runner.  I'm excited how this whole interlocking turned out - it captures the 'look' of a major interlocking at the end of a yard, and I think it flows nicely.  There are a few rough transition joints that I will use my Dremel to smooth out, but it should work well.  The big curved turnout in the bottom right hand corner there is the #1 Track-to-South Runner connection, and will be wired to throw with the mainline turnout just beyond.  They will function as a crossover.

I will have some time for more yard progress tonight - a few more pieces of track for tracklaying, and then wiring what I put in last night.  Little by little!
Posted by RGDave at 8:40 AM