Pushing through the Fall

October was a month on paper that I knew would push the limits.

As the world reopens from this pandemic, more opportunities to interact are available, and with the kids getting older there are more than we've handled in the past. All of these take time. So far we've been able to schedule most of it without conflict, but in doing so each weekend and most nights are occupied with some sort of planned activity.

And the best-laid plans will change with the passing of a mentor.  Tom Davis, Proprietor and Innkeeper of The Station Inn Bed & Breakfast in Cresson, PA, passed away on October 5, 2021 at the age of 90.  His life was a full one: full of experience, of pushing limits while maintaining civility, of quiet reflection while welcoming guests.  Tom was a character - warm but wise, fun-loving yet refined, a man of intelligence with a dry, quick wit. 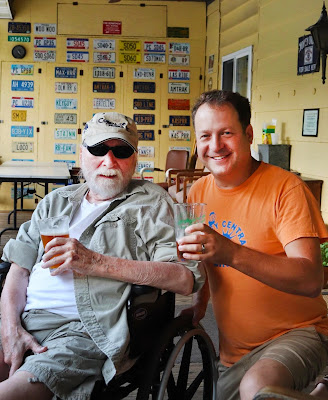 In 1994, a handful of teenagers made a reservation to stay at this former railroad hotel next to the Conrail main line across Pennsylvania.  I was 17, and my brother just 15; our parents let us and three of our close friends make a 250-mile drive from New Jersey to stay at this inn and watch trains for the weekend.  Different times!  But my dad had his hands full with my sick mother and disabled sister, and in the chaos we were allowed a few days adventure.
Well, ten years later, we were still at it, with Tom as a guide and authority figure we all respected.
Each year was a similar pattern.  We'd reserve 3 nights, round up a bunch of train friends, drive to Cresson and spend the whole weekend watching trains at areas near the Inn or from the porch, eat too much pizza and wings, drink too much beer, and go home mentally refreshed and physically exhausted.

Over the years, the Inn was a constant when so much else changed.  Conrail was merged into NS and CSX, with NS taking over the operations past the Inn.  Shortline RJ Corman reopened coal branches while we watched and rode along, a handshake arrangement thanks to Tom.  Some of us went to college, all got jobs, some changed jobs.  Most are married, some with kids.  And many of us dealt with the death of parents.  Many moved, some far away.  But we all made time each year for this trip, and it had become a bit of a retreat. 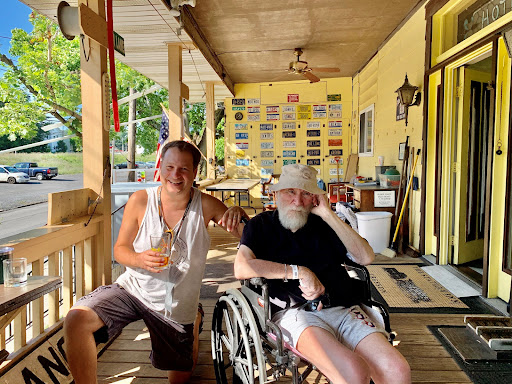 Tom's health in recent years had some slips and setbacks, but most years he would find a way to spend time with us, sharing stories and wisdom, giving us laughs.  We all knew he was strong but still, the sense of change was close.  This year, though, he was looking forward to our visit and indeed was more himself than any time in the last 4 years. 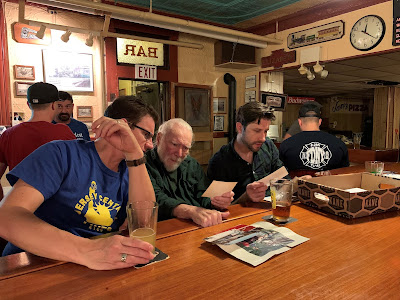 This year, he was out with us on the porch for hours.  He ate meals with us, and talked almost like the 'same old Tom' which was a joy.  Incredibly, too, he asked to come down to the old tavern in the basement of his Inn each night with us, where we had a private party set up like usual.  For the first time in years we looked at photos and he drank beer with us late into the night.  Note the time - that's 12:21 AM, by the way!

And on Friday night, word spread amongst the 28 attendees that Tom would be down the bar again with us and sure enough we got a photo or two with most of the crowd in the middle of the party. 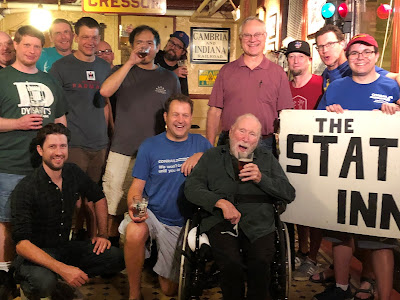 This is how I will remember Tom Davis:  with a beer in hand, smiling, enjoying life despite all the usual trials and tribulations he'd survived.  Known and respected by guests like us, as well as peers from around the world, Tom led a life full of railroading, travel, and learning.  Tom was a man of many backgrounds: an intellectual, a steam locomotive engineer and fireman, and innkeeper, and he shared all of those with whomever showed interest.

Godspeed Tom!  Thank you, for everything.

Email ThisBlogThis!Share to TwitterShare to FacebookShare to Pinterest
Labels: Cresson