Scenery is one of those things that really comes in streaks on a layout.  There are a lot of moving parts that need to be organized in a way that we don't end up having to re-do work, and more than that, there is the constant fact that what you are installing is what people will see.   In  many cases, their first impression of the whole layout is based on scenery.  So - I want it to be as effective as possible. 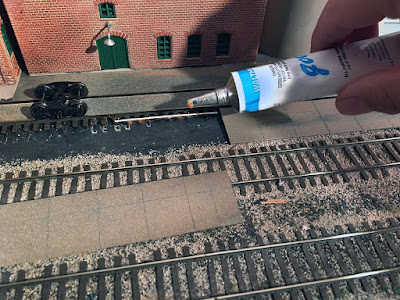 Now that the Doelger buildings are placed, I feel the urge to finish up the scenery here and move on.  It will feel great to have this scene completed.   So, with the structure finalized, and the concrete slabs cut from styrene sheet, it was time to paint them, weather them and install them.  I scribed lines in all of them by dragging an old, worn out x-acto #11 blade across using a straight edge.  I positioned the blade upside-down so as to get a wider crack, suggesting construction joints in the slab.

I sprayed the styrene black first, then after a few minutes over-sprayed that with beige paint, and finished it up with 'pebble texture' overspray from Rust-Oleum, available at big-box stores.  I sealed the whole thing with Testors Dullcoat.  This gives an even, but random, pattern of tiny beige bits that appear to my eye to do a nice job simulating worn concrete. 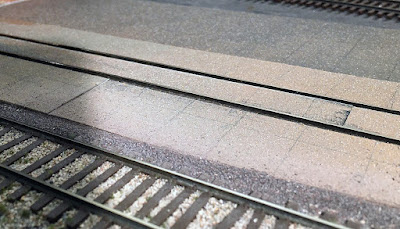 Each slab was lined up using some scrap styrene below on the ties to adjust the final height, ensuring the modeled concrete was below the top of the rail but high enough to appear flush to the eye.  This helps with rail cleaning and operations - we want the wheels on the cars to hit the rail, not the concrete.  Special care was taken to ensure the flangeways on the inside of each rail had sufficient concrete. 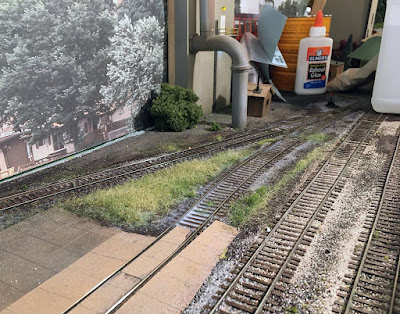 With the slabs glued in place, I test ran a few cars again with no issues.  So it was time now for some ballasting along the track and edges, and installing cinders and weedy grass around the track areas.  As usual, I sprayed the area with isopropyl alcohol and spread diluted white glue in the areas where I wanted the grass and cinders to stick.  I added static grass first with several different colors and lengths mixed together, and went back to add an overcasting of the cinders.   Weeds were glued in separately afterwards, and the whole thing left to dry overnight before I use a small vaccuum with thin fabric over the nozzle to pick up all the product that didn't stick.  This way, you have patches of attached static grass, and can reuse the fibers that didn't stick.

Another challenge when doing modern buildings (and yes, I still count the 1990's as modern, compared to most other model railroads around!) is that so many industrial buildings have been modified over time.  The majority of those did not use the same architecture as the original structure - modern industrial structures make extensive use of sheet metal and corrugated siding, as opposed to brick and mortar.  So, for the grain unloading area at the brewery, I selected a more modern structure to be built around the malt house where inbound dried grains are roasted to become malt. 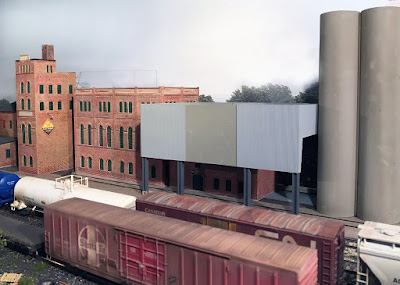 Yup, that looks rather out of place, doesn't it?  Well, lots of things in life look out of place.  The nature of things is to change.  So, capturing that notion in model form is part of the goal!  Many modern industries in the Northeast are an incongruous mix of old and new: old buildings exist of course, but if all your old buildings look perfect and unmodified, you have a rather unconvincing industry.  A modern, successful business would add to their facility in the most cost-effective manner possible and Doelger is no exception.

A few more lights are in place, and with some final placement of static grass and clean-up, I will have the 'final' views of Doelger coming soon.  Stay tuned!