After the Train Plan, the other central piece of paperwork in any operating session on the Onondaga Cutoff is the car-forwarding plan, as designed by Jack T. and Rich W.  Based on my research and layout space, I had come up with several industries loosely based on prototype facilities on the Chicago Line.  While not exact replicas, these industries are built to approximate the feel of some of the online industries that Conrail (and Syracuse-area shortlines) served.  This worked as we got sessions started two years ago.

However, yard traffic naturally ebbs and flows and due to the yard’s capacity of approximately 75 cars, and we realized quickly that things can get rather unmanageable for the Yardmaster as there was no set plan that allowed operators to plan ahead.  Nor was there any consistency to when the setouts and pickups were made.  Jack and Rich therefore took the loose plan a step further, devising a full interchange plan to accommodate where these cars would have come from and how they would be forwarded back. 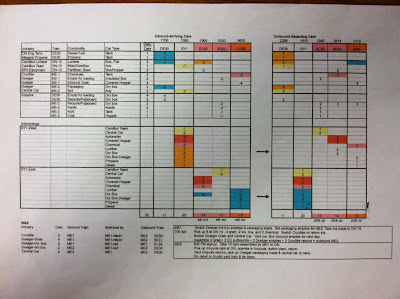 This plan has become the network behind the operation, assigning each and every move through Onondaga Yard a specific set of orders that are incorporated into switch lists and interchange manifests.  All trains that work the yard are on this sheet, as well as every industry, and the time the train arrives and leaves.  In the matrix are the car counts and types, helping operators keep track of their moves.  It appears complicated, and it was to create; however, operating with it is actually much simpler than it looks, and the entire operation is smoother now.

Now, it’s the key to the whole operation, and we’re learning more about it with each session!

Finally, an update for you on the signal progress:  the final 3 signal bridges are under construction this month, and should arrive before the end of 2013.  That will complete my order with Integrated Signal Systems.  With all the remaining hardware on hand, the completion of the signal system is just a few months away, and a dream of a fully-signaled, dispatcher-controlled mainline will be a reality.  These are exciting times!