Preventive maintenance improves performance and increases useful life.  This is a fact of life, and is true at your home or with your car, just as it is for any business facility or piece of equipment.  In an effort to stay ahead of broken-down equipment or other issues such as dirty track that detract from the operating experience, a small crew gathers on the Onondaga Cutoff ahead of operating sessions to work on running maintenance.  We clean track, arrange paperwork, consist locomotives, and clean their wheels.

A recent session saw more than 40 locomotives all together on the Island ahead of cleaning and reconsisting, something we do to provide different locomotive lashups each month.  It reminds me of 'Ben's Bridge' in Selkirk, NY, in the early 1990's. 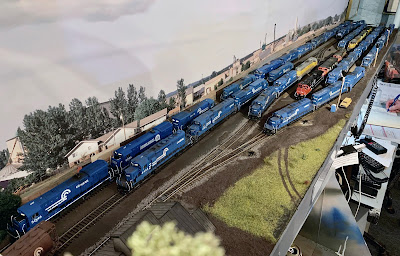 However, despite regular maintenance, issues happen.  It is always a little ironic when modeling railroading requires 'actual' maintenance work!  While many operations-based layouts use 'situation cards' with fictional issues for crews to resolve or report along their run, the Onondaga Cutoff is intense and robust enough that actual issues occasionally arrive for us to handle.  Occasional broken couplers or mechanical issues are handled in operating sessions in the same manner the prototype would, as far as we can take it while still having fun.

C40-8W locomotive 6213, one of the Atlas Model Railroad Company's HO scale model of the massive GE diesels, is a case in point.  As I was positioning trains ahead of the session, suddenly a manifest freight stalled on the hill despite three big units, 6213 being third of the three.  I stopped the train and examined it to find that two of the three axles on the rear truck were not turning.  One was, though, which made it even more strange.

I set the locomotive aside and made time to disassemble the truck this week, and was surprised by what I found. 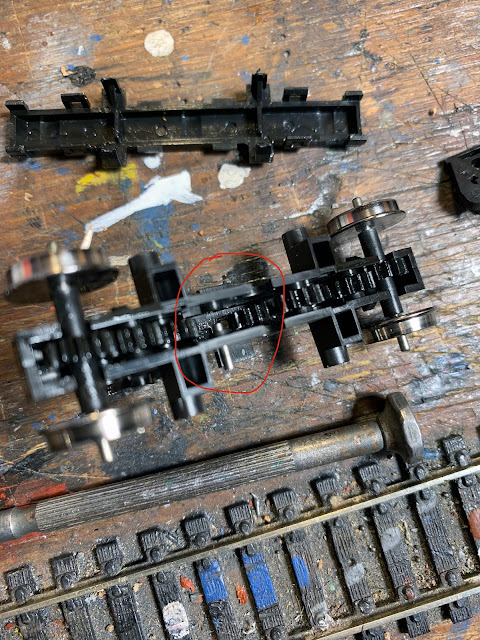 See it?  I circled it in red for clarity.  The metal gear axle, a pin around which the gear rotates, had slid out of the plastic frame, allowing one of the idler gears to fall off and float around in the gearbox.  It jammed the other two axles, while one axle was still connected to the worm gear.  After some work I got it back together and reset the axle, but this one was a strange (and real) problem.  Thankfully we are back in service after the repair.

So, who needs situation cards?   Just run that railroad like a railroad, and the challenging situations will find you soon enough, allowing crews and managers to work through problems to a solution to keep the trains running.  We can't ask for more from a hobby than that!