One of the side projects this summer has been building and adding a roadway deck to the overhead bridge just east of CP 280.   While this green bridge has been featured in a number of videos and photos, its high elevation creates a side view that helps hide the fact it was incomplete.  That will no longer be the case after this project!

I began by purchasing thick styrene stock from Evergreen from the local hobby shop - I used 0.080" thick stock, and could have gone more thick as well.  Still, since it would be cut with an X-acto knife, keeping it on the thin side helped in construction.  I measured the dimensions of the bridge I had kitbashed from a Walthers double-track through truss bridge (https://onondagacutoff.blogspot.com/2017/08/on-overhead-bridges.html as well as https://onondagacutoff.blogspot.com/2017/11/filling-in-blanks.html) and cutting it to fit. 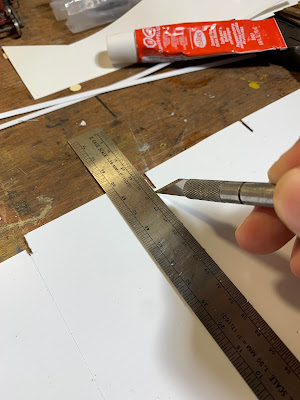 Note the notches - these are needed to fit the deck around the angle braces on the bridge that help keep the prototype structure (and the model structure) square.  These needed to be carefully measured to ensure proper fit.

I added strips of 0.080" styrene cut to a scale 18" wide as curbing to the deck with Testors Plastic Cement, and joined the additional longitudinal sections with bracing and more glue.  Panels as well as patch outlines, which on concrete decks tend to be located near joints, were scribed in by backdragging the blade with a straightedge at each floor beam per the prototype.  Several test fits also helped ensure all was lining up correctly on the layout and on the bridge itself. 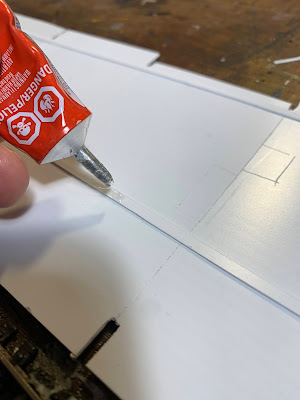 I put aside the whole deck to cure and suddenly it was three months later.  I'm finding time in my forties can get away with things.  With some time over the last few days, though, each evening I headed down for more progress.  Paint came first, and I used several different sprays with colors I had on hand.

Aircraft gray primer from Testors was used for the worn asphalt approaches. For the deck, which is modeled to resemble poured concrete, I took a tip from the military aircraft modelers who do a wonderful job with 'marbled' weathering by layering sprayed paints, starting with dark on all the seams and overcoating with several light coats of different grays.  This way the seams have a dark depth that they don't otherwise have.  I also added a layer of Rust-Oleum textured rust paint to give the surface some grit.  I also did the same process for the sidewalks with a different seam pattern per most prototype concrete sidewalks we see.   The result was a nice varied surface that resembled old concrete.

Another military modeling tip was to use Pledge Future Shine instead of glosscoat ahead of decals.  I gave that a shot, too. 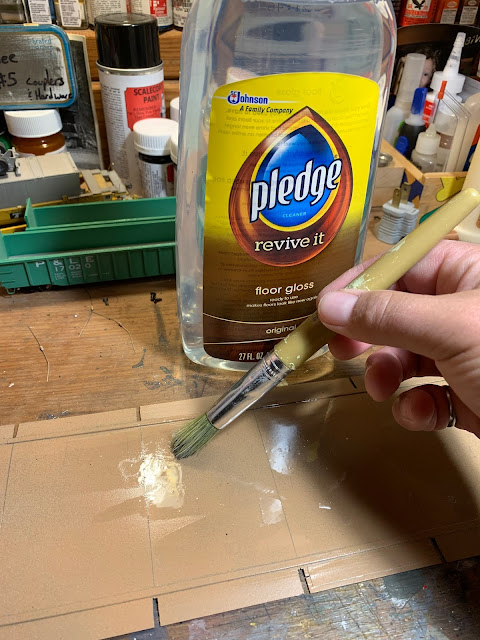 Brushed on per the instructions, the product flattened right out and created a high-gloss finish that was nice and thick.  (Normally I'd have sprayed it through the airbrush, but given the application I wanted it thicker anyway.)  On the curved section, I left the Future coat off, since I am painting those curved lines. 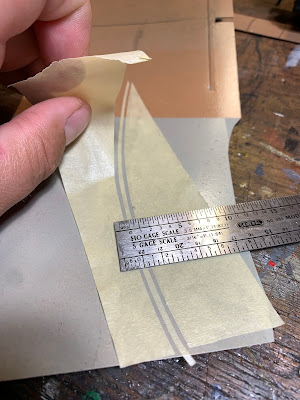 I used a large aluminum 'Brooklyn Brewery' wall sign as a template for my curves - it matched perfectly and gave me a constant curve for the cuts.  Cuts were made with masking tape on glass and carefully reapplied to the road.  A quick airbrush spray with an old bottle of C&O yellow from Floquil gave me good results, and the only paint bleed over was fixed with more hand-mixed gray along the yellow line.

The remainder of the striping is decals from Summit Custom, and they worked very well.  Over several nights I installed them, again measuring carefully to keep all in line. 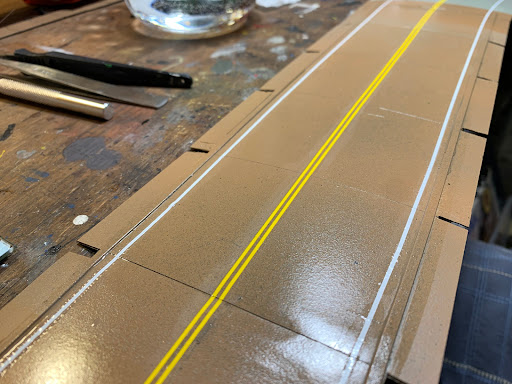 The gloss helps you see the nice texture added by the Rust Oleum which, while the particles are a bit large for HO scale, will give a nice 'not-perfect' feel once finished.
Once the decals cured, I sprayed the whole deck with two coats of Testors Dullcoat and one of Tamiya Flat, to ensure no shine remained.  It covered perfectly and I moved on to weathering.  Roads get most dirty not where the tires roll but where the oil drips from engines and chassis build up over time - the middle of each lane.  I also added a few patches with gray paint mixed to appear like worn asphalt. 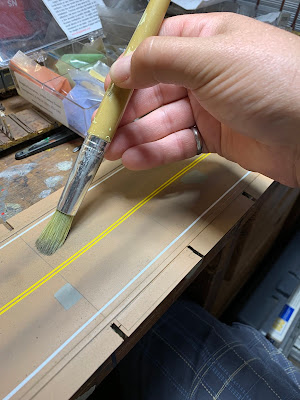 To my eye the decals really make it pop!  The weathering helps too, and the deck is coming together well now.  Last night I used canopy glue to cover the floor beams on the truss, where I used files and heavy small objects to hold the deck flush while the glue cures. 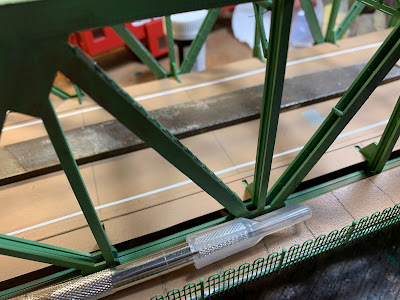 Once this cures up, the final step on the workbench will be to scratchbuild the New York State DOT guardrails and install them behind the curbing, and then for the final install on the layout.  That's my next project for the next month!

Each structure and detail takes time and I believe it's better to install items in stages rather than have them sit on the workbench for years.  This bridge is a favorite of several OC regular operators as well as Railroad Model Craftsman editor Otto Vondrak, and has been featured in RMC and MR photographs.  That's proof positive that there are times when it's better to work in stages on big projects like this one - the permanent scenic element can be the placeholder as well!