On Temperance, and Permanence

Model railroading is a curious hobby of fascination and vision, and one that involves an interpretation of time and purpose.  While the trains take center stage, it is their movement that sets this hobby apart from the majority of other modelmaking hobbies, and the operation of these models in concert with each other and with a plan of some sort that brings life to it.

Temporary structures 'place hold' on a layout so as to get operations started, and give crews some visual cue of why the cars they are moving are placed there.  Such has been the case with Doelger Brewing on my Minoa & Euclid. Here's an overview of the temporary structures: 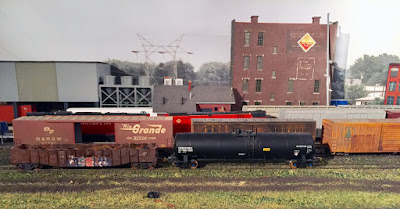 These are pieces of different kits I'd had from other parts of the layout, and several building flats that were in boxes people had donated to me over the years.  Cobbled together they make a scene look industrial, and with a sign or two that is all that was required to deliver the visual clues I was looking for.

Author Tony Koester has reflected in his writings over the years on the sense of purpose in operations, giving the railroad a sense of time and place in the greater transportation network that makes railroading in general so compelling.  Tony has made the argument that temporary structures pending the permanent models add a great deal to operations, and I agree.

So, as the brewery continues to be part of the operation I have finally begun construction of the 'permanent' buildings for the industry.  These are from the Heljan kit for the brewery, to which I will add some modern structures and additions.   First step was the brick mortar, which was applied by painting all the brick sheets with acrylic paint in a mortar color, and then wiping the brick faces clean. 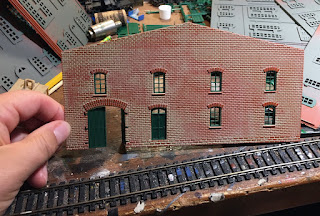 Once dry, window frames and doors are installed.  Window glass will come later, once weathering is completed.  I like how the paint is uneven, suggesting bricks laid in different courses by different masons.  The windows 'pop' with the drab brick around them.   Finishing details will include painting random bricks different shades, and I think it will be convincing.

Since the structures will be lit, I sprayed the interior side of all walls with a dark gray color so as to prevent light leaks, and used magnetic clamps to hold the glued seams square while they cured. 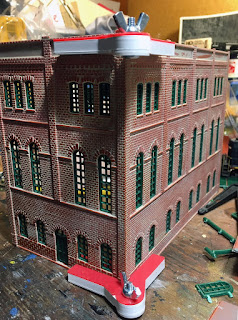 Testors plastic cement worked very well here so far, and with the clamps I am getting nice tight joints that are so far lightproof.  I will use shadowboxes inside the structures so that certain windows are lit and others dark at night. 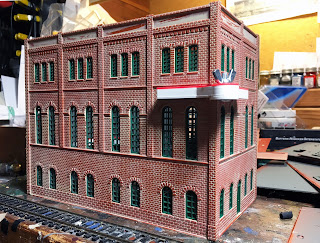 For the interiors, I am also planning to install a brewhouse, so that you can see through the large windows into the tanks and kettles for the brewing process.  I think that will be especially striking at night.

The architecture part of model railroading is one of many subject areas, and each offer areas to learn and explore.  More to come as this process continues!

The sun sets on a humid summer evening in summer 1994 behind eastbound autorack train ML-482, as it rolls through CP280, at Onondaga, NY.