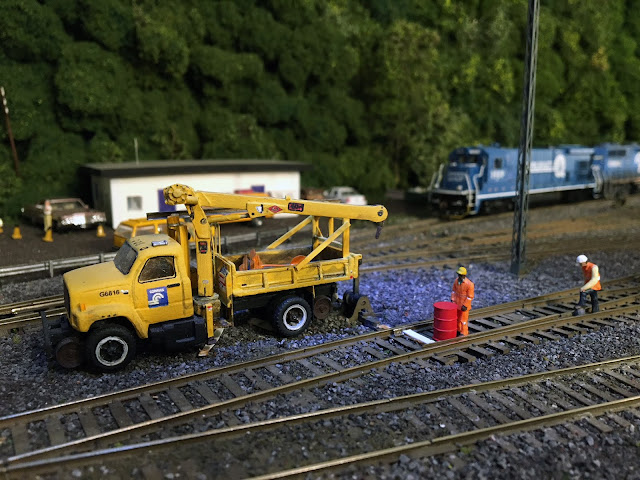 Here’s a photo of an actual infrastructure issue that occurred, and the subsequent repair that we chose to model during operations.   One of the switches on the west end ladder tracks in Onondaga Yard experienced a rod failure during the most recent operating session.  Rather than make a quick repair during the session, we locked the switch in one direction, simulating a ‘spike and block’ situation where crews mechanically fix a switch to prevent derailments due to a broken component.

Once the sun came up, I placed one of my block truck models at the location with some figures to simulate the repair process.  After the session I made the repair – a careful application of Walthers ‘GOO’ adhesive did the trick, reconnecting the throw bar with the ground throw.  For this session, we will have the switch out of service for the first hour or so, allowing the track crew to finish their work – and adding some variety to the yardmaster’s job.

Modeling maintenance is a fun part of operations, and helps challenge operators to think outside the usual box of the job.  Where will the next repair be needed?  We will know when it happens – and we will deal with it, like they do on the prototype.