Reminders of the Past

It has been discussed before how model railroads function as a sort of time machine for us that are interested in history or in operations.   While the last few installments have left us with a shiny new undergrade bridge, one way we can emphasize history is to use weathering to fade, but not erase, elements of the past in our modeling.  Conrail, for example, ran its trains almost entirely on routes built by its predecessors.  On the Onondaga Cutoff, the predecessor is the New York Central.

Here, I have applied a series of thinned black with an airbrush to the bright silver girder.  I then moved to add layers with pastel chalk powder, including black and also rust on the bottom flange.  Abutments were painted to represent old, weathered concrete, and then were dusted themselves with pastel chalks.  What a difference!   The old lettering and logos peak through just enough that an observer only sees the lettering after staring for a few minutes. 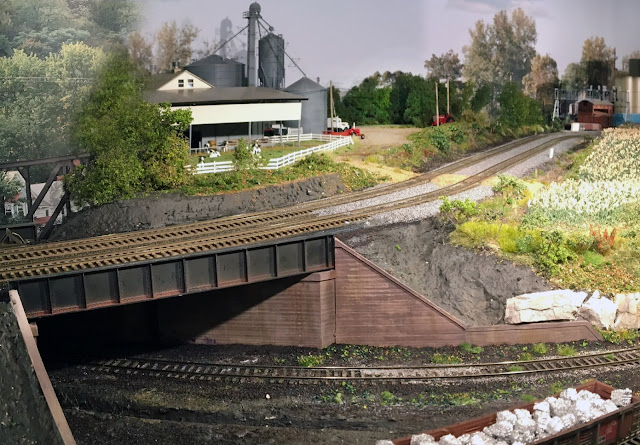 Here's an aerial view of the whole scene, now with some cinders and ballast along the Cazenovia Industrial Track.   Soon I can feather in the remaining ground cover, a few trees, and we're there!

Sadly, the passage of time also can bring some darker news, and I have some today in that my father's brother, my Uncle Paul, passed away yesterday after an accident at home.  He lived a full life and despite living in Australia, he made several recent trips to the US to spend time with us.  My children knew him, and my heart goes out to his wife and family in Australia.   In the end my father and Paul both passed away doing things they loved: being independent and strong men.  They both passed on their own terms, and both will be missed.  Here is an image, courtesy of Lou Capwell, of the last time each of them visited the Onondaga Cutoff. 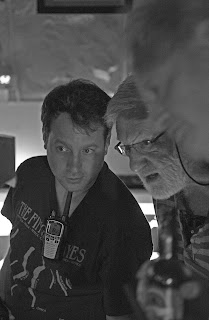 This is a good time of the year for reflection, for consideration and quiet appreciation.   Here's to the memories of Paul and Peter Abeles, two brothers and good men for which I am thankful.