Dairy Farmin' on the Onondaga Cutoff

Over the last few months, I have been working with a model railroad friend of mine to fill a long-vacant scene with a sight common in Central New York – a dairy farm operation.   The Onondaga Cutoff as you all know by now is a fictional bypass through Onondaga County around the City of Syracuse, NY, and woven throughout the actual Onondaga County are a number of large family dairy operations.  As some of the longest-standing commercial property in the area, I felt that a dairy farm would help tie the fictional route to the region.  Thanks to Jason's talent and time, the results are exciting: 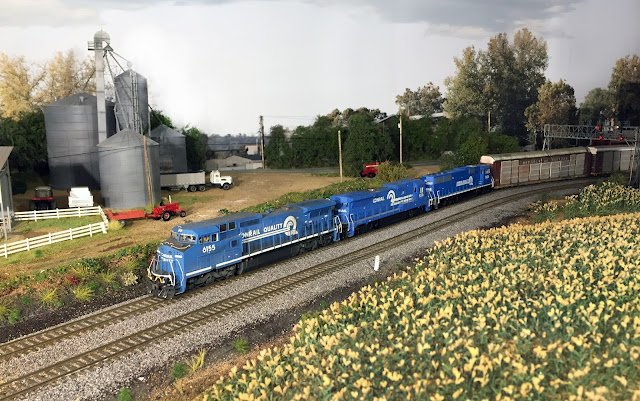 While corn fields and a farm could be many locations, the New York Central standard signal bridge, GRS 'SA' signal heads, NYC 'tombstone' milepost, and the double track mainline on a right of way that used to accommodate more than that all say Upstate New York.

Once Jason and I had started to talk about what scenes I was planning for different spots, he began to research scenes and I started to figure out the details of what would fall where.

Jason and I measured and re-measured the areas, and he did the lion’s share of the work offsite at his workshop.  He returned with almost-finished scenes and we set them in place: 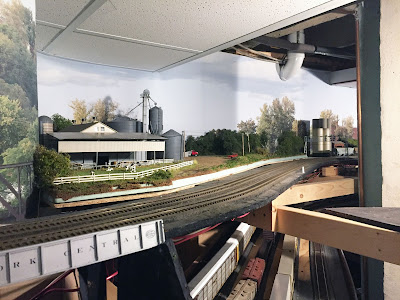 ...and then I worked to attach them permanently and blend them into the surrounding layout. 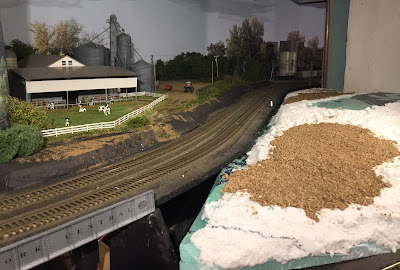 Once we confirmed that, I wired the lighting in the barns, finished the ceiling, ballasted the main line track, and worked to ready the substructure for the new addition. 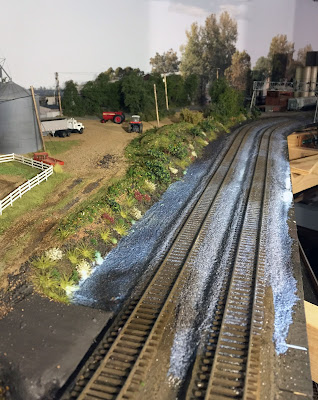 Once Jason arrived with the field, we set it in place, and with just a bit of modification it was a perfect fit.  The difference in this scene is truly incredible now.

Once the scenes were both in their final spots, I worked to ballast both the main line and the Cazenovia Industrial Track in the foreground, and to add the farmer's private grade crossing between the farm buildings and the cornfield. 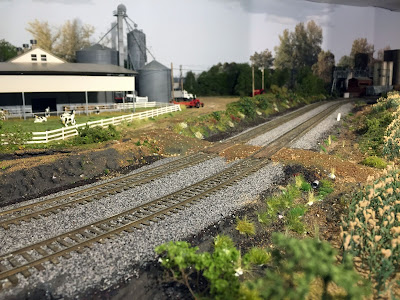 The small crossing is a perfect compliment to the scene, and is shown here while drying: 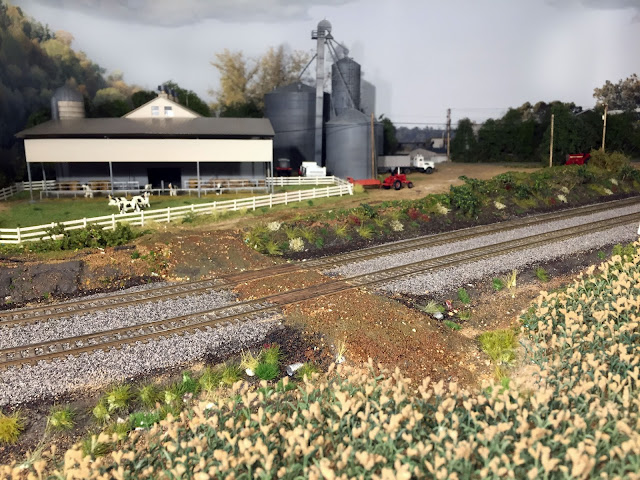 It makes for a perfect foreground, and when combined with the NYC details and Conrail operations, it’s a very plausible representation of mainline railroading in Central New York.

This is another step in the enjoyable process of including the community in not only operation but also design and construction of the Onondaga Cutoff.  Each of the aspects of this model railroad has been improved by allowing others to be involved, leading to a layout far greater than what I would be able to have accomplished myself.  And then, each month, we all get to enjoy the fruits of the labor of everyone when the railroad comes alive for a 12-hour slice of 1994.

And, of course, we're headed into the winter 'modeling season' which means more progress still.  Also coming soon is an open house on November 4, in conjunction with the 2017 Garden State Division NMRA Railroad Prototype Meet in Clark, NJ.  Details are available at  http://gsrpm.org/

Maybe we will see you during the open house!